SEEKING EQUALITY. The LGBTQ+ community in Baguio City chants for the passage of an anti-discrimination measure based on sexual orientation, gender identity and expression, and sex characteristics (SOGIESC) during their Pride Month celebration on June 25, 2022.

Nineteen of 24 senators signed the committee report on Tuesday, according to Hontiveros, who said she was “ecstatic” that the lawmakers came together to support the bill in “just a day.”

Apart from Hontiveros, the following senators signed the committee report:

Some senators signed with reservations, or stated that they would interpellate, according to a statement from Hontiveros’ office.

“The swiftness with which the committee report was signed and filed is surely a sign of good things to come,” said Hontiveros. “Umaasa ako na tuloy-tuloy na ang pag-usad ng bill na ito para ipakita at iparamdam na tunay na kasangga ng LGBTQIA+ community ang ating Senado.” (I am hopeful that the bill will continuously move forward so that we can show and make the LGBTQIA+ community feel that the Senate is on their side.)

Among the discriminatory acts the SOGIE Equality Bill seeks to make illegal include refusing admission to or expelling a person from any educational or training institution, imposing disciplinary sanctions harsher than usual that infringe on students’ rights based on their SOGIESC.

The bill would also make it illegal to deprive someone of an employment opportunity because they are gay, or deny a person access to emergency health services because of their gender expression.

Penalties include fines of hundreds of thousands of pesos. Institutions refusing to give health services based on SOGIESC for instance can be penalized with a fine of not less than P100,000 but not more than P300,000, or imprisonment of six months to two years and four months.

SOGIE bill critics have said that the bill may impose on parental authority to raise their children, or schools’ independence to discipline their students. But the bill explicitly states that nothing in the law should be interpreted to disturb the exercise of parental authority or academic freedom.

(We are depriving members of the LGBTQIA+ of their lives and livelihoods because of our beliefs and traditions that we must correct. It is already 2022, our laws should reflect the realities of our culture.) 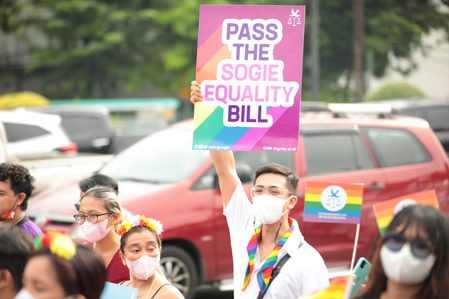 Abante, a pastor-turned-congressman, claimed that the LGBTQ+ were “clamoring” for legislated rights that are “in contravention to God’s law of creation and procreation.”

Sharmila Parmanand, a gender and human rights fellow at the London School of Economics and Political Science, said that the filing of Abante’s bill appeared to be a reaction to an “imagined threat” in the push for the SOGIE bill. – Rappler.com