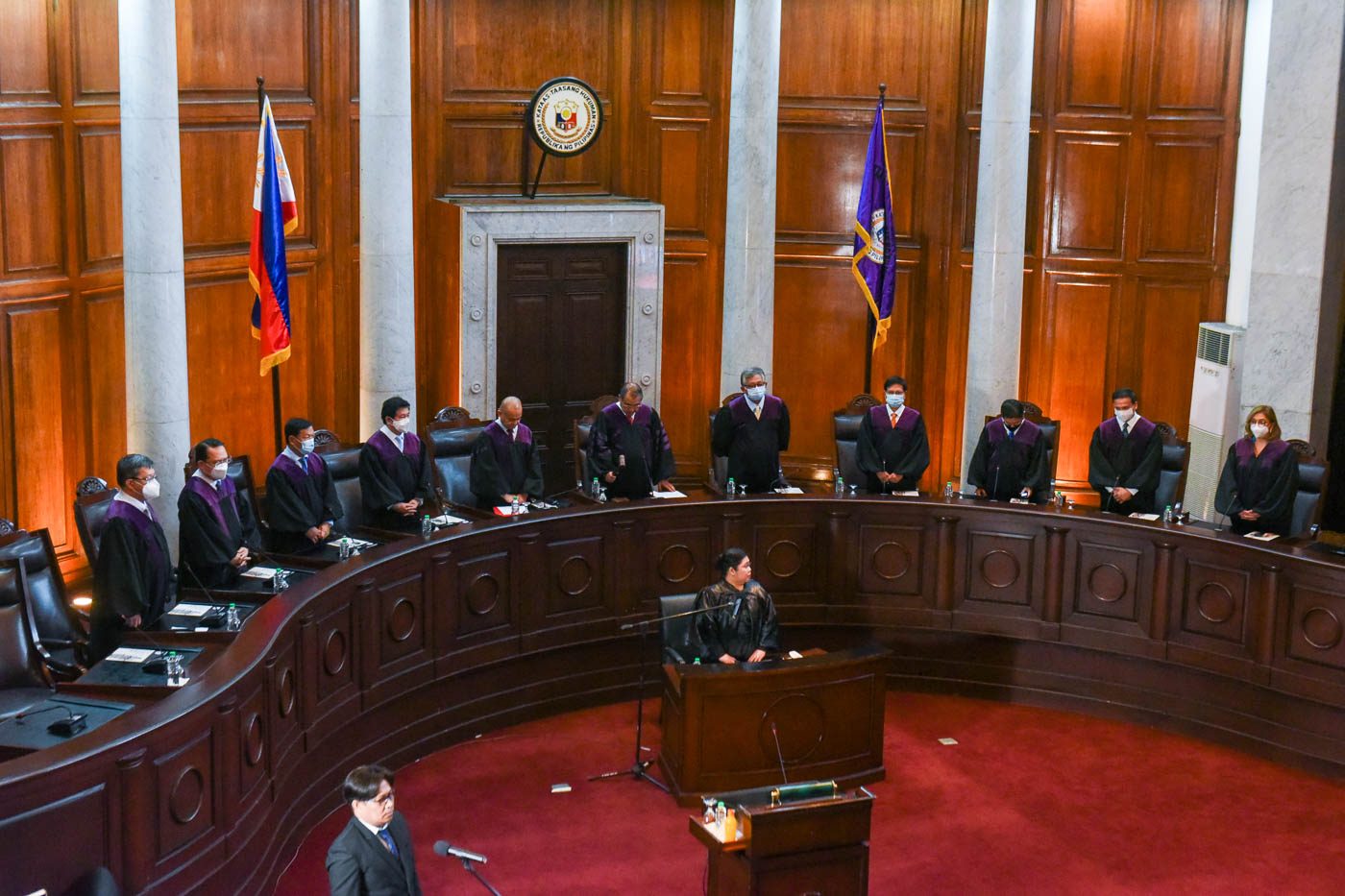 Facebook Twitter Copy URL
Copied
The Supreme Court's oral arguments last over four hours, zeroing in on whether Congress has the power to postpone the elections and extend the term of office of barangay officials

MANILA, Philippines – The Supreme Court took up on Friday, October 21, the petition challenging the constitutionality of the law that postponed the December 2022 barangay elections, with magistrates quizzing the petitioner and the government’s top lawyer.

Friday’s oral arguments lasted over four hours and zeroed in on whether Congress has the power to delay the elections and also, in effect, extend the term of office of barangay officials.

Solicitor General Menardo Guevarra, in his first time to represent the administration before the Supreme Court, stood by the law that President Ferdinand Marcos Jr. signed.

“This Court, in many of its decisions…deferred the resolution of these questions to the wisdom of Congress,” Guevarra told magistrates. “The Constitution rests in Congress the power of legislation. This power is plenary, and embraces the subject of election postponements, scheduling, and rescheduling, subject only to the limits imposed by the Constitution.”

Guevarra was referring to Article 10 Section 8 of the Constitution, which states that the term of office of barangay officials, unlike other elective local officials, shall be determined by law. 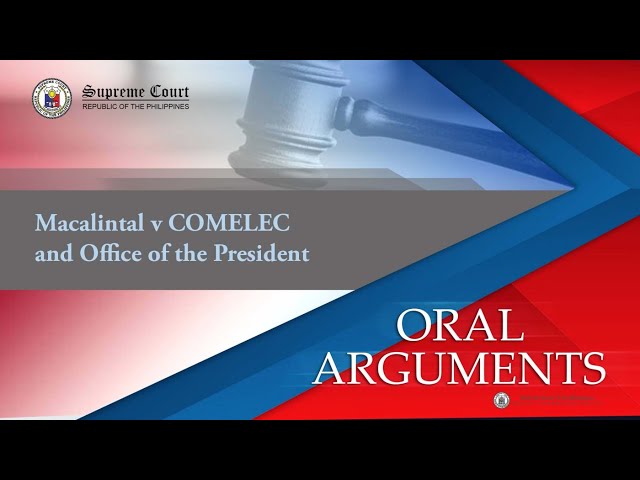 But Guevarra also answered in the affirmative when Justice Alfredo Benjamin Caguioa, who sought to “push boundaries,” asked him whether Congress could set the term of office at 100 years.

“Theoretically, yes, but that will all depend on deliberations of Congress, if they believe that setting a term of 100 years is reasonable. We view our lawmakers as reasonable human beings, that’s why we voted for them,” Guevarra reasoned.

Petitioner Romulo Macalintal, a veteran election lawyer, insisted that Congress’ powers stop at fixing barangay officials’ term of office and do not include rescheduling elections.

“The power to postpone elections is within the exclusive jurisdiction of the Commission on Elections (Comelec) after it has determined serious causes provided for under Section 5 of the Omnibus Election Code warrant such postponement,” Macalintal said.

“By enacting a law postponing a scheduled barangay elections, Congress is in effect exercising the provision of the Omnibus Election Code or has overstepped the constitutional boundaries and has assumed the functions of the Comelec,” he added.

Guevarra, however, argued that Macalintal failed to mention how the postponement of the elections is tantamount to grave abuse of discretion.

Justice Antonio Kho, a former Comelec commissioner, also pointed out the lack of such a specific allegation, as the Constitution says that the Supreme Court has the judicial power to determine whether there has been a grave abuse of discretion on the part of the government.

But Macalintal said that is already a given.

“When the issue is constitutionality, and the law is considered as unconstitutional, then that clearly shows the abuse of discretion committed by Congress,” Macalintal said.

Kho also raised the argument that had the legislature not passed the Omnibus Election Code, which authorized the Comelec to postpone elections if necessary, the power to postpone would belong to Congress.

Guevarra also doubled down on the argument that it would be better not to rush the elections under “severe circumstances.”

“An election forced under less-than-optimal conditions may wreak greater havoc to our democracy, compared to a temporary postponement decreed by legislative fear,” Guevarra said in his speech.

Several lawmakers who have pushed for the postponement of the elections cited economic reasons, saying the P8.4 billion ($142.91 million) in funds given to the Comelec can be used instead for pandemic response.

But Caguioa asserted that such is a flawed excuse, given that the Comelec has fiscal autonomy and does not need to return money to the National Treasury.

“When they say the money for this can be used for other projects, what are they talking about?” Caguioa said. “When you give us a reason for this law that the government can use that P8 billion to fight this pandemic, that is not a correct reason.”

“The Supreme Court can in fact look at this law and say, ‘Bakit nga ba (So why the postponement, really?)'” he added.

Senior Associate Justice Marvic Leonen, meanwhile, noted that pushing for electoral reforms is not enough justification to postpone the elections, perhaps in reference to a statement made by Senator Imee Marcos, who sponsored the measure in the upper chamber. Following Friday’s oral arguments, parties in the case were tasked by the Supreme Court to submit their memoranda within 15 days.

It remains uncertain how the Supreme Court would decide, but Comelec Chairperson George Garcia said they could no longer push through with the conduct of the elections in December due to the lack of material time.

“Tell us in your memorandum when you can possibly conduct the elections. That will guide us in our decision,” Chief Justice Alexander Gesmundo told Garcia.

Marcos signed Republic Act No. 11935 on October 12, moving the December 2022 barangay and Sangguniang Kabataan elections to the last Monday of October 2023.

The law was passed despite despite vehement opposition from poll watchdogs, who believe that another postponement will deprive Filipinos of their right to regularly elect their leaders. – Rappler.com