PRAYERS. The San Jose Parish Placer, following strict health protocols, replaced the foot procession with motorcade with its image of the Seu00f1or Sto. Niu00f1o along Iloilo City's major thoroughfares on January 21 as part of the 2022 Dinagyang Festival.

Facebook Twitter Copy URL
Copied
After a two-year break, the San Jose parish returns with a foot procession, featuring 15 floats carrying images of the Santo Niño, from Muelle Loney St to the San Jose Church in front of Plaza Libertad

ILOILO CITY, Philippines – Tens of thousands of devotees are expected to pay homage to the Santo Niño (Holy Christ Child) on Friday, January 20 in fluvial and foot processions as the Dinagyang Festival 2023 weekend opens after a two-year break due to the COVID-19 pandemic.

It ends at Muelle Loney Street where passengers will disembark to join other devotees in a foot procession.

The last two Dinagyang festivals were virtual editions due to health protocols imposed to prevent the spread of COVID-19.

Committee on Religious Activities chair Robert Alor said in a press conference on Thursday, Jan 19 that the PCG has imposed 50% capacity on 80-passenger fiber boats as a safety measure.

The fluvial procession represents the Santo Niño image’s arrival in Cebu. The street procession is a form of penitence and a petition for the success of the festival, Alor said.

The Church processions are separate from the secular Dinagyang festival that highlights the myth of Panay island’s indigenous Aetas bartering away land to ten Bornean datus fleeing their homeland’s despotic ruler. “Mainit nga daan and budlay magpila, basi may malipong. (It will be hot and lining up will be difficult; people might faint.) We want it to be smooth-sailing,” he added.

But at 5:30 pm at the San Jose Church, there will be a blessing for pregnant women and children.

The foot procession from Muelle Loney Street features 15 floats carrying different images of the Santo Niño, winding through Montinola, Iznart and J.M. Basa streets and ending at the San Jose Church in front of Plaza Libertad for the mass and blessing of the floats, Sto. Niño images, and devotees.

The Dinagyang Kasadyahan and Ati-Tribes Competition will roll out on the weekend, January 21 and 22, and the city government released on January 20 the competition route and road-closure guide.

The Dinagyang revved up on Wednesday, January 18 with the coronation of Raniele Shaine S. Saulog as Miss Iloilo 2023 and the sashing rites and announcement of what national contests the top three winners would join. 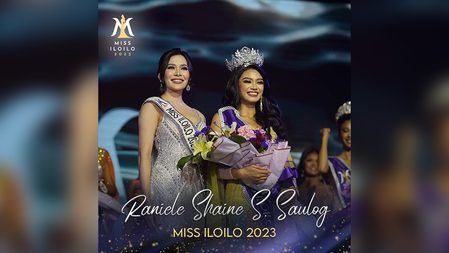 A food festival also started on January 19 on Delgado Street, showcasing the best of Ilonggo dishes like batchoy, molo, and inasal.