AID DELIVERY. A relief worker of Basey town, Samar province, brings boxes of food on January 12 to a community stranded by days of heavy rain.

CATBALOGAN, Philippines – Relief workers from Basey municipality crossed swollen rivers and streets swamped by floods on makeshift floats on Thursday, January 12 and 13 to provide food for stranded communities that have seen only a few days of sunshine since the Christmas holidays.

(We live in misery since aside from darkness, the water is high and we cannot move, even just to go to the store for food.)

The Basey local government announced an end to days of orange and rainfall warnings on Friday morning, January 13, marking a return of classes.

But few students returned to schools in affected barangays near the Golden River, where Samar Electric Cooperative crew were busy with repairs to restore power.

On January 12, the local government’s Facebook page said it had prepared food and other basic needs to 22 villages with 4,174 affected families or 20,870 individuals.

A welter of flooded roads and strong currents had delayed the delivery of raid, but the town said barangays Panugmonon, Del Pilar, Bulao, and Mabini received their shares on January 12 and were sending these to interior areas.

Relief work continued on January 13 with teams passing boxes from one person to another in areas full of mood and knee-high water.

The local government started relief work amid heavy rain on January 11, adding clothes, medicine, and even a power generator to care packages.

In Sta. Rita town, the main highway in Barangay Tulay was re-opened on January 12 but the villages of Cantaba, Magsaysay, New Manunca, Anibongon, and Canmayse, and  the two coastal barangays of Igang-igang and Cabunga-an still reported floods and power interruptions.

Five villages in Zumarraga town also had no power.

He said the coop crew would first focus on communities cleared of floods due for safety reasons.

The four substations of SAMELCO II  in Catbalogan City, Paranas, Bagolibas in Sta. Rita, and in Villareal, were not affected by floods.

In Northern Samar, at least seven villages in Catarman town had no power as of 4 pm on January 12, according to the assessment report of MDRRMO Emerald Guevarra.

The villages without power in Catarman are all located in its rural interior:  Cal-igang, New Rizal, Salvacion, Bocsol, Guba, Polangi, and Somoge.

Guevarra also reported half of Catarman town were flooded at the height of rain from January 10 to 11 but floods in 22 towns had subsided by January 12.

The MDRRMO official said that around 1,365 families or 5,448 individuals were affected in Catarman.

In Eastern Samar, where the provincial government reported 50,000 families in distress, Governor Ben Evardone extended the suspension of work and classes on January 12.

Agda said the city is already processing the release of P27 million in funds to resolve the problem.

During his visit, the mayor gave a ride to a family with a sick child who needed to go to the hospital.

The Eastern Samar News Service (ESTE News), which operates under the Commission on Social Communications of the Diocese of Borongan reported that floods were still affecting Taft and Dolores towns.

The provincial office of the Department of Public Works and Highways said that as of 8 am, January 13, the national road at Malinao, San Pablo and Mabuhay, Taft, and another stretch at Bigo, Arteche town remain closed to motorists. 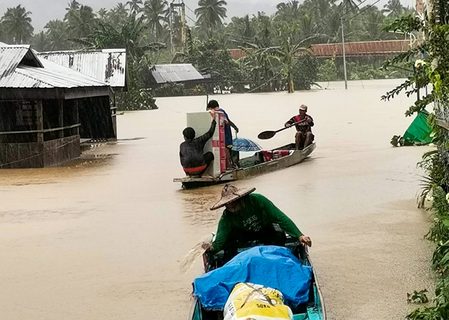