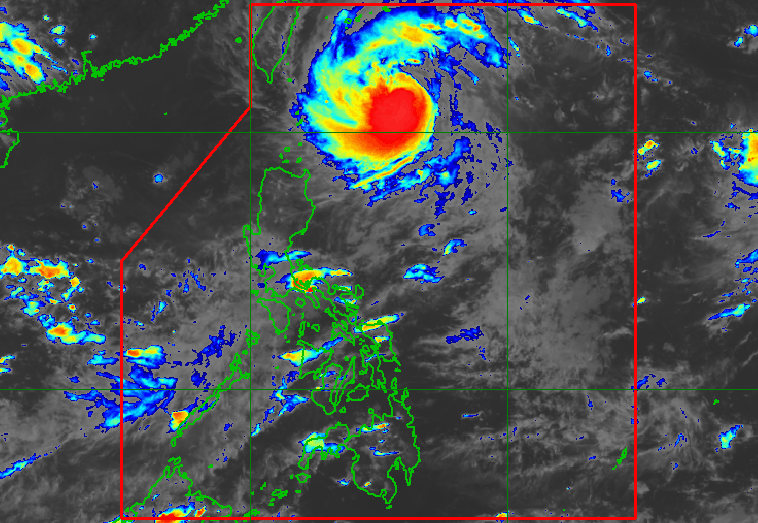 MANILA, Philippines – Typhoon Inday (Muifa) intensified further and slowed down while moving over the Philippine Sea on Saturday afternoon, September 10.

Inday’s maximum sustained winds increased from 120 kilometers per hour to 130 km/h, the Philippine Atmospheric, Geophysical, and Astronomical Services Administration (PAGASA) said in its 5 pm bulletin on Saturday. The typhoon’s gustiness is now up to 160 km/h from the previous 150 km/h.

Inday was last spotted 395 kilometers east of Itbayat, Batanes, moving northwest at only 10 km/h from the previous 15 km/h.

The typhoon is not directly bringing rain to the Philippines and it is not expected to make landfall in the country.

But its trough or extension may bring scattered rain showers and thunderstorms to extreme Northern Luzon, particularly these areas:

Inday is also enhancing the southwest monsoon or hanging habagat, which is causing scattered rain showers and thunderstorms in the following regions and provinces:

Flash floods and landslides are possible in areas affected by Inday’s trough and the southwest monsoon.

Meanwhile, it remains “less likely” for tropical cyclone wind signals to be raised due to Inday. But if the typhoon’s track shifts further west and/or its winds expand to cover a larger area, wind signals could be raised for parts of extreme Northern Luzon.

PAGASA also issued a gale warning at 5 pm on Saturday, as Inday is causing moderate to rough seas in the northern seaboard of Northern Luzon, specifically Batanes and Babuyan Islands. Waves are 2.8 to 4 meters high.

Moderate to rough seas may also be seen in the eastern seaboard of Northern Luzon, with waves 1.2 to 3 meters high. Conditions could be risky for small vessels.

PAGASA said Inday is projected to slow down further and maintain its northwest direction toward the sea east of Taiwan until Monday, September 12. Also until Sunday, September 11, or Monday, the typhoon could still gain more strength.

On Monday afternoon, Inday may slowly turn north northwest or north. It could pass close to Japan’s Miyako Islands or Yaeyama Islands between Monday afternoon and Tuesday morning, September 13.

Starting Tuesday as well, Inday may begin weakening due to “the slightly cooler waters east of Taiwan,” PAGASA said.

Finally, the typhoon may exit the Philippine Area of Responsibility (PAR) as early as Tuesday afternoon.

Outside PAR, Inday could speed up while heading north northwest over the East China Sea.

Inday is the Philippines’ ninth tropical cyclone for 2022 and the first for September.