Facebook Twitter Copy URL
Copied
'I expected a dismissal, but was still surprised that it was a landslide, with no objection,' says Bayan Muna Representative Carlos Zarate

It’s been a good couple of months for the dissenter – a unanimous vote on the electoral protest in the Supreme Court, and surprisingly enough for spectators, a unanimous vote for his political survival.

Often in the lonely company of a few fellow dissenters in the Supreme Court, at the House of the Representatives on Thursday, May 27, Leonen got 44-0 to dismiss outright the impeachment complaint against him.

Where the impeachment complaint brands him an anti-Duterte justice, and supposedly impeachable for culpable violation of the Constitution, administration ally Deputy Speaker Bienvenido Abante reacted, so what?

“Are we supposed to impeach a justice of the Supreme Court because of his political beliefs or his affiliations, or who appointed him? Is that what the Constitution states?” asked Abante.

In a rush to dismiss the complaint, committee members sang a chorus of “I second” on Zoom, which is hardly what Leonen would hear in fierce en banc debates in Padre Faura.

“A dismissal on the basis of the mere face of the impeachment complaint affirms the baselessness of the grounds raised. It is an act that powerfully speaks for itself,” Leonen said in a two-page statement on Thursday.

He praised the House leadership and the committee on justice: “It is a leadership that refuses to be used to debase and degrade sacred constitutional processes for unworthy ends.”

A little help from friends in Padre Faura

Not that he is a consistent loser in the Supreme Court. On the political side, Leonen got unanimous votes to uphold Vice President Leni Robredo’s 2016 win.

And on the values side, Leonen again got a unanimous vote to modify the interpretation of the requirements of psychological incapacity as a ground for declaration of nullity of marriage, which some lawyers thought was akin to divorce.

Administratively, Leonen is a key mover in the unanimous move of the Supreme Court to issue a statement condemning attacks on lawyers.

But most crucial to his survival, the Supreme Court also unanimously rejected the request of Solicitor General Jose Calida to get copies of his Statements of Assets, Liabilities, and Net Worth (SALN) for the purpose of a quo warranto ouster.

The en banc also issued a show cause order to Calida on the Marcos protest, but magistrates withdrew it as Leonen said he’d rather forgive. It was Marcos’ cousin, Ilocos Norte 2nd District Representative Angelo Marcos Barba, who endorsed the impeachment complaint.

That was quite a signal from the same Court that ousted former chief justice Maria Lourdes Sereno three years ago during a novel quo warranto proceeding, which the dissenter Leonen called a “legal abomination.” 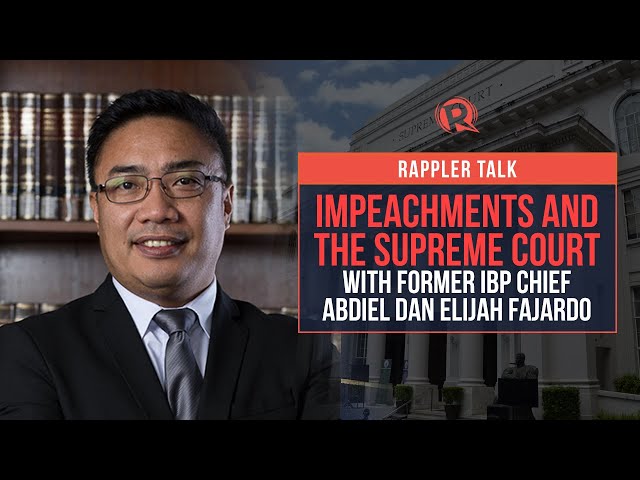 “I have been privileged by the unqualified support of the Chief Justice and the entire Court en banc,” said Leonen.

He added: “I am witness to a current Court that can easily unite on the basis of principle, open to rethinking differences in judicial standpoint when necessary when presented with a better approach for the good of our society and human dignity, always working collegially as it pursues its needed autonomy to discharge its oath to protect the Rule of Law.”

But Leonen wanted to make it clear, “there is no victory to be celebrated by anyone.”

Not specifically referring to anyone, he also said: “To the prime movers of this baseless complaint and those who have supported them, know this: I wish you well, and I wish that you will also find your own peace.”

‘I was surprised it was a landslide’

The support from the opposition members of the committee was expected, but the landslide vote still came as a little bit of a surprise.

“I expected a dismissal, but was still surprised that it was a landslide, with no objection,” Bayan Muna Representative Carlos Zarate, deputy minority speaker and an ex-officio member of the committee, told Rappler.

“Members of the committee that I talked to believe that a defective,  baseless impeachment process will only derail the House from its track of addressing pressing issues like the COVID-19 interventions in the remaining months of the 18th Congress,” said Zarate.

That’s also the messaging of House Speaker Lord Allan Velasco, saying that: “Congress can now focus more on the task at hand, which is to produce legislation that would further help our kababayans (countrymen) and the economy recover from the devastating impacts of the COVID-19 pandemic.”

Leonen can say that the dismissal of the impeachment complaint “affirms our faith in the House of Representatives,” but in the weeks to come, he will be at loggerheads again with the lower chamber.

Leonen must decide how he will vote on the House’s prized anti-terror law.

– with reports from Rambo Talabong/Rappler.com