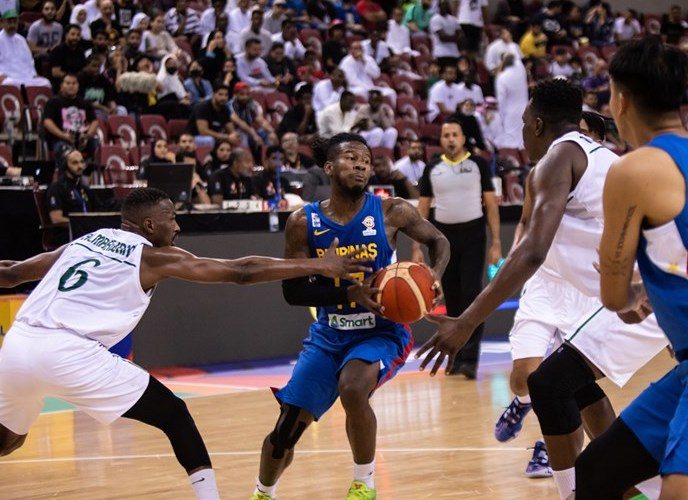 FAN SUPPORT. CJ Perez and Gilas Pilipinas draw strength from the Filipinos fans in Jeddah as they reassert their mastery over Saudi Arabia.

MANILA, Philippines – Gilas Pilipinas played thousands of miles away from home, but it hardly felt like a road game.

Chot Reyes thanked the Filipino community in Jeddah for their support as the Philippines pulled off a 76-63 win over Saudi Arabia to sweep the fifth window of the FIBA World Cup Asian Qualifiers.

“I think we got a lot of energy from the crowd,” Reyes said.

“They really gave us a huge boost. They did not allow us to lose, until we hit our stride, hit our shots in the third quarter.”

Saudi Arabia trailed by a whisker, 25-26, before the Philippines erected a 12-0 run bridging the second and third periods to seize a 38-26 lead.

Pogoy then drained back-to-back triple to give Gilas Pilipinas its biggest lead of the game at 50-34, much to the delight of the ardent Filipino fans.

A pesky Saudi side kept the Filipino hopefuls watching on the edge of their seats after getting within single digits on multiple occasions, but the Philippines finished it strong.

Reyes said he expected a tough challenge from Saudi Arabia even as their first encounter ended in a 38-point blowout win.

“Kudos and congratulations to the Saudi national team. I thought they played hard and came in with a very good game plan,” Reyes said.

“We expected it. We knew the high quality of this team.”

Gilas Pilipinas returns home with a 5-3 record before it plunges back to action in February for the sixth and final window, where it will face Lebanon and Jordan in a pair of home games. – Rappler.com