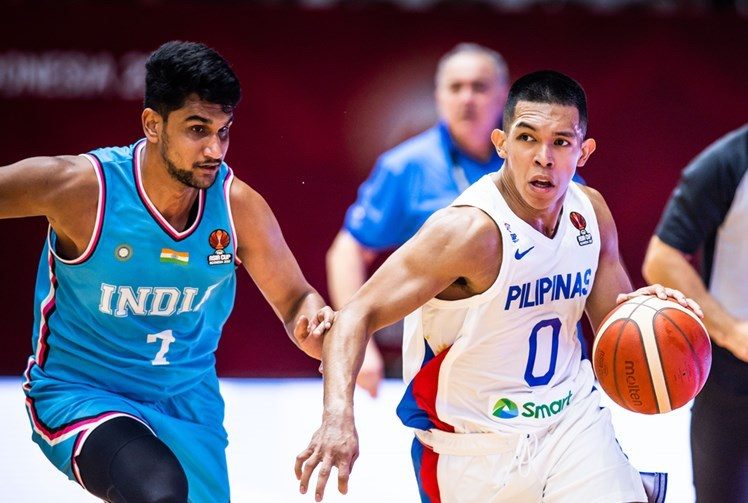 SPARK. Thirdy Ravena sets the tone for Gilas Pilipinas in its manhandling of India.

MANILA, Philippines – Three in a row.

Gilas Pilipinas reasserted its mastery over India with a 101-59 rout to pick up its first win in the FIBA Asia Cup at the Istora Stadium in Indonesia on Friday, July 15.

Thirdy Ravena scattered 12 of his 17 points in their first-half breakaway as the Filipinos beat the Indians for the third straight time this year – the first two coming in the FIBA World Cup Asian Qualifiers.

Ravena capped a 7-0 run to end the opening quarter that gave his side a 20-13 lead and scored 5 straight points for a 30-18 cushion, allowing the Philippines to coast to the 42-point romp.

That 12-point advantage grew more than three folds at the end of third quarter as Gilas Pipinas blew the game open by outscoring India 31-10 in the period for an 82-43 lead.

William Navarro led the Filipinos in scoring with 18 points on an ultra-efficient 6-of-7 clip, while Ray Parks added 12 points, 4 assists, and 3 steals.

Rhenz Abando fired 10 points in the blowout, including the three-pointer that gave the Philippines its largest lead of the game at 95-53 with three minutes left.

“Luckily we were able to bounce back from that in the second half especially we talked about it in the first half – that we played a little, a little too down, little too grumpy.”

“It just goes to show that when you play as a team and you just enjoy the success of each other, follow the system, and trust one another, things will definitely pay off.”

Carl Tamayo and RJ Abarrientos scored 9 and 8 points, respectively, in the win, while Francis Lopez posted 8 points, 5 rebounds, and 2 steals in his Asia Cup debut.

Again showcasing his passing skills, Kevin Quiambao impressed for the Filipinos with a game-high 9 assists on top of 6 points and 3 rebounds.

The win virtually secured the Philippines a spot in the knockout stage as it sits at third place in Group D with a 1-1 card, just behind unbeaten Lebanon (2-0) and New Zealand (1-1).

India resides at fourth and last place with a 0-2 slate.

Only the top team from the group will directly qualify to the final eight, while the second- and third-place squads will advance to the qualification to the quarterfinals.

Muin Bek Hafeez tallied 14 points and Pranav Prince had 11 points in the loss.