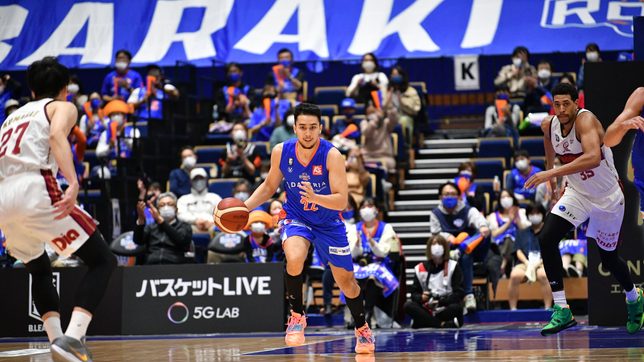 Facebook Twitter Copy URL
Copied
Javi Gomez de Liaño winds up scoreless a day after a breakthrough performance for Ibaraki, while his brother Juan also ends up empty for the win-hungry Tokyo Z

The Gomez de Liaño brothers continued their up-and-down journeys through the Japan B. League as both went scoreless in blowout losses at their respective divisions on Sunday, November 14.

Coming off a career-high 13-point outing, Javi Gomez de Liaño bottomed out to zero points on 0-of-4 shooting with 3 rebounds and 1 assist as the visiting Kawasaki Brave Thunders pummeled the Ibaraki Robots by 26 points, 93-67, in Division 1.

It was a non-contest from start to finish as the East district’s top team, now with an 11-3 record, mounted a 26-12 first-quarter attack, and never looked back since.

Two-time B. League champion Nick Fazekas cruised to a 19-point, 9-rebound, 8-assist line in just 24 minutes of action in a game where the Thunders led by as many as 27 markers, 80-53, near the start of the fourth quarter.

The Robots squeezed out a 10-0 response, but it made no difference at all as they only cut their deficit to 17, 63-80, with a little under 6 minutes left in the frame.

Ibaraki imports Marc Trasolini and Eric Jacobsen led the losing cause with 16 and 13 points, respectively, as the Robots shared the East cellar at 2-12 with the free-falling Niigata Albirex BB.

Like his brother, Juan Gomez de Liaño also failed to score over at Division 2 as the Koshigaya Alphas made light work of the winless Earthfriends Tokyo Z, 76-55.

One day after scoring 25 points on a perfect 12-of-12 clip, Koshigaya import Isaac Butts again dominated the post with 13 markers on 6-of-7 shooting to go with 8 rebounds as the Alphas maintained second place in the East district with a 10-3 record.

The win-hungry Earthfriends, now at 0-13 for the season, actually put up a fight until midway through the second quarter, where they still led, 29-28, with 4:30 left.

But that would be the last time Tokyo experienced getting ahead as Koshigaya ended the half with 14 unanswered points for the sudden 42-29 lead.

The Earthfriends’ morale failed to recover by the second half as the Alphas peaked with a 22-point gap, 71-49, off a Kohei Ninomiya triple at the 7:22 mark of the final frame.

Tokyo import Joshua Crawford led yet another sorry loss with 19 points and 8 rebounds, while fellow reinforcement Marc Norelia was held to a 9-marker, 9-board line with 4 turnovers.

While the entire Division 1 will enter a three-week break to make way for the 2023 FIBA World Cup Asian qualifiers, Division 2 action will move on as the Earthfriends continue their breakthrough quest on Friday, November 19, against the Ehime Orange Vikings. – Rappler.com