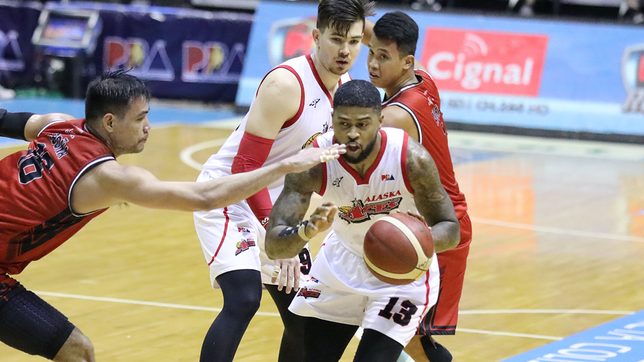 MANILA, Philippines – Victory continued to elude hard-luck Blackwater after Alaska coasted to a 98-75 romp to snap a two-game skid in the PBA Governors’ Cup at the Araneta Coliseum on Wednesday, December 22.

Maverick Ahanmisi posted 17 points, 8 rebounds, and 2 steals to lead five players in double figures as Aces improved to 3-2, and in the process, dealt the Bossing a record-extending 24th consecutive defeat.

Blackwater got off to a promising start and led 24-21 after the opening quarter but struggled offensively for the rest of the match with import Jaylen Bond enduring what appeared to be a groin injury.

Alaska capitalized on Bond having his mobility compromised as it turned the tide in the second period, outscoring its foes 29-19 for a 50-43 halftime lead.

The Aces took the fight out of the Bossing in the second half and enjoyed a lead as big 26 points.

Jeron Teng finished with 14 points, 8 rebounds, and 3 assists for Alaska, Robbie Herndon had 12 points, 7 rebounds, and 4 assists, while Mike Tolomia produced 12 points off the bench against his former team Blackwater, which traded him during the break.

Import Olu Ashaolu tallied 10 points and 7 rebounds in the win before going down with an injury in the third quarter.

Rashawn McCarthy led the way in the loss with 16 points as the Bossing were limited to their lowest scoring output of the conference.

Bond wound up with only 2 points, 5 rebounds, and 3 assists for Blackwater, which slipped to 0-5.