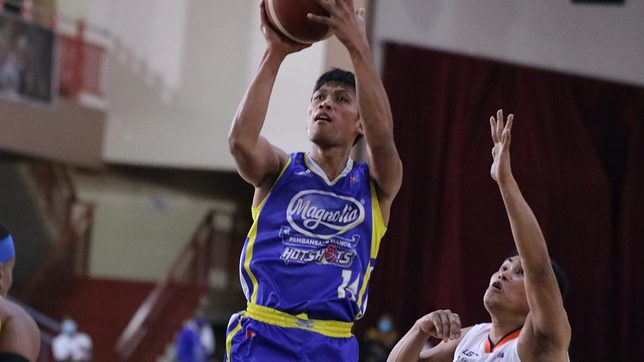 ONE MORE. Mark Barroca and Magnolia are a win away from their third Philippine Cup finals appearance over the last four seasons.

Mark Barroca did not lack motivation as he helped Magnolia move on the verge of another PBA Philippine Cup finals appearance.

Barroca churned out 17 points and 6 assists in their 81-69 win over Meralco on Sunday, October 10, that gave Magnolia a commanding 3-1 lead in their best-of-seven semifinals.

Aside from bouncing back from a lackluster outing in their Game 3 loss where he scored just 2 points on a 1-of-9 shooting, Barroca had his pregnant wife Ruselle in mind in arguably his finest performance of the conference.

Ruselle is due to give birth to their child this October, far away from her husband who is holed up in the PBA semi-bubble in Bacolor, Pampanga.

“My motivation is my wife. She will give birth without me by her side,” Barroca said in Filipino after the game.

“This is the first time that I’m away from my wife while she is pregnant. Of course, I think about it often.”

Barroca worrying about his wife and his unborn child may probably be the reason for his offensive struggles against Meralco.

In Games 2 and 3, Barroca normed just 3 points, a far cry from his conference average of 9.9 points, as he made only 3 of his 17 field goals for a horrendous 18% clip.

He also missed all of his 8 three-point attempts during that span.

“I struggled at first. So I talked to coach about it. Now, I’m focused on winning because I’m motivated to do this for my family,” Barroca said.

“I want to do this for my teammates, their families, and our fans.”

Like a true veteran, Barroca steadied the ship in the middle of a fourth-quarter Meralco storm, knocking down a crucial triple that pushed their lead to 8 points, 77-69, with two minutes left.

For Barroca, though, the job is far from done.

“Based on my experience, it is very hard to close out a series. We need to triple our effort,” Barroca said.

“They will not just give the win to us. If we were in their place and we also have our backs against the wall, we will also not let the other team win. We need to exceed their effort.” – Rappler.com