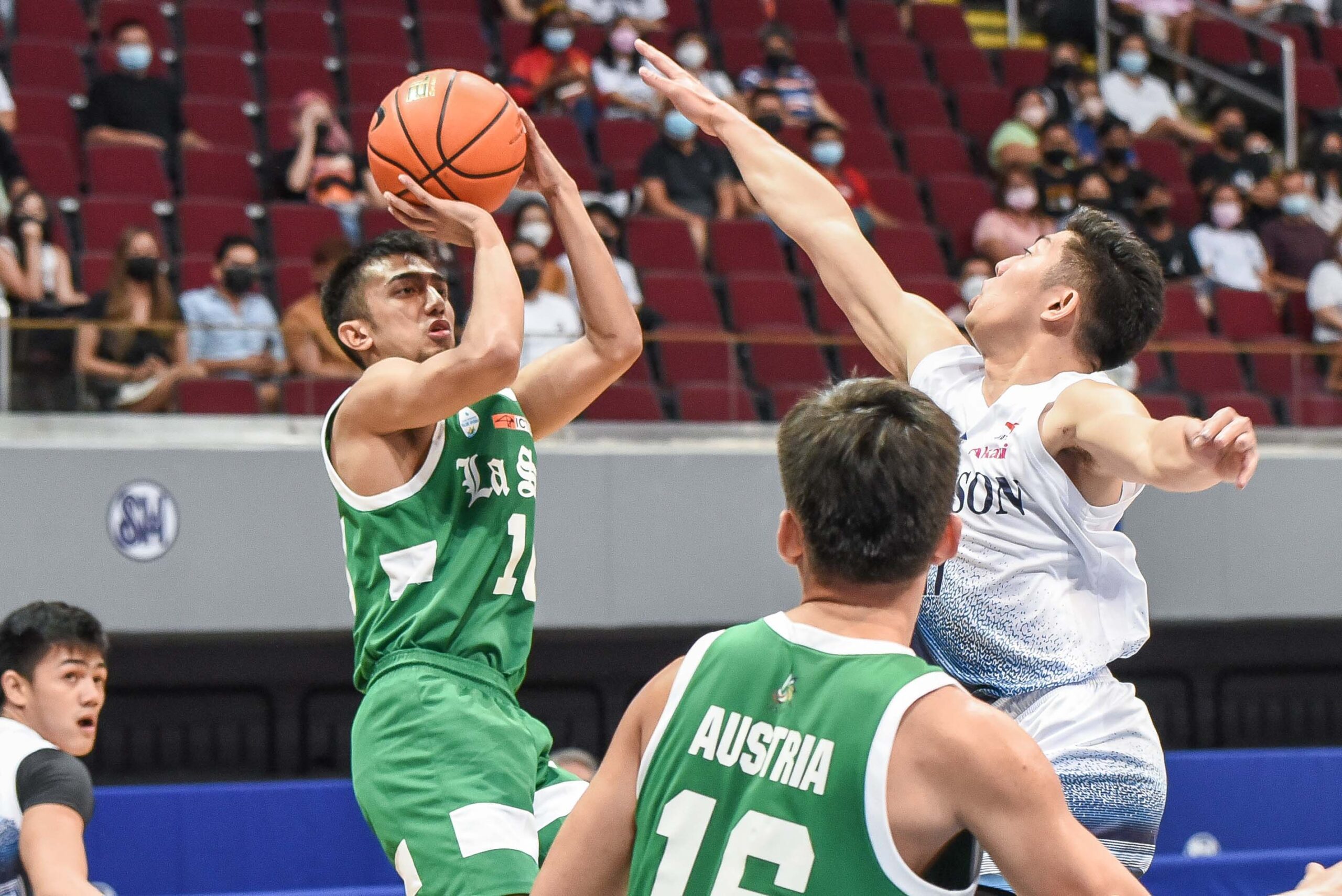 Facebook Twitter Copy URL
Copied
After a slow start to his La Salle debut, Evan Nelle flashes his skills, IQ, and leadership to help the Green Archers return to the UAAP Final Four

MANILA, Philippines – It took five years for the La Salle Green Archers to return to the Final Four round of the UAAP men’s basketball tournament.

The last time it took place was in 2017, when Ben Mbala, Aljun Melecio, and Kib Montalbo still played for the Green Archers. Aldin Ayo was still their coach.

With everything that’s happened since then, those days now feel like a lifetime ago.

Sure, the pandemic, which meant two seasons of no competition, added years to the wait, but for a proud basketball program like the Green Archers, five years must have felt more like five decades, especially given how the last two seasons played out, with fifth-place finishes.

On Thursday, April 28, the drought came to an end. While a few factors played into the Green Archers victory over the Adamson Soaring Falcons, 64-51, it was the stellar late-game play of their new leading playmaker Evan Nelle which looked most impressive at the Mall of Asia Arena.

Nelle, the former San Beda starting point guard, finished with 11 points on 5-of-12 shooting to go with 5 rebounds, 2 assists, and 2 steals. He recorded a +10 in the 27 minutes he played and was instrumental in the game-clinching fourth quarter where La Salle outscored Adamson 21-8, the same margin of victory as the final score.

“Evan took control of the ball game,” DLSU head coach Derrick Pumaren praised his starting PG in the post-game presser. “He ran rings around the guards.”

Nelle, whose return to La Salle was motivated by a desire to go back to his roots, contributed only 2 points on the scoreboard after 30 minutes of play.

In the final period, he knocked in two midrange jumpers, an open triple from the corner, and an open layup off a beautiful drive which provided the separation La Salle needed not only to control its own destiny for the Final Four, but also dispatch an opponent which was coming for their position.

The Green Archers are now 8-5, while the Soaring Falcons fell to 5-8.

But what Nelle contributed went beyond just scoring.

“He was able to execute what we were supposed to do. We were able to run what we always wanted to run. We were very patient on offense tonight,” Pumaren said.

There was an instance in the third quarter that displayed the sort of intangibles Nelle brings to the table.

While handling the ball down on offense, he used half a second to take a peek at the instructions the Adamson coaching staff were giving the Soaring Falcons on how to set up their defense.

After noticing they were in a matchup zone, Nelle directed his teammates on which spots to be on the floor. He then asked for a screen to get to the left elbow and draw the defender from the short corner because of the threat of his pull-up, opening a path for teammate CJ Austria to cut to the rim and draw a foul for free throws.

Later in the fourth period, Nelle asked an approaching Deschon Winston to leave the strong-side wing and move over to the weak-side, which allowed Justine Baltazar space to operate one-on-one in the right block. It was a mismatch opportunity. The DLSU big man then scored with a hook shot using his left hand to extend the Archers’ lead to 6, and they never relinquished it from there.

On defense, Nelle’s chief assignment was to limit Adamson’s MVP candidate, Jerom Lastimosa, who had arguably his worst game of Season 84: 11 points on 3-of-13 shooting, only 3 free throw attempts, 4 rebounds, 3 assists, 4 turnovers, and a -17.

DLSU made it a point to prevent Lastimosa’s paint penetration and forced him to either take a tough shot or dish it out to another teammate to run their team’s offense.

The Green Archers’ help defense was on point, too. The formula worked to perfection, as Adamson shot only 26% from the field – including 28% from downtown – and committed 26 turnovers.

“We lost. As simple as that,” Falcons head coach Nash Racela said after the contest. “La Salle came up with a great defensive game plan. They wanted Jerom to give up the ball. Good coaches will really do that.”

It also helps when there’s someone like Nelle who made it difficult for Lastimosa to catch the ball in the spots he wanted.

“Our whole defense focused on him,” Nelle said about Lastimosa.

The two shared a touching moment of sportsmanship after the matchup.

“I think we gave him a hard time… we were taking turns on him so [he’d] get tired,” Nelle added.

After a slow start to his DLSU debut, the skills, IQ, and leadership qualities which made Nelle one of the best high school and collegiate standouts in the NCAA are finally coming to life in the UAAP.

La Salle has accomplished the original task established by Pumaren when he returned to Taft, which was to make it back to the Final Four.

“We’re really happy to make it and achieve that immediate goal, and we just have to work our way up,” he said.

Pumaren is right. There are some clear issues La Salle needs to improve on before they once again earn the reputation of being contenders in the UAAP.

For starters, a 16-of-29 (55%) shooting display from the foul line and 2-of-16 (12.5%) performance from deep will come back to bite them if those numbers manifest again, especially against superior competition.

Will health also be an issue? Baltazar and rebounding machine Michael Phillips were able to finish the game, but both players had to nurse a sprain and cramps, respectively, during the contest.

At this point in a compressed schedule, injuries and fatigue will add up. Only the durable will survive.

With DLSU essentially locked in the third seed, is there a chance the duo misses the eliminations finale against NU on Sunday, or only play limited minutes?

“I don’t know yet what’s going to happen [with their] status,” Pumaren said, indicating it would depend on his medical team.

Until then, as Nelle put it: “The job’s not done.”

If Thursday’s contest was any indication, he seems more than up to the task. – Rappler.com