[OPINION] Should we be optimistic after the 2019 elections? 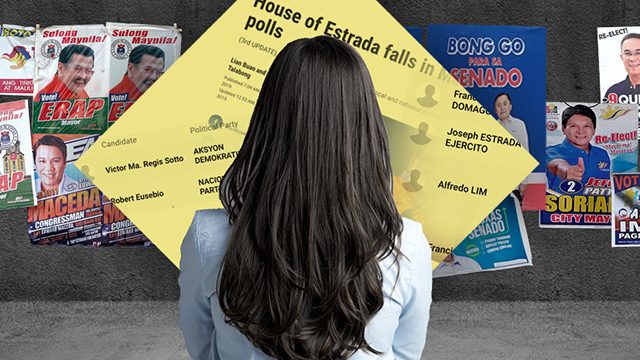 I’m Mia Gonzalez. Before joining Rappler as a senior editor, I covered Malacañang from the time of Fidel Ramos to midway into the term of Noynoy Aquino. I covered the Senate too, and had written about and observed the (d)evolution of Philippine politics.

Hours after election day on Monday, May 13, fireworks ripped through the darkness in parts of my city, Malabon, as well as in Navotas, across the river, celebrating some expected or evolving victories. I wondered if I too would be clinking glasses with my family later on, as I latched on to the hope that the 6 in 10 Filipinos who had no complete Senate slate days before the polls would choose my candidates. On election day, I had even more reason to hope. Did you get calls or text messages asking for suggestions? I know of at least 4 people who had that experience – enough to buoy my own optimism that there would be miraculous upsets in the Senate race.

Based on unofficial results, with 97.36% of precincts reporting as of 8:57 am on Thursday, May 16, it’s become apparent: Walang himala.

Instead of sipping bubbly as I enjoyed the fireworks display in the distance, I joined – in thought – the millions who chugged down alcohol straight from the bottle to snuff out the nuclear explosion in their hearts.

The optimist in me says it’s still too early to say how the country’s new set of leaders would affect our lives, but a quick check of the new configuration of Congress, particularly the Senate, may give you an idea. Based on the positions of winning candidates on key issues in preelection debates, here is the Philippines under the new Senate, in movies:

But who knows? Fact is stranger than fiction, and instead of being the good soldiers of President Rodrigo Duterte that they had promised to be, some of them would be forced to become loyal servants of the Filipino people. Allies are made and lost, depending on mass support for the ruling power, and as the Philippine chief approaches, and assumes, lame-duck status.

In which case, the Philippine politics film festival may feature these blockbusters around the next campaign period:

Based on my personal observation as a political journalist, and which Pulse Asia president Ronald Holmes has also pointed out, public sentiment makes or breaks policies. Campaign posters still litter the streets, but politicians have already set their eyes on the 2022 elections, as election lawyer Emil Marañon has said.

While there were those who searched online and tweeted about migrating when the Senate election results were released, we know that many of them were just venting out their frustration. Many thought this way too when Erap Estrada won in 1998, remember?

Things can even get worse beyond 2022, but I have reason for hope.

The results of the 2019 elections indicate that the local races are largely immune to the so-called Duterte magic. Indeed, in areas where there remain pockets of resistance – if you can call them that – there are small joys to be had.

In my native Malabon City, Mayor Len Len Oreta – the Liberal Party candidate and first cousin of former president Noynoy Aquino – and Jaye Lacson won against Duterte’s anointed Navotas power couple Jeannie Sandoval and Congressman Ricky Sandoval, respectively. The victory is perhaps sweeter for Oreta, who was the object of Duterte’s vilification campaign. In a campaign rally in Malabon, he had threatened to have the mayor arrested if he didn’t solve the drug problem in his city in a month.

While Pasig mayor-elect Vico Sotto got Duterte’s endorsement  – 4 days before election day – he had been touted as the man seen to end the Eusebio clan’s nearly 3-decade rule in Pasig City back in October 2018, when he decided to run for local chief executive. While his uncle, Senate President Tito Sotto, is an administration ally, Vico has been known to speak out about the false information peddled by Duterte and his minions.

The 2019 elections was also witness to Joseph “Erap” Estrada’s political sunset. The Estrada brand that brought him all the way to the presidency and earned Senate terms for two of his children and other local elective posts for his relatives, had lost its appeal, to put it kindly.

Janelle Estrada lost to Francis Zamora in the San Juan mayoralty race, ending her clan’s 50-year control of the city. What’s even more telling is that Janella’s father, Jinggoy Estrada, did not even land in San Juan voters’ Magic 12 in the Senate, coming in at 13th place. His half-brother, JV Ejercito, ranked 3rd, though.

Nationwide, based on partial, unofficial results, JV was at 13th place in the Senate race, behind Nancy Binay who led by more than 200,000 votes. Jinggoy was at 15th place.

Erap was not alone in his misery. In Makati, former vice president Jejomar Binay and his namesake Jejomar “Junjun” Binay Jr  lost in their bids for congressman and mayor, respectively.

Unlike the Estradas, however, the Binays remain the most powerful political family in their turf as Abby Binay won a second term as mayor, while her husband, Makati 2nd District Representative Luis Campos, was also reelected.

There are other bright spots in the elections that shouldn’t be overshadowed by the cloud of doom cast by the Senate results.

Victory in the polls was sweeter for two candidates who had survived attempts on their lives: reelectionist Mayor Lakambini “Neneth” Reluya of San Fernando, Cebu; and Moises Padilla town Vice Mayor Ella Garcia Yulo who was elected as mayor.

Read about other candidates who were similarly vindicated in the polls here.

There are also Raissa Laurel and Jokat Ledda, who won as councilors in San Juan City and Balaoan town in La Union, respectively. The two were among the 44 injured in the explosion outside De La Salle University in Taft Avenue, Manila, following the bar examinations on September 26, 2010. Laurel lost both legs while Ledda lost her left leg in the incident.

As previous elections have shown, being a celebrity doesn’t guarantee victory in the polls. Celebrities who aspired for elective posts had their share of losses, among them, Be Careful with My Heart star Richard Yap who failed to unseat Raul del Mar as Cebu’s 1st District representative.

There were other actors-turned-politicians who had better luck, among them, gubernatorial bet Daniel Fernando who won in Bulacan by a landslide.

Check how other celebrities fared in the midterm elections here.

Do you want change?

There are other places where voters didn’t want change, apparently content with the kind of leadership they have, flawed as some may be. Better the devil you know than the devil you don’t know, as many people continue to realize long after the 2016 elections.

In the meantime, I will keep a mental image of the expansive wall in front of our gate plastered with campaign posters, which used to make me grimace every time I leave and return to our home.

You see, that wall is covered with posters of “Tatay Digong’s Choice”  for my city. The President gave a thumbs-up sign as he held up the failed candidate’s hand, both of them bearing the smile of expectant victors. For now, that smile of victory is mine. – Rappler.com