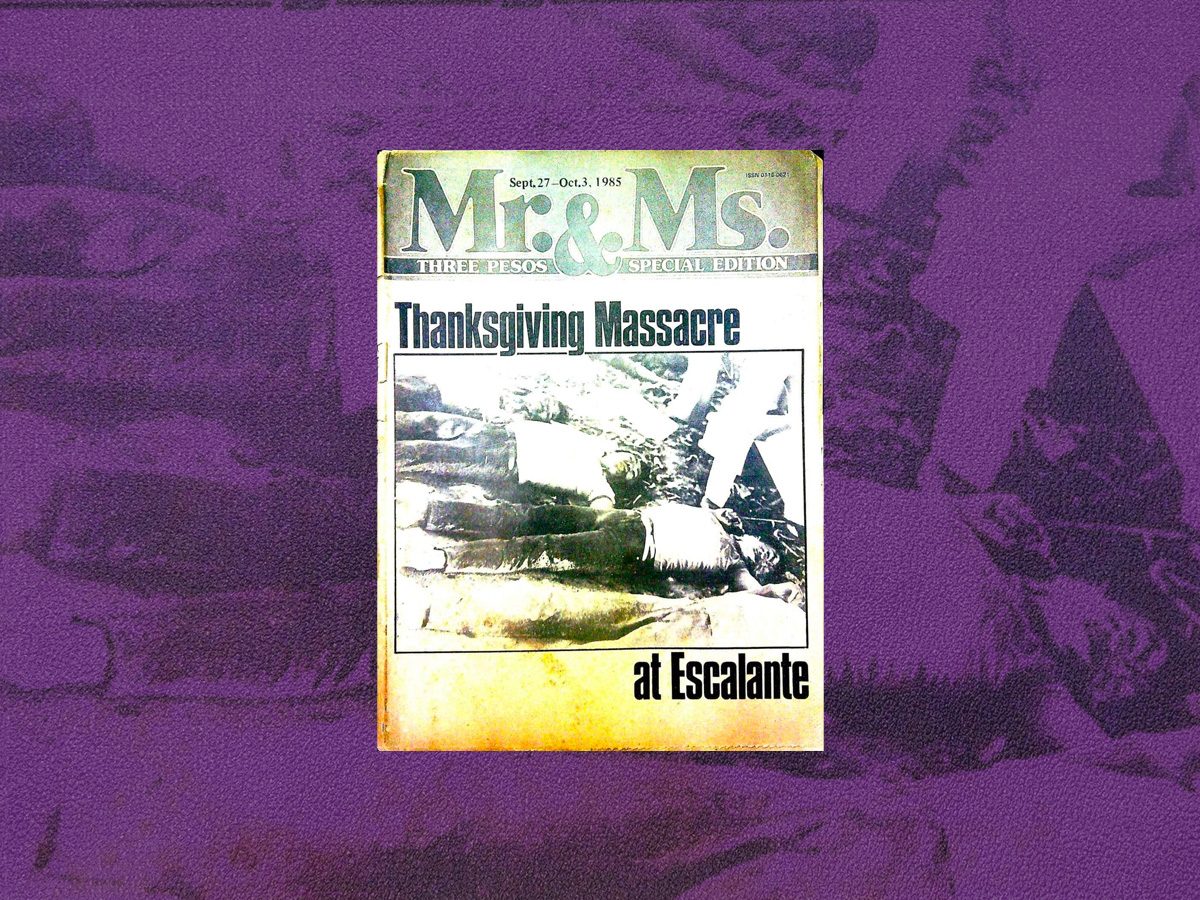 I had just returned from my university years in Manila in March 1985.

My first byline as a journalist appeared atop a feature on flooded streets and dry faucets in Bacolod City, the capital of Negros Occidental. But for the rest of my tenure as a local reporter and correspondent for national dailies and wire agencies, the copies I hammered out on dad’s typewriter and phoned in (long distance, collect) were full of death.

From the frebel-infested CHICKS area (Candoni, Hinoba-an, Ilog, Cauayan, Kabankalan, and Sipalay) in the south to Escalante on the province’s northern side, clashes, protests, salvaging, and massacres cropped up almost weekly.

Within two months of arrival, I was parked on the grounds of the provincial hospital, where the pediatric ward was chock full of what magazines and newspapers would soon call the “Batang Negros.”

Joel Abong was only one of the many Negrense children suffering from malnutrition – 350,000 in 1985, according to the National Nutrition Council of the Philippines. Ten percent of our child population was like Joel, severely malnourished, dying from pneumonia on top of the tuberculosis that wracked his body. He and other children in that ward were of school age but had the weight of toddlers – 15 pounds, 20 pounds. He could not talk; his eyes could not track the fingers of doctors. Internal organs, starved of nutrients, were shutting down.

Nanay, Dr. Lourdes L. Espina, was head of the pediatric ward but she granted no favors. Medical staff were too busy saving lives to have journalists interrupt their grind.

Like other journalists, I waited outside the building or on the small patio of the adjacent chapel, where nurses broke down during breaks and despairing parents hugged each other.

“Why?” was the question that floated in the humid air.

“Why?” was the whispered question Nanay asked as she stared at her dinner plate.

The answer was martial law. A decade of dictatorship left cronies free to plunder. In the sugar industry, once credited for the high peso value because of earnings from the US sugar quota, a small group of men led by Roberto Benedicto controlled the sugar trading monopoly under Philsucom and Nasutra.

The sales talk was, these agencies would take care of the ups and downs of sugar prices, holding back income when prices were high to subsidize producers when these went down. “Nobody showed any accounting of how the figures were arrived at,” according to sugar planter Joey Gaston. Income slowed to a trickle and many sugar planters could not pay crop loans.

Output steadily waned. Some planters let workers plant other crops on their land. But there was never enough money. Many farm owners abandoned their estates; the crisis had radicalized sugar workers, who swelled the ranks of the communist New People’s Army.

I was then part of an independent group of journalists called COBRA-ANS (Correspondents, Broadcasters, and Reporters’ Association-Action News Service) that put out a mimeographed daily newsletter for colleagues who wanted a deeper dive into issues.

The local military command called us “enemies of the state.” I learned this while covering a provincial peace and order conference – our names were scrolling up on a big screen.

In September of 1985, while covering a Welgang Bayan (People’s Strike), an alert came. Paramilitary troops had opened fire in Escalante. We rushed there to see marks of blood on the street fronting the town hall. Behind the rally area, a bank’s facade was riddled with the marks of bullets from an M-60 machine gun.

Some bodies were still on the wide veranda fronting the town hall. We approached but froze as the machine gun swung in our direction.

A friend smuggled me inside the local hospital. Wounded youth cried out for their mothers. Sugar workers groaned. Doctors threw out curses at the men who had caused so much mayhem amidst a peaceful rally.

My byline came out in the Mr&Ms issue that bannered the massacre. But I had lost my copy and only got hold of the story again when Karl Patrick Suyat of Project Gunita included it in their digital library.

Most survivors we interviewed then would not give their names, for security reasons. One of them was a young student whose life was saved when a male companion threw his body over hers. Her savior died.

Two decades later, in 2016, I tracked down Virgirita Calinog. They were all prone on the ground, she said. There was no skirmish. The assailants shot to kill. Virginia still wept at the memory. So did Bernardino Patigas, who felt the heat of gunpowder as a hail of bullets exploded around him “like burning coal.”

In 2019, Patigas, then 72 and a councilor of the town, was shot dead in a daylight ambush after being red-tagged by local state authorities.

Negros once more had become a killing ground – dozens of sugar workers and farmers, lawyers, and human rights defenders felled in northern Negros Occidental and Negros Oriental in the time of Rodrigo Duterte.

The tentacles of Maros and martial law are long and tangled in the rich earth of my home province. In the May 2022 elections, scions of sugar families with links to the older Marcos backed his son, now president. They shrug off the memories of hunger and deaths for the sake of power, and will fete Ferdinand Marcos Jr. in the first post-pandemic Masskara festival in October.

It’s no wonder the rumblings of our social volcano again grow louder. – Rappler.com