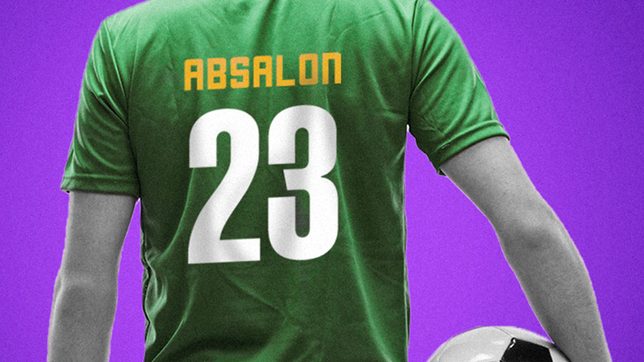 Facebook Twitter Copy URL
Copied
'No apologies are enough. Actions are required.... Ban the use of landmines, now!'

Kieth Absalon will best be remembered as a member of a football team that made history by winning the UAAP HS Football Championship for one whole decade, from 2011 to 2020.

Never before and perhaps never again can this incredible feat be replicated.

Kieth, the staunch all-around scholar-athlete, started as a striker, took on the role of wingman, was a bruising defender, and because of his ball handling prowess was designated midfielder of the FEU Baby Tams squad.

Midfielder with a mission

It was this midfield position, the link creating the flow between defense and offense, where Kieth excelled in. He was the key member in the team, helping create scoring possibilities for others, which his coaches noted early in his development. He was named UAAP Season 78 Most Valuable Player, named Best Midfielder in Seasons 79 and 81, and selected regularly as a member of the Mythical Eleven. He was thus recognized as among the most promising booters in the country.

Kieth was the youngest ever recruit to the Tams team as a grade schooler, and played multiple positions in the UAAP champion team from 2013 to 2019. His dream was to be a midfielder for the Philippine Azkals. He represented the Philippines in the 2018 AFF Under-19 tournament in Indonesia, and had the skills, the strength, and the stamina to emulate the example set by some of his elder Tamaraw brothers like Paolo Bugas to represent his country in international tournaments.

Chester Gio Pabualan, his teammate of almost a decade and a roommate at the FEU Diliman quarters, remembers him as a loveable companion, a reliable friend and the “playmaker” in the squad. Kieth’s skill in moving the ball with short passes or sudden runs, his capacity to distribute it instinctively to the wingmen or the attacking forwards, was legendary. Equally valued was his readiness to defend and to prevent opposing strikers from shooting for goal. Kieth was a total football player with a high football IQ.

John Renz Saldivar recalls Kieth as the boy who worked hard, was dead-serious in his drills, and always performed his best during the games – one game at a time – giving honor to his number 10 jersey in green and gold.

Kieth came from humble beginnings and had to endure the rigors of practice and the discipline of the sport from a young age. Master Kim, his first coach at FEU, was a tough taskmaster who did not mince words and had his team running at the break of dawn, practicing before the early morning bell for class, and heading back to the playing fields for scrimmage soon after classes ended.

Coach Bae Bo, his present Korean coach and soft-spoken mentor of the last several years, instilled iron-clad discipline in the team and required high footballing standards. Indeed, the boy Kieth excelled with a high AQ (adversity quotient) as he battled against the odds, with a background less comfortable and more demanding than the ones enjoyed by his opponents from other schools. From a young age, he knew the meaning of struggle and survival!

My time as consultant on the formation of scholar-athletes at the school coincided with Kieth’s ascendance as a bright footballing star who kept his feet planted on solid ground. During our team-building sessions at the athletic office in Diliman, or during informal sessions on the football pitch, I would always notice this unassuming informal leader of the squad with his shy smile and friendly demeanor. If you needed the team to come together, and lift their spirits up to prepare for crucial games, one could rely on Kieth. Just as I considered other scholar-athletes in the diverse teams I worked with as part of one’s family who always had each other’s back, I considered him like my own son. It is the reason why I take his death as a personal loss.

At the time of his death, he was enrolled at the school’s Institute of Education, aiming for a Bachelor of Science Degree in sports science and management. But life has a strange way of upending our dreams. A chronicle of a promise cut short

Masbate has become some sort of “no-man’s land.” Violence and armed conflict take place with impunity and human life has become cheap. Combined with improvised explosive devices and other weapons wielded either by combatants or criminals to intimidate or kill people on different sides of the political divide, innocent civilians who pursue normal activities like biking to the next town (as they were doing that fateful day of June 6 to visit relatives) or roaming the roadsides can at times become victims of a deadly cycle of violence.

The case of Kieth and his cousin Nolven, a trade-union leader of workers in an electrical cooperative in Masbate, whose bike’s front tire hit the trip wire that detonated the deadly device, are gruesome testimonies of senseless deaths that could have been avoided. Landmines have no place in a civilized society. They cause senseless deaths in the scourge of violence that brings about a total disregard for the sanctity of human life.

The FEU Men’s team where he played as part of the starting XI even as a rookie in the disrupted UAAP season mourns his loss. At the same time, the country’s football community share in the grief: they have lost a player of outstanding talent who could have proudly flown the Philippine colors as a member of the country’s XI in international contests abroad.

Ban the use of landmines, now!

The deaths of the Absalon cousins are not the first, but our prayer is that they be the last.

The NPA Bicol command has apologized for the deaths of these innocent lives, which they had caused. In the name of the people, the NPA wage their war, or so they claim. But, it is the people – the civilians caught in the crossfire – who often are the principal victims in this war that sees no end.

No apologies are enough. Actions are required. The use of improvised explosive devices serving as anti-personnel landmines, some of which are victim-detonated, are never acceptable. They are absurd, and show the futility of indiscriminate violence which takes place in situations of armed conflict.

There is only one imperative. Stop the use of landmines, now! Moreover, the interminable armed conflict in our midst, which has witnessed numerous victims, a majority of whom are innocent civilians (what the IHL calls persons “dehors de combat” – those not engaged in the armed conflict), has to stop. What is needed today, sooner rather than later, is a negotiated political settlement bringing the parties to the conflict to the negotiating table. We have to put an end to more than half a century of bitter fighting – soon, even before the electoral season begins in 2022 and another round of potential violence erupts in our midst, including in provinces which have become hotbeds like Masbate.

Even now, the red-tagging in the context of the Anti-Terror Law presently contested before the Supreme Court has caused numerous deaths, especially among those who defend the impoverished in our midst. We thus see a long list of our best, bravest, and brightest killed: human rights defenders, lawyers, journalists and media practitioners, cause-oriented advocates. Simply because they dare to think differently, they have been targeted by trigger-happy members of the armed forces and the national police, who feel protected by the powers that be in the present climate and culture of impunity which prevails in our land.

“Ode to an Athlete Dying Young”

Allow me to share a personal story that begs to be told. When our own son, Rogifort Acuna, died at the age of 21 in the act of saving his mother and youngest brother Renzo from certain death in a tragic accident nearly three decades ago, I recall citing A.E. Houseman, the poet who penned the “Ode to an Athlete Dying Young,” when I was asked to speak about our son in the school chapel.

His passion was playing basketball, and his lanky frame – nearly 6 feet tall – made amends for his awkward athleticism. But still he liked to be considered an athlete, perhaps more than as a scholar. Thus, I recited these lines from Houseman which I deem relevant even now:

“The time you won your town the race,
We chaired you through the market place.
Man and boy stood cheering by,
And home we brought you shoulder high.

“Today, the road all runners come,
Shoulder-high we bring you home
And set you at your threshold down,
Townsman of a stiller town….

“Now you will not swell the rout
Of lads that wore their honors out,
Runners whom renown outran,
And the name died before the man…”

Watch over your loved ones and the young people in our land who love to play, sing, and dance, and, yes, bike. – Rappler.com

Ed Garcia is a framer of the 1987 Constitution, and a former professor at the Ateneo and UP. He was FEU’s Formator of Scholar-Athletes from 2014 to 2020.