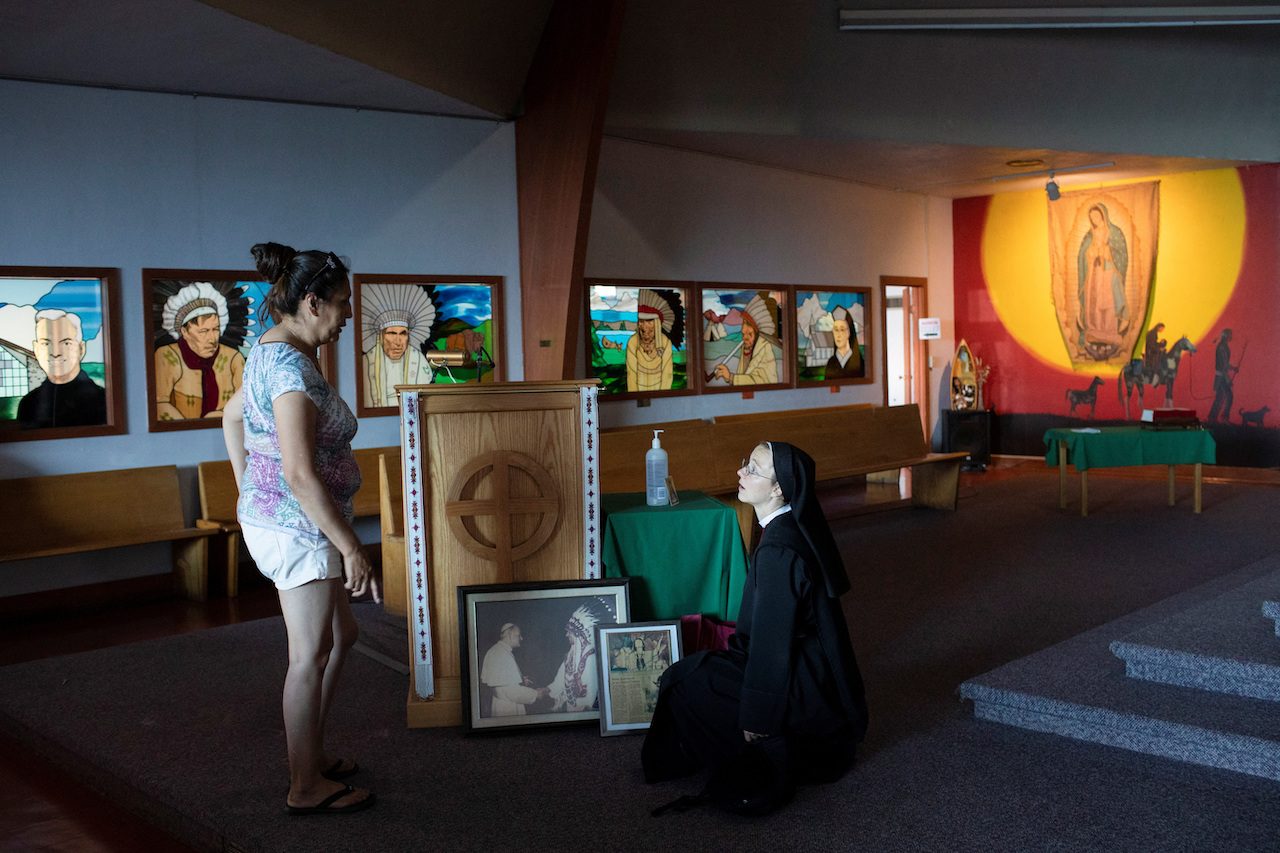 PREPARATIONS. Parish council chairperson Glenda Soosay and Sister Monika from the Congregation of Sisters of Merciful Jesus work to prepare the church ahead of the visit of Pope Francis to Our Lady of Seven Sorrows in Maskwacis, Alberta, Canada, July 22, 2022.

EDMONTON, Canada – Pope Francis is scheduled to land in Canada on Sunday, July 24, on what he has called a “pilgrimage of penance” to apologize for the abuse indigenous children endured at the hands of largely Catholic-run residential schools.

He is expected to touch down in Edmonton in the western province of Alberta at 11:20 am MDT Sunday morning (1720 GMT or 1:20 am Monday Philippine time) – the first of three stops across the country. He is also visiting Quebec City and Iqaluit, the capital of the territory of Nunavut, and departing on Friday.

Initial blocs of free tickets for the public were spoken for within 10 or 20 minutes of being made available, a spokesperson for the Canadian Conference of Catholic Bishops (CCCB), which is organizing the trip, told Reuters.

Organizers said a final bloc of tickets was made available on Friday.

Thousands of tickets are being set aside for indigenous survivors of residential schools, according to the CCCB spokesperson. Indigenous leaders in Treaty 6, the Pope’s Alberta stop, have said they were overwhelmed with queries from survivors wanting to attend.

Between 1881 and 1996 more than 150,000 indigenous children were separated from their families and brought to residential schools. Many children were starved, beaten and sexually abused in a system Canada’s Truth and Reconciliation Commission called “cultural genocide.” While Canada’s leaders have known about high numbers of children dying at the schools since 1907, the issue was thrust to the fore with the discoveries of suspected unmarked graves at or near former residential school sites last year.

In response to pressure stemming from those discoveries, Pope Francis apologized for the Catholic church’s role in the schools earlier this year during a visit by indigenous delegates to the Vatican.

Now he is coming to apologize on Canadian soil. But survivors and indigenous leaders have told Reuters they want more than an apology.

Many have called for financial compensation, the return of indigenous artifacts, the release of school records, support for extraditing an accused abuser and the rescinding of a 15th-century doctrine justifying colonial dispossession of indigenous people in the form of a papal bull, or edict. – Rappler.com