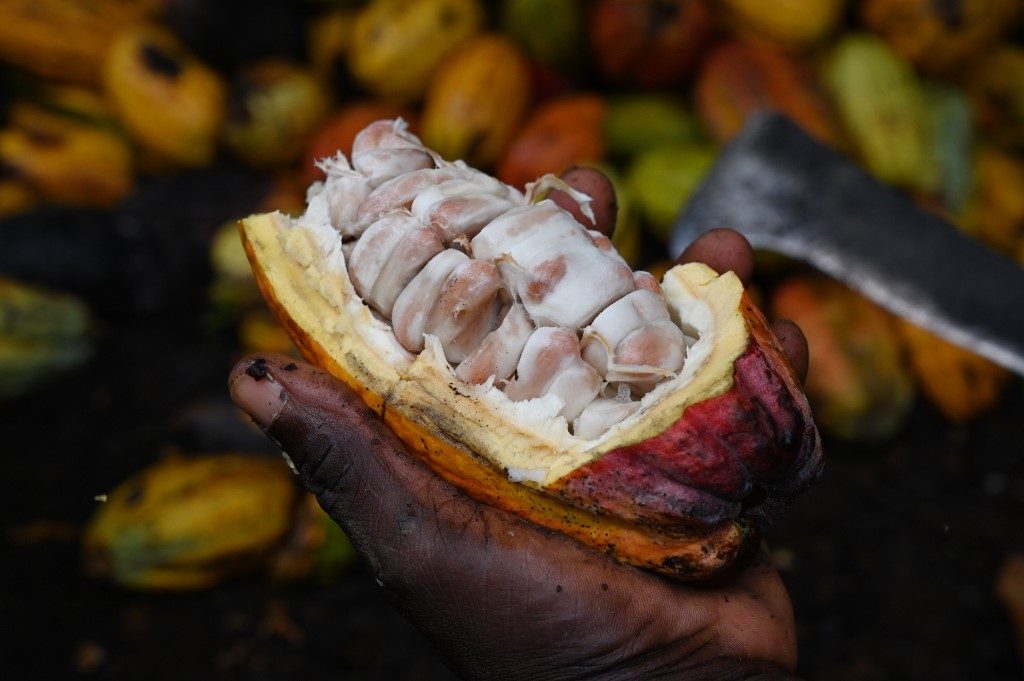 COCOA. An Ivorian farmer breaks a cocoa pod with a hooked knife at a plantation near Sinfra, Ivory Coast, on October 12, 2019.

Facebook Twitter Copy URL
Copied
'Ivory Coast and Ghana are right to push the multinationals to face up to their responsibilities,' says an expert, 'but their aggressive language is pushing things rather far'

The world’s two biggest cocoa suppliers, Ivory Coast and Ghana, have taken a tussle with chocolate multinationals to the battlefield of public opinion.

In an unprecedented move, the cocoa boards of the two West African countries have publicly accused United States chocolate giants Mars and Hershey of sidestepping a deal designed to shore up income for poor farmers.

Both companies deny the charges.

At stake is a 2019 arrangement called the living income differential, or LID, under which multinationals pay a premium of $400 above market price for each ton of cacao, the raw material for chocolate.

In a joint letter on Monday, November 30, Ivory Coast’s Coffee Cocoa Council (CCC) and the Ghana Cocoa Board (Cocobod) accused Hershey of reportedly making a large purchase of cocoa on the futures market.

The move, they charged, “clearly indicates your intention to avoid paying the living income differential.”

The two boards said they had “been left with no choice but to cancel all sustainability programs with which your company is involved.”

These schemes certify that the chocolate is ethically produced, which lets the firms to embellish their image with consumers. Production must avoid deforestation and be free of child labor.

In a separate statement, the CCC and Cocobod accused Mars of modifying its cocoa butter procurement processes to avoid paying the LID, a scheme supported by the campaign group Fairtrade.

The CCC and Cocobod condemned what they called Hershey’s and Mars’ “clear breach of faith” in the LID scheme.

In a statement to Agence France-Presse, Hershey’s said it was “unfortunate” that the countries had decided to “distribute a misleading statement…and jeopardize such critical programs that directly benefit cocoa farmers.”

Mars Wrigley said it “categorically disagrees” with any suggestion that it had switched cocoa buying practices to avoid paying the LID, and said it had long supported the initiative.

Until now, the CCC and Cocobod have been virtually invisible to the general public, and their allegations about trades have shed light on a cocoa market that is notoriously opaque.

To add to the pressure, cocoa farmers are going to stage simultaneous protest marches in both African countries on Thursday, December 3.

“The strategy…is based on public relations, and that’s new,” a cocoa trader said.

“They are going to make a noise, the press are going to get involved, and the balance of power may swing in their favor, because ethical questions have become important for western consumers” of chocolate.

The approach clearly has political traction.

The world’s chocolate market is estimated to be worth more than $100 billion, concentrated in a small number of multinational corporations.

But only 6% of the bonanza trickles down to the farmers in tropical countries which grow the raw product.

Ivory Coast accounts for more than 40% of global output, and Ghana at least 20% of it. More than half of their growers live below the poverty line, according to estimates.

How the PR offensive will pan out is unclear, say market insiders.

Tensions between cocoa producers and the chocolate giants have had an upward pressure on the cacao markets in London and New York, but at the same time, world consumption is below par because of the coronavirus pandemic.

“The thing is, Ivory Coast and Ghana are right to push the multinationals to face up to their responsibilities,” said one expert, who asked not to be named.

“But their aggressive language is pushing things rather far…it’s not clear whether this is the smartest strategy.

“Last year,” the trader added, “Ivory Coast and Ghana imposed the LID on the industry but gave nothing in return, such as efforts to improve traceability for example.

“If the tug of war continues, who will be the winner? It’s a dangerous game.” – Rappler.com