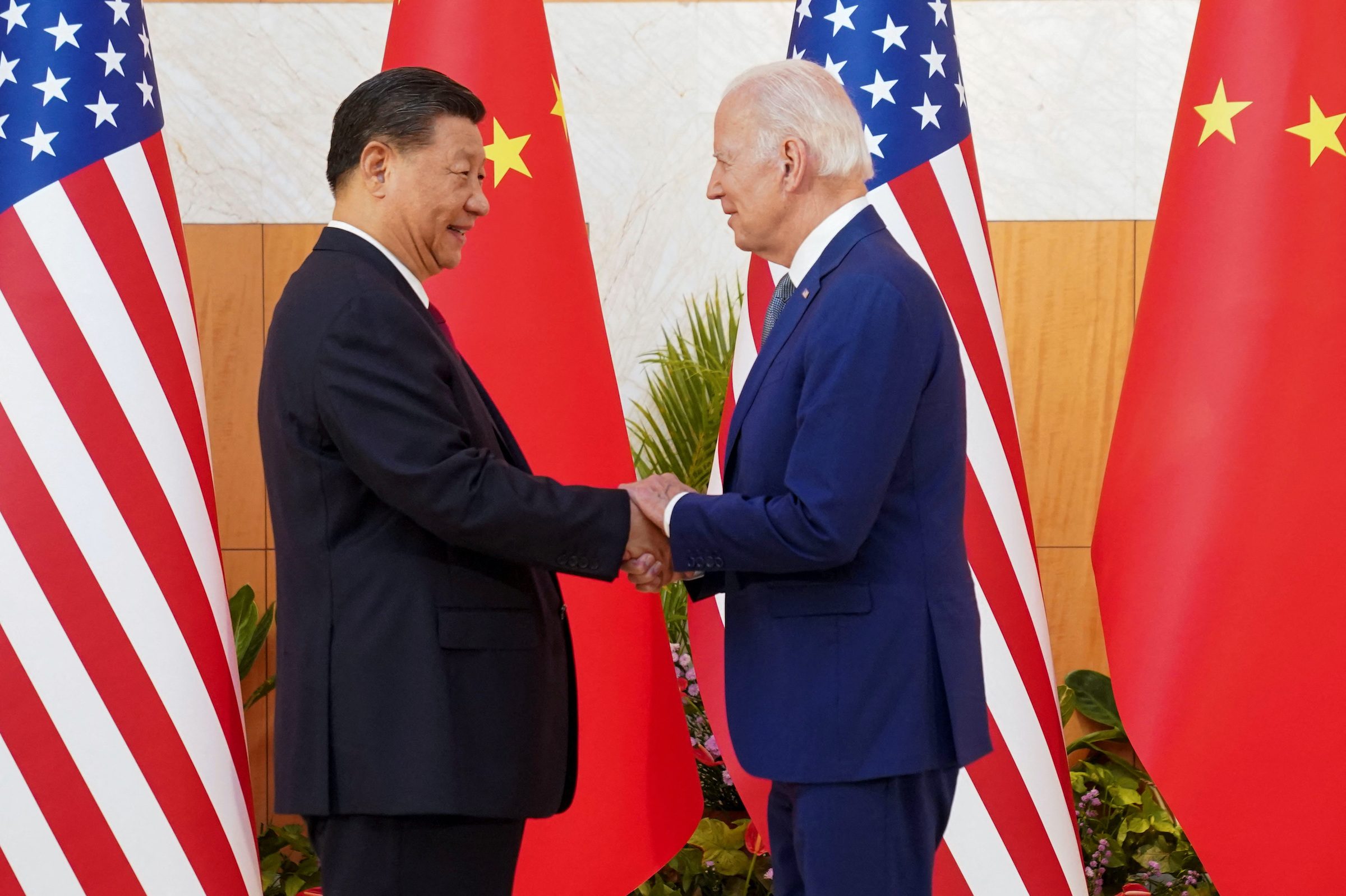 BILATERAL MEETING. US President Joe Biden shakes hands with Chinese President Xi Jinping as they meet on the sidelines of the G20 leaders' summit in Bali, Indonesia, November 14, 2022.

Facebook Twitter Copy URL
Copied
The Biden-Xi meeting sends 'a very significant message to the world that international cooperation is important for all of us,' says International Monetary Fund Managing Director Kristalina Georgieva

The leaders of top economies issued a “strong call” for an end to Russia’s war in Ukraine, in part because the conflict is the single biggest factor slowing global growth, Georgieva told Reuters as a contentious G20 summit ended.

But the Biden-Xi meeting sent “a very significant message to the world that international cooperation is important for all of us,” Georgieva said.

She noted that the IMF has warned that growth would suffer if the world fragments into geopolitical blocs led by the United States and Western allies on one side and China and other state-driven economies on the other, with competing technology and other standards. This would reduce global gross domestic product output by $1.4 trillion to $3.5 trillion, the Fund estimates.

“Just imagine what the world can do with this kind of money,” Georgieva said.

US tariffs imposed by former president Donald Trump in 2018 on hundreds of billions of dollars’ worth of Chinese goods have largely been borne by American consumers and companies. In October 2019, the IMF blamed the US-China trade war for cutting global growth to the slowest pace for a decade.

“And at a time of high inflation, this is least desirable,” Georgieva said of tariffs. “Also, China recognizes that there has to be a reliance on mutual cooperation because we see the Chinese economy being in a very tough spot.”

The G20 leaders expressed concern about a deteriorating debt situation in some middle income countries, a statement that was “a recognition that more needs to be done,” Georgieva said, adding that defining these steps was difficult.

The IMF has called for more predictability in the restructuring process, for countries who seek help under the G20’s common debt restructuring framework to be allowed to suspend servicing of their debts, and to include vulnerable middle-income countries like Sri Lanka.

Georgieva said she was pleased to see language in the G20 leaders’ joint declaration calling for central banks to calibrate the pace of their interest rate hikes to avoid spillovers to other countries. This was because inflation had shot up in many emerging market economies due to the dollar’s massive strength.

Asked whether she saw evidence of US inflation subsiding given recent data showing decreased price pressures, she said that was “possible,” but more data was needed to establish a trend.

Still, indicators are showing a “gloomier” path for the world economy, “meaning it is slowing down and at that point, the Fed can reassess” as demand cools, she said. – Rappler.com