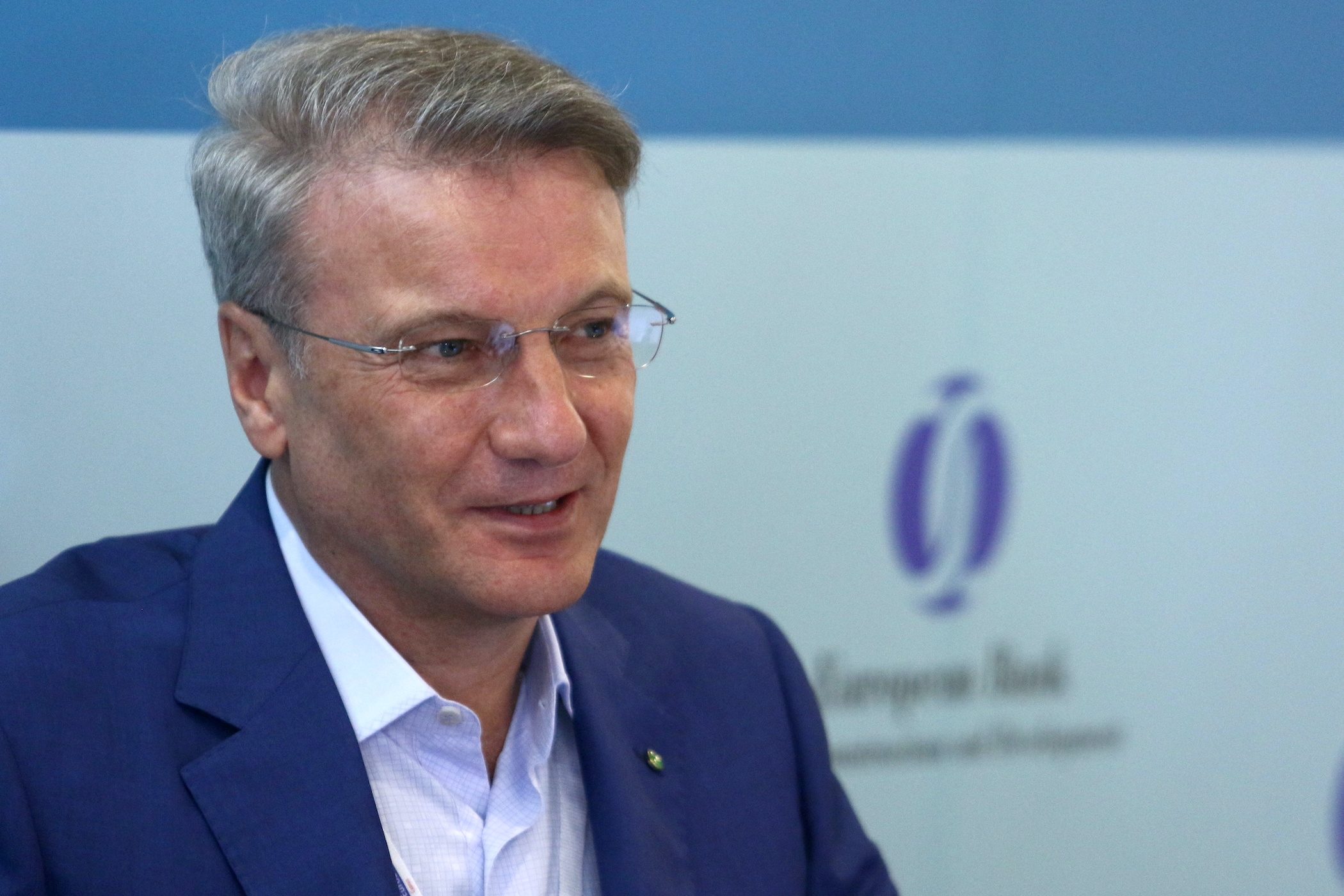 SBERBANK. Sberbank CEO Herman Gref addresses an audience during the Annual Meeting and Business Forum of the European Bank for Reconstruction and Development in Nicosia, Cyprus, May 11,2017.

Facebook Twitter Copy URL
Copied
Herman Gref, the head of Russia's largest lender Sberbank, is included in the latest round of US sanctions

The United States and its allies on Thursday, March 24, ramped up pressure on Moscow over its invasion of Ukraine, as Washington imposed fresh sanctions on dozens of Russian defense companies, hundreds of members of its parliament, and the chief executive of the country’s largest bank.

The US Treasury Department also issued guidance on its website warning that gold-related transactions involving Russia may be sanctionable by US authorities, a move aimed at stopping Russia from evading existing sanctions.

“Our purpose here is to methodically remove the benefits and privileges Russia once enjoyed as a participant in the international economic order,” a senior administration official said, speaking on condition they not be named.

The United States and its allies have imposed several rounds of sanctions, including targeting the country’s largest lenders and President Vladimir Putin, since Russian forces invaded Ukraine a month ago in the biggest assault on a European state since World War II.

Moscow calls the assault a “special operation” to disarm and “de-Nazify” its neighbor.

Among the new sanctions targets are more than 40 defense companies, including state-owned Tactical Missiles Corporation and 28 firms to which it is linked, as well as its general director, the Treasury said in a statement.

The Treasury said Washington’s action aligned with similar measures taken by the European Union, the United Kingdom, and Canada.

The Treasury said the conglomerate, which Britain has already hit with sanctions, produces naval systems and weapons that Russia is using against Ukraine, including the Kh-31, a high-speed airborne guided missile that has been employed extensively in Moscow’s offensive.

Other firms on the new list include manufacturers of ammunition for the Russian military, civilian and military helicopters, and drones that the Treasury said originally were designed for surveillance but have been “repurposed” and used to attack Ukrainian forces.

The Treasury also slapped sanctions on 328 members of the Duma, Russia’s parliament, and Herman Gref, the head of Russia’s largest lender Sberbank, who the Treasury said was a close Putin associate.

The United States said last month that US banks must sever their correspondent banking ties – which allow banks to make payments between one another and move money around the globe – with Sberbank, but did not freeze its assets.

The United States on Thursday also targeted 17 board members of Sovcombank, which is also under US sanctions, and Gennady Timchenko, a longtime ally of Putin, his companies, and family members.

The official said the United States warned Putin that it would face swift and severe consequences if he invaded Ukraine and they have delivered on that threat. The official noted that the country is facing punishing inflation and economic pain that will push it out of the world’s top 20 economies.

“Russia will soon face an acute shortage of ideas, talent, and technology to compete in the 21st century, and Putin will be left with a strategic failure of his own making,” the official said.

US national security adviser Jake Sullivan said earlier this week the United States would consult with allies about Russia’s inclusion in the G20 group of the world’s largest economies.

The sanctions and their economic consequences could make that discussion easier by effectively making Moscow ineligible because of its shrinking economy. – Rappler.com