Sexy highlights from a night of ‘Deus Sex Machina’ 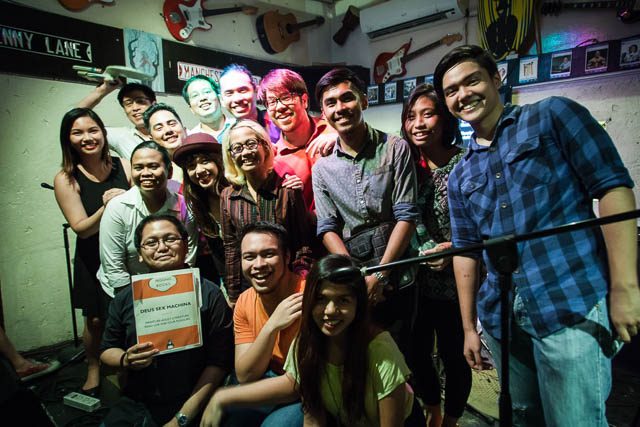 What is it? It’s a loose alliance of creative Filipino writers, who freely admit they think about sex a lot, and are happy to write and talk about it. Their writing manifests in many forms: monologues, dialogues, interactive games, historical correspondence. And they explore a wide range of topics, from Victorian erotica to rebound sex, from imagined Pokemon adventures to Holodeck fantasies. Whatever they write, they’re happy to share their creations with a consenting adult audience, as they did at their fourth show at Route 196, Katipunan Ave., on May 27.

It seems most of the writers aim to induce some discomfort and uncontrollable laughter in the audience, and in that they’re wildly successful. But they may not realize they’ve achieved something else: they’ve made it okay to talk – and laugh – about sex.

In this country, rates of teenage pregnancy are rising, the thought of Grade 5 students being taught sexuality education makes both parents and teachers cringe, and HIV infections are increasing. But if you can show that it’s okay to talk about sex, laugh about sex, and ask questions about sex, then that may go a long way in the conversation about sex.

Here are some lessons you might learn in one night of DSM.

You don’t want to think about it. But your parents had sex. In Disney movies, the princess falls in love with the prince, and in the DVD release of the sequel, they have a baby.

In “A Sexier History of Time,” Timothy Dimacali explored the sex life of renowned physicist and author Stephen Hawking.

But he’s in a wheelchair, you protest. Ah yes, but he’s been married twice and has three kids. Of course he has sex. And his pillow talk may be littered with puns about large Hadron colliders and black holes.

How do you learn about sex?

It’s okay to explore your fantasies.

In the course of thinking about sex, it is inevitable that you start imagining sexual situations and partners. This is perfectly normal. Captain Jean-Luc Picard of the USS Enterprise used the Holodeck for that precise purpose, according to Kenneth Keng’s “Not Too Soon: The Search for Spunk.” Keng proposed that the eminent captain harbors secret feelings for another captain: James Kirk of the Star Trek Original Series. With co-readers Figuracion and JR Santos as the captains, Keng used phrases from the shows and movies as rather graphic metaphors to illustrate exactly what Kirk would like to do to Picard.

In Aya Tantiangco’s “Ang Mga Pagsubo ni Darna,” read by Karen Mae De Vera, Narda helped Ding figure out his sexuality by inviting Darna’s serpentine enemies over for a night of experimentation. Also, she revealed that Valentina was a masochist, deliberately prolonging fights with Darna by way of monologues and posturing.

Research and experience are important.

Whatever your age or sexual experience, you probably still have questions about sex. There are things you want advice on. In the opening act, “Performance Anxiety Workshop,” Dustin Celestino regaled the audience with his journey towards becoming a “champion of sex,” through “years of hard work and determination.” He talked about drawing inspiration from the film Rudy, seeing parallels between the title character’s football career and the growth of his own sex life, and pushing himself to “just get in there!”

During the intermission, JR Santos moderated a game called “Cosmo or DSM,” written by Aya Tantiangco. Two volunteers from the audience read pieces of sex advice projected on-screen, and decided whether it came from the popular women’s magazine, or the DSM writers.

Often it was difficult to figure out whether the advice was trying to injure or confuse. For example, “Push an exercise ball up against the wall, have him sit on it, bounce on him” (from the magazine). Or this gem, “Rock his world by shaking it up while you’re on top. Do a circular motion first, followed by a rocking one, then try a little zigzag.  Bounce up and down, then turn around and twerk, twerk, twerk!” from DSM. So part of the lesson was in figuring out which information was credible and accurate! There are so many ways to have sex.

In Keng’s ode to Star Trek and Dimacali’s account of Hawking’s sex life, you see that even the great and powerful have sexual urges. And in all the performances, you cringe about the challenges of dealing with sexual desire while laughing at the misadventures of fictional characters.

If you can get used to the idea of animated character and our childhood heroes and heroines having sex, having trouble having sex, and the like, then maybe it will be easier to talk about sex in the real world. So treat yourself to a different brand of sexuality education at Deus Sex Machina. Their next show is scheduled for July 22 at Route 196. Check out their Facebook page for updates. – Rappler.com