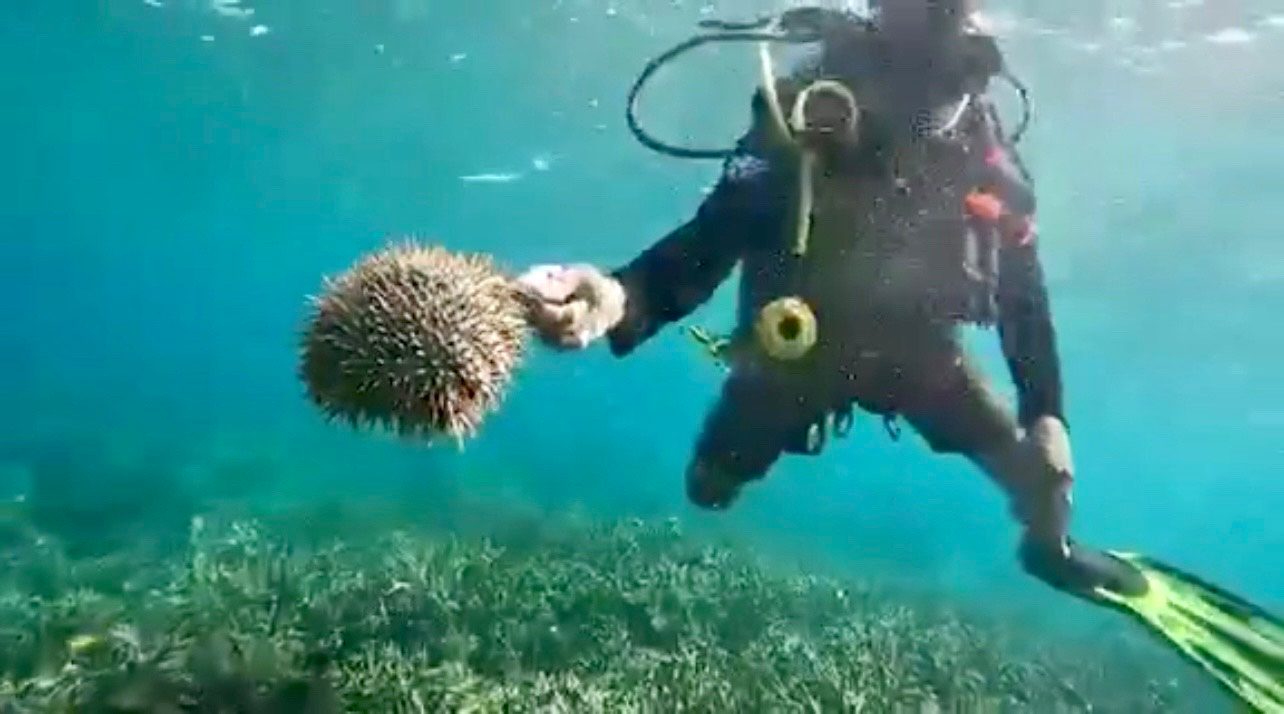 DANGEROUS HARVEST. A diver collects a venomous, coral-eating Crown of Thorn starfish, off the coast of Boracay island on June 14.

AKLAN, Philippines – In waters off the world-famous tourist island of Boracay, teams of divers have started their painstaking, dangerous campaign to rid coral reefs and the seabed of the large, venomous crown-of-thorns starfish (COTS), the  scourge of hard corals. 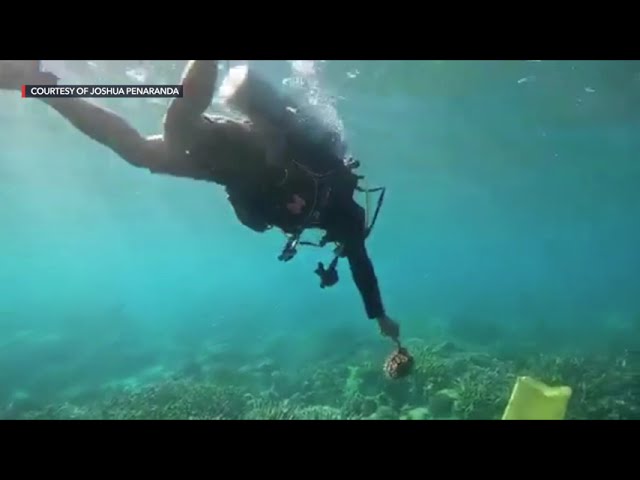 The effort, Vargas said in an interview on Wednesday, June 15, is to stave off an “outbreak,” which the Bureau of Fisheries and Aquatic Resources (BFAR) calls when more than 20 of these starfish are found for every seabed hectare.

Tinig Reef is half a hectare. The natural density for COTS, a natural resident of coral reefs, is from six to 20 per hectare in a coral reef.

But marine environmentalists are not waiting for an outbreak declaration as an infestation could mean COTS gobbling up enough coral expanse that a reef may not recover.

In normal numbers, they can eat away 10 square meters of coral yearly, still allowing regeneration.

Manual collection is the best way of preventing a COTS outbreak, said Vargas.

“We do this in order to ensure that the environment is not harmed,” he told Rappler.

Another popular method is injecting vinegar into the COTS.

Only trained divers can perform these tasks.

Numerous spines jut out from the COTS body wall, which features a central disk and from seven to almost two dozen arms. COTS thorns can cause severe pain and swelling in divers that come in contact with the creatures. Some persons have required surgery to take out spines that get embedded in tissue or muscle.

COTS can grow up to 14 inches in diameter. While its spines present a stiff appearance, its body is pliable, bending to the shape of corals.

In a video shared by diver Joshua Penaranda, a diver-scout makes sounds and points to COTS wedged between still-healthy corals and a stony lump it has stripped bare of life.

The diver-collector holding a long, three-pronged thong approaches the spiky COTS, which is twice the width of his hand.

He slowly balances on the tip of the bare rock and, with a gloved hand, picks up the starfish. He holds it away from him and swims a few meters to deposit his find in a yellow sack.

Rough harvesting could destroy corals not yet devastated by COTS presence, Vargas pointed out.

COTS also protects itself in a unique way. Agitating the starfish without immediate removal causes it to release between 100 to 1,000 eggs that would unleash a new nightmare in a few years.

The presence of COTS gives rise many other concerns, says the BFAR.

In 2021, when Culasi town in Antique declared an infestation, BFAR Western Visayas chief Remia Aparri said, “when there are no more corals, there will no longer be a habitat for our fish.”

Reefs are breeding ground for fish. When they are destroyed, food security is threatened because of dwindling catch.

The June 14 harvesting teams included volunteers from the Boracay Association of Scuba Schools (BASS), Malay MDRRMO,  the Philippine Coast Guard-Caticlan and the local government of Malay.

The Boracay collection is the second in Aklan for the year.

On May 5, 2022, personnel from the Department of Environment and Natural Resources Office-Western Visayas also manually collected hundreds of COTS sprawled across 300 hectares of seabed off Barangay Jawili in Tangalan town.

There is no clear, single cause for COTS infestation. Among the reasons cited are warmer waters due to climate change and high ocean acidification.

In the case of Culasi, Dr. Jon Altamirano from the Southeast Asian Fisheries Development Center/Aquaculture Department (SEAFDEC/AQD) based in Tigbauan, Iloilo, told the Philippine News Agency that the outbreak could have been caused by the “probable abundance of food, not for the adults (COTS), but for the planktonic larvae even before they settled in Culasi.” – Rappler.com

Aklan, Angeles City voters use ballpoint pens instead of marking pens to vote

From party island to family destination: Boracay’s back, but a bit different