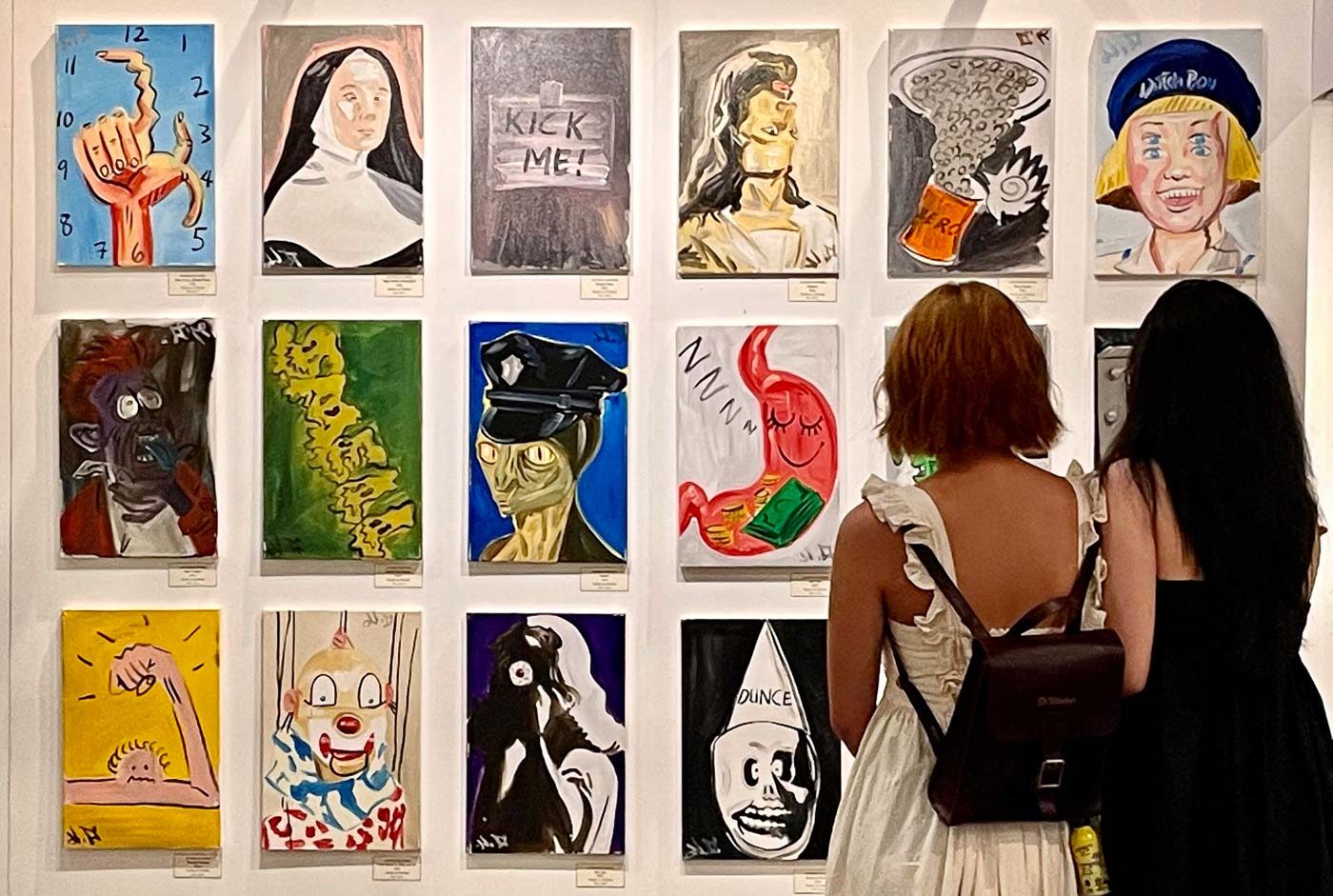 GOING STRONG. On its second year, the Visayas Art Fair has attracted double the number of galleries from its first year.

Facebook Twitter Copy URL
Copied
The maze of exhibitions by participating galleries and artists showcase various facets of Visayan culture, and highlight the talents of both individuals and groups

CEBU, Philippines – In its second year, the Visayas Art Fair (VAF) has ceded space for more local artists in the region.

The number of participating galleries has grown from 26 in its first year to 33. More than 500 artists from different parts of the Visayas were featured in the fair, held on the 12 floor of IT Center 3 at Oakridge Business Park, Mandaue City.

VAF was organized in 2021 to expand the national art scene to incorporate Visayan artists, who would normally find it difficult to get access to Manila’s art stage.

“[Art is] where Filipinos can express their identity in their own terms. In our history of colonialism, we are speaking with the international tongue. With art, we can speak for ourselves. Filipinos can say this is who where are, truly see themselves and know that to make themselves within the context of their own culture,” 21-year-old artist Jheanne said.

The maze of exhibitions by participating galleries and artists showcased various facets of Visayan culture, and highlighted the talents of both individuals and groups. 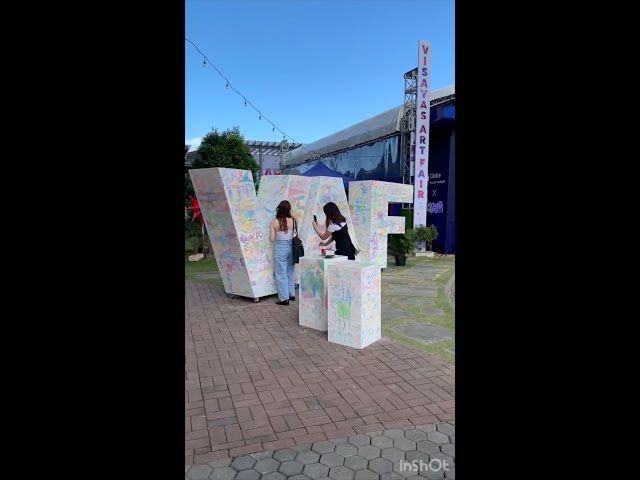 Young artists Jheanne and 20-year-old Julia Borja worked hard to be able to get a makeshift space in last year’s fair. They were surprised to learn about the number of inquiries their works attracted, one of which led to their first official exhibition in Manila.

“People ended up really liking it. Someone from Mabini in Manila saw it, and I guess they liked it enough to ask us to be in a show with them in Manila with a bunch of other artists, and that was our first time [officially] exhibiting work,” Jheane said.

At this year’s VAF, Jheane and Julia’s works are featured under “By No Means,” an exhibition curated especially for Visayan women artists.

“This is exactly what we were hoping for but were too scared to branch out or ask,” Jheanne said.

“We thought we didn’t have a big enough name to be, I guess, worthy of being a part of this,” Julia added.

Artists like Jheane and Julia, women making their debut in the industry relatively young, are significantly underrepresented in the local art scene, and more so on the national level.

“Big ideas, important ideas are usually attributed to men. And when it’s by a woman, it’s an anomaly. Cause there’s so little of us that it’s like, ‘Oh wow, a woman who can think great. She’s special.’ Rather than, ‘Women have not had the platform to express their views for so long. So I think it’s important not just so women could see themselves, but to tell the woman, hey, you can speak and to shift the power dynamic,'” Jheane said.

For Julia, opening up the art scene to more diverse voices would also expedite welcome improvements to Filipino art.

“That also makes space for a lot more improvement [in] art creation. There will be faster development when you showcase it and more and more people are seeing it and experiencing it. I guess it will bleed into more creativity,” Julia said.

The second year of VAF also came with new elements such as the launch of design caravan Bodega. Bodega carries 12 design companies, 10 of which are from the Visayas while two are from the National Capital Region. Located at Oakridge Pavilion, the caravan showcases locally made accessories, interior decor, and jewelry.

Kae Batiquin, manager for the HoliCOW coalition, shared that each participating brand was invited because they told a story. For HoliCOW, their story was about bringing forward the Cebuano brand of interior design while putting a premium on sustainability in the manufacturing process.

“We condensed our philosophy into three words, which has become our company value and what we go back to whenever we make a big decision in terms of systems-making and products-making. That’s sustainability, authenticity, and community-slash-identity,” Batiquin said.

HoliCOW as a coalition was formed over a decade ago, as a response to the declining demand for local furniture and decor pieces. According to Batiquin, HoliCOW was created not only to reserve a place for local designers in the market, but also to avoid the displacement of families whose sources of income were deeply rooted in the industry.

Apart from promoting local craftsmanship, Batiquin says that HoliCOW helps push the movement for sustainability within the art and design industry.

“We put a premium on on sustainability because we work with natural materials. The world is going to shit and people keep blaming the consumers for it,” Batiquin said in a mix of English and Visayan.

Batiquin stressed the need for players in the design industry to provide consumers with more sustainable options. Consumers are not fully to blame for environmental degradation because most of the accessible products in the market were not designed to be sustainable in the first place, she pointed out.

“If you want to talk about sustainability, you have to attack it from stage one, which is design,” she added.

HoliCOW pushes its advocacy by requiring partner companies and designers to shift to a more sustainable and waste-free creation process one product at a time.

Slave to the arts

For artist and curator Alyssa “Hennessy” Selanova, one of the organizers of VAF, the event not only serves as a platform to showcase local creativity but also to link artists and creatives from the Visayas islands together.

“As a cultural worker, a slave of the art, it fulfills me to see communities, galleries, and artists come as one to celebrate the power of art. I’m grateful that once again, I have the chance to lead the operations of VAF and connect different galleries, artists, partners, and friends,” she said.

Selanova, along with Jay Nathan Jore, Sayoka Takemura, and Philip Sinajonon, co-authored the book Bantugang Sugbuanon: The Art and Artists of Cebu. The book was published as part of the Cultural Heritage Series of the Foreign Service Institute of the Department of Foreign Affairs.

True to their mutual pursuit of giving voice to the Visayan artist, the book was launched on November 25, on the second day of VAF.

“The book is all about the art and art scene of Cebu. It’s important that it was launched and be part of the VAF because most if not all the artists included in the book are participating in the fair. VAF is also known as an annual event that gathers artists around Visayas and NCR. And it is the most relevant time or event,” Selanova said.

The VAF is set to run until November 27. Tickets can be preordered from the VAF Facebook page, or bought at the actual venue.  – Rappler.com