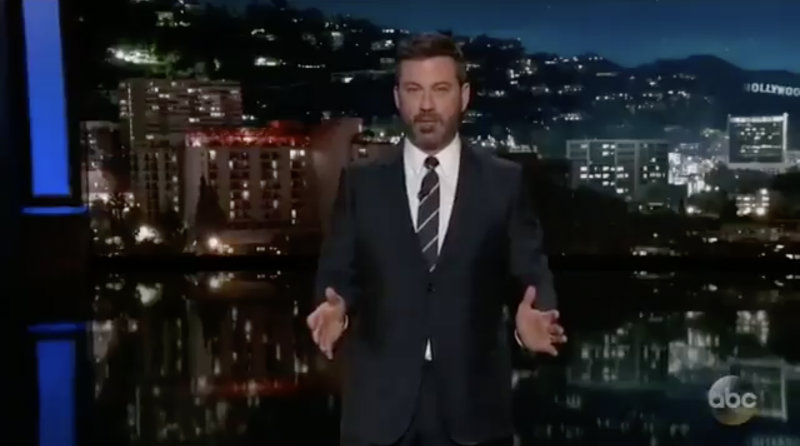 MANILA, Philippines – American late-night talk show host Jimmy Kimmel took notice of the effigy of US President Donald Trump that was set on fire by protesters during the Association of Southeast Asian Nations (ASEAN) Summit in Manila on November 13.

In a recent episode of Jimmy Kimmel Live!, the popular TV host  said that the US President received an “exceptionally warm welcome” from Filipinos, before showing clips from the protests in Manila. (IN PHOTOS: At least 2,000 attend protests on day one of ASEAN Summit)

“Comparatively, our protests here suck. I mean, where did they get that giant Trump fidget spinner? That’s amazing!” Kimmel said. (READ: Why groups are protesting Trump’s PH visit)

This 13-ft effigy of US President @realDonaldTrump features him with 4 arms shaped into a swastika symbol. #ASEAN2017 pic.twitter.com/CKmuL48XTO

Created by the Filipino artist group Ugat Lahi, the effigy featured Trump with 4 arms resembling the Nazi swastika, a symbol of auhoritarian rule, hatred, and anti-Semitism. Trump has long had a following among white supremacist groups attracted to his nationalist rhetoric on immigration and other hot-button issues.

Behind Trump’s legs, a caricature of Philippine President Rodrigo Duterte can be seen crouching.

“He encourages the police to kill people who use drugs. No trials. They just kill people. Of course, he and Donald get along,” Kimmel said.

Duterte’s violent anti-illegal drugs campaign has drawn criticism from both local and international communities. Latest “official” data from the Philippine National Police (PNP) shows that at least 3,850 people have been killed in police operations, while at least 2,290 others were killed mostly by unknown vigilantes.


The protesters burned the effigy as they marked the fifth day of their protests during the ASEAN Summit. (READ: Violence marks the ASEAN 2017 protests in Manila)


Other foreign netizens were also amused by the Filipino-made effigy. Below were some of the tweets they posted after seeing the Manila protests:

That….is creative. Filipinos got this protest thing down. Wow.

Amazing. This is better than anything I've seen Made in USA by us in the resistance!

Now that is art and the truth.

THAT is the most beautiful anti drump effigy I’ve ever seen! Bravo #aseansummit2017 protesters!

What can you say about the the effigy? Share your thoughts on X! – Rappler.com