Duterte to De Lima: I will investigate you for shabu in Bilibid

May 26, 2016 3:00 PM PHT
Pia Ranada
Facebook Twitter Copy URL
Copied
'I will file charges against you. Do not pick a fight with me, you will lose,' president-elect Duterte tells incoming senator Leila De Lima 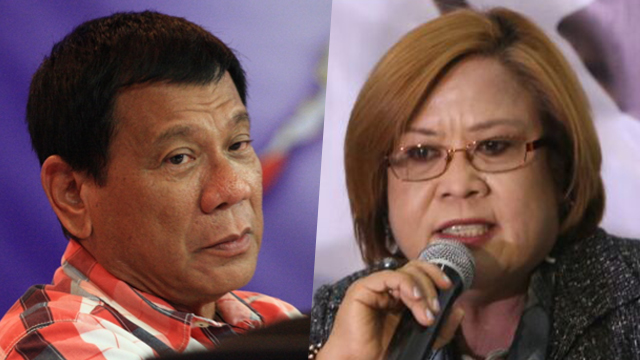 DAVAO CITY, Philippines – President-elect Rodrigo Duterte warned senator-elect Leila De Lima that she’s not off the hook for her supposed slowness in cracking down on shabu laboratories inside the national penitentiary.

“De Lima, tumahimik ka (you be quiet)! I will investigate you. I will file charges against you. Do not pick a fight with me, you will lose,” he said during a press conference on Wednesday night, May 25.

Duterte claims that he had told De Lima about the existence of shabu (methamphetamine hydrochloride) inside the New Bilibid Prison.

“It took her 7 months to enter the premises,” he said.

The president-elect said he “will dig deep” into why De Lima seemed to tarry in cracking down on the shabu laboratories and the lavish lifestyles high-profile criminals were enjoying inside the jail. (READ: Why anomalies happen in Bilibid)

‘Hoy, hija. Huwag mo masyadong pakialaman ‘yung bunganga ko (Woman, don’t interfere with what comes out of my mouth). You better look in your own backyard because you have a very serious problem there,” he said.

Duterte and De Lima have been engaged in a word war even before the 2016 elections. In 2014, she had expressed outrage at Duterte’s statements that he was ready to kill the alleged smuggler Davidson Bangayan.

During her watch, the Department of Justice launched an investigation into Duterte’s alleged involvement in Davao death squad.

The DOJ stopped the probe due to the unwillingness of the sole witness to participate after Duterte won in the  presidential elections.

De Lima has also expressed concern over Duterte’s plan to bury the late dictator Ferdinand Marcos Sr in the Heroes’ Cemetery and his 3 to 6-month anti-crime promise. – Rappler.com