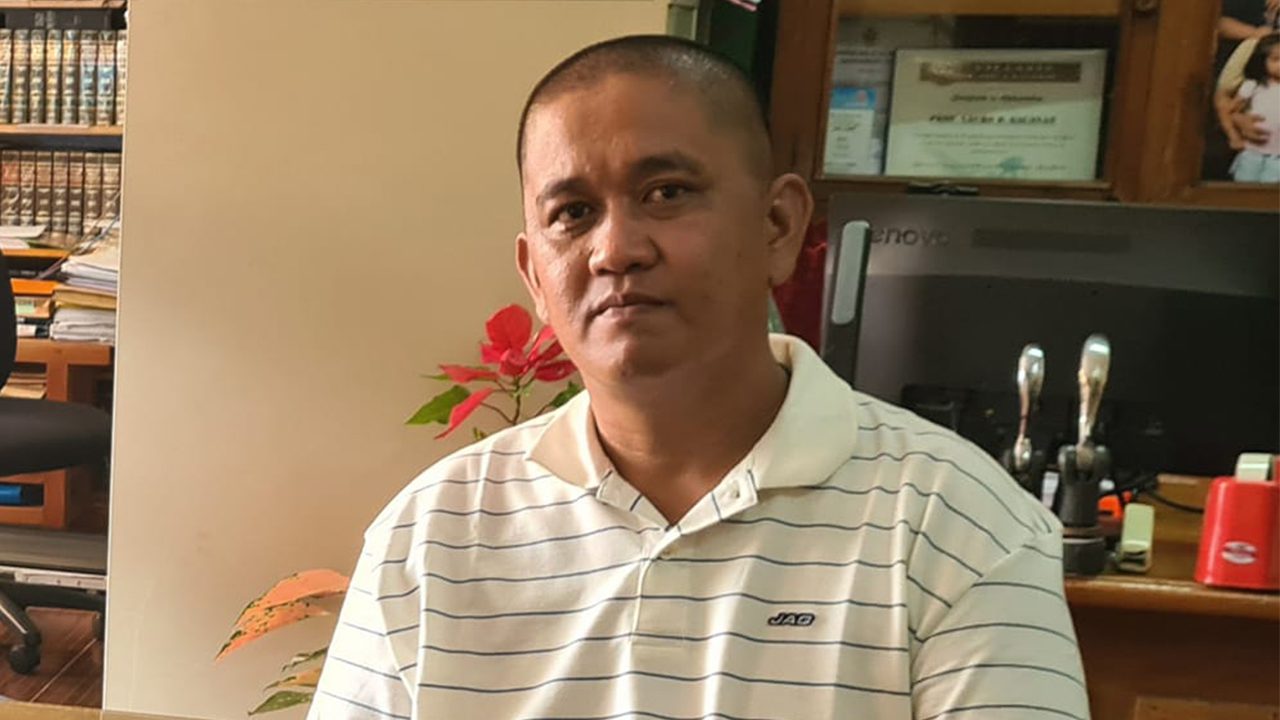 ALIVE. Bureau of Corrections superintendent Ricardo Zulueta poses for a photo inside his legal counsel's office in Baguio City on December 13.

MANILA, Philippines – Bureau of Corrections (BuCor) superintendent Ricardo Zulueta was still a no-show during the continuation of the preliminary investigation into the death of hard-hitting broadcaster Percival “Percy Lapid” Mabasa.

“However, there is no show for respondents Zulueta and Dimaculangan brothers. Right now, we just received the motion for reconsideration the order issued by the panel denying motion for inhibition of DG (Director General) Bantag,” Senior Assistant State Prosecutor Charlie Guhit told reporters on Tuesday, January 24, detailing which respondents attended the preliminary probe.

Zulueta and suspended BuCor chief Gerald Bantag both face complaints for the killings of Lapid and Jun Villamor. The latter was believed to be the middleman who contacted people to kill the broadcaster. Meanwhile, Dimaculangan brothers, Israel and Edmon, are among the named suspects in Lapid’s slay.

Zulueta and other respondents have yet to appear before the Department of Justice (DOJ), have also yet to submit their counter-affidavits as response to the complaints thrown at them. Bantag has also yet to submit his counter-affidavit, but he has appeared once before the justice department. Meanwhile, his legal counsels regularly attend the probe.

According to Guhit the complaints will not yet be submitted for resolution because the hearing is still ongoing.

“I can only say that under the rules no submission of a counter-affidavit, we can take it as if they are submitting the case for resolution.”

After months of being under the radar, Zulueta finally appeared before the public in December last year. He was implicated in the Lapid and Villamor cases as early as November 2022. Through his lawyer, Zulueta said he was not in hiding and is ready to rebut allegations against him.

Roy Mabasa, Lapid’s younger brother, said the worst-case scenario they expected was Bantag will file another motion in relation to the complaints he faces: “‘Yon ‘yong mga worst scenario na ine-expect natin, motions after motions. But at the end of the day, kailangan talagang sumunod siya sa proseso.”

(That’s the worst-case scenario we expect, motions after motions. But at the end of the day, he really needs to follow the process.)

On December 5, during the earlier days of preliminary investigation into the Lapid case, Bantag filed a motion for inhibition, which asked the prosecutors to distance from the case. He filed the motion instead of filing his counter-affidavit. Last week, on January 19, the DOJ denied Bantag’s motion.

During the preliminary investigation on Tuesday, Bantag’s camp filed a motion for reconsideration in relation to the complaints.

“Yes, we filed a motion for reconsideration. First, because that is in accordance with the rules, and second on the ground that we filed a similar case – a murder case before the Ombudsman that is against the honorable secretary and the other correspondents,” Rocky Thomas Balisong, one of Bantag’s counsels said.

Meanwhile, the status hearing for the complaints against Bantag and his companions is scheduled on January 31, at 2 pm.