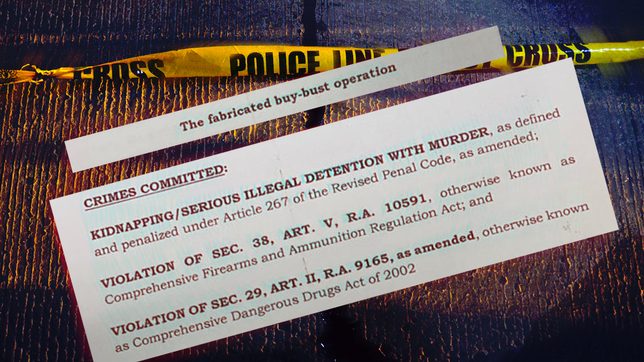 Philippine prosecutors have filed murder and arbitrary detention charges against seven Bulacan cops who detained and killed six passersby in February 2020, and falsely claimed that they were drug suspects who resisted arrest or nanlaban.

“The criminal informations were filed at the Regional Trial Court, Malolos City, on 25 August 2021. The Department of Justice (DOJ) Panel is awaiting the court’s issuance of warrants of arrest against said police officers,” the DOJ said in a statement on Tuesday, August 31.

Six counts of arbitrary detention and six counts of murder were filed against the following officers of the Intelligence Section/Drug Enforcement Unit of the San Jose del Monte, Bulacan police station:

Police Major Leo dela Rosa, the drug enforcement chief, who was included in the complaint filed by the National Bureau of Investigation (NBI) was not charged. The DOJ said there was insufficient evidence against Dela Rosa and others named in the NBI complaint.

In Bulacan, police ‘kidnap’ passersby then kill them in fake ‘nanlaban’ case – NBI 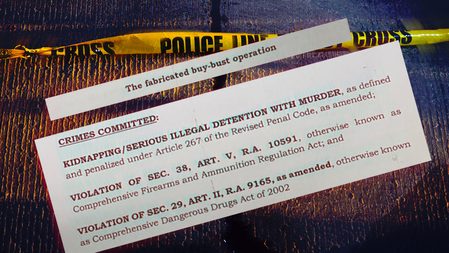 The charges were filed in court only on August 25 because “there were further discussions and evaluation between the panel and the task force head,” said DOJ spokesperson Undersecretary Emmeline Aglipay Villar.

The registry of the International Criminal Court (ICC) released a report on August 27 showing that the victims of President Rodrigo Duterte’s drug war “overwhelmingly support” the opening of an investigation. Some of the reasons cited in the report is the lack of a genuine local mechanism for justice at home.

The DOJ, however, is stonewalling on access to the current dataset of its hyped drug war review panel, which has promised to reinvestigate deaths in police operations, which has reached more than 7,000.

The San Jose del Monte case is one of the more gruesome tales of police abuse in the drug war. According to the NBI, its investigation showed that while the cops conducted a buy-bust operation on a drug suspect on February 13, 2020, they nabbed six men who just happened to pass by the house of the suspect.

The cops detained the passersby in a holding room inside the station, and then later brought them to different sites to kill them. Police presented them later as alleged drug suspects who were killed because they supposedly resisted arrest.

NBI’s witnesses took photos of the six men while detained at the police station, and confirmed that they were the same men killed by pairs on separate nights.

“The eyewitness account of a person who was tasked to watch over the victims while they were being unlawfully detained inside the Intel Room of the IS/CDEU, and photographs depicting the victims, all blindfolded and hand-tied, among others, supported the indictment of the abovenamed police officers,” said the DOJ.