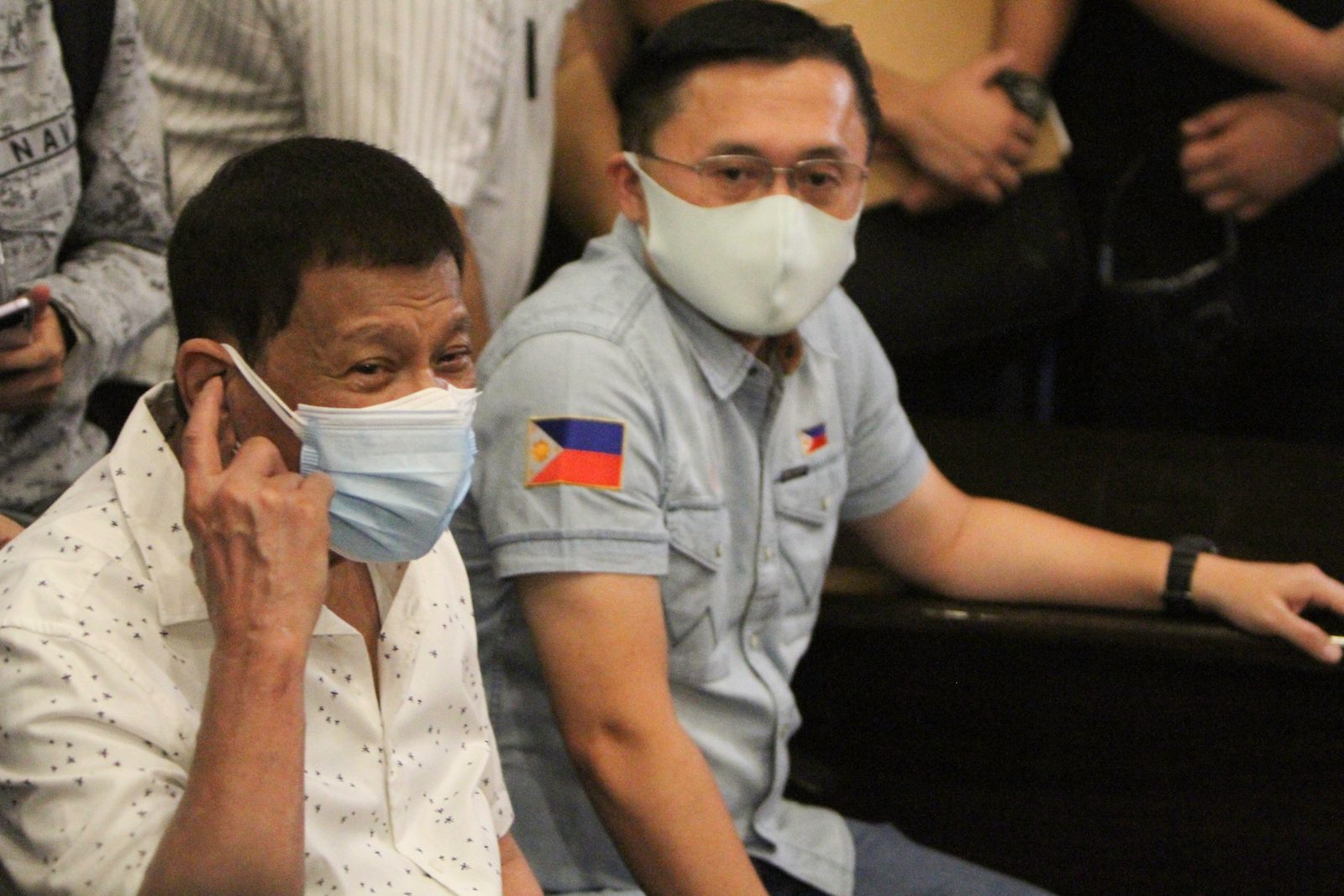 President Rodrigo Duterte accompanies Senators Bong Go and Dela Rosa who withdrew their respective COC’s on November 13, 2021, at the Comelec office in Manila.

Facebook Twitter Copy URL
Copied
'It's a reality in politics that when one ceases to be the administration party, it will lose members,' says Senator Bong Go

DAVAO ORIENTAL, Philippines – Senator Bong Go said on Thursday, June 2, that he and President Rodrigo Duterte will remain as members of the PDP-Laban despite the anticipated exodus of its members to president-elect Ferdinand “Bongbong” Marcos Jr.’s party.

Marcos launched his successful bid for the presidency as the standard-bearer of the Partido Federal ng Pilipinas (PFP), which he chairs.

“Reality of politics, kapag hindi na administrasyon, unti-unti na talaga mawawala ‘yung miyembro (It’s a reality in politics that when one ceases to be the administration party, it will lose members),” Go told a news conference at the Davao Oriental Provincial Medical Center in Mati City.

Go was in Mati to monitor the implementation of his pet Malasakit program in Davao Oriental, and turn over a check to the hospital.

He said he and Duterte would stick it out with PDP-Laban even when it ceases to be the ruling party when Marcos assumes the presidency by the end of June.

“We will stay with the PDP-Laban,” Go said, noting that he and Duterte won their seats in the national government as members of the party.

Duterte ran for president in 2016 as the PDP-Laban’s substitute candidate, and Go subsequently sought a Senate seat under the same party in 2019.

He said the PDP only had a few lawmakers and local officials when Duterte launched his successful presidential campaign in 2016, and then the party saw its membership grow dramatically as soon as the new administration took over.

(It’s really like that when one becomes the administration party. Today, we expect that PDP members would decide to leave for another party for their political convenience.)

The PDP-Laban is a merger of two parties founded by the late former senators Aquilino “Nene” Pimentel Jr. and slain senator Benigno “Ninoy” Aquino Jr. to fight the Marcos dictatorship.

Despite being the administration party, internal squabbles and a leadership crisis weakened the PDP-Laban that it failed to field a common standard-bearer during the May elections.

One faction of the PDP-Laban under Energy Secretary Alfonso Cusi ended up endorsing the son of the late dictator Ferdinand E. Marcos and his running mate Davao Mayor Sara Duterte, now the vice president-elect.

Dr. Manuel Jaudian, acting secretary-general of the PDP-Laban faction led by Senator Aquilino “Koko” Pimentel III, said Duterte and Go are with the Cusi wing which the Commission on Elections (Comelec) en banc recognized as legitimate.

The Pimentel faction has appealed the Comelec ruling and said it was prepared to bring its case all the way to the Supreme Court.

“If we get a favorable ruling, will Duterte and Go rejoin us? In the meantime, they can stay with the Cusi wing,” said Jaudian.

The Pimentel wing ceased to recognize Duterte as PDP-Laban chairman in 2021. At the same time, it also voted to make Senator Manny Pacquiao the party’s president. – with reports from Herbie Gomez / Rappler.com