Duterte earlier challenged Senator Antonio Trillanes IV to submit an affidavit before the mayor issues a waiver on the secrecy of his bank accounts. On Monday, Trillanes presented an affidavit, but Duterte did not issue a waiver.

Instead, Duterte, through his counsel Salvador Panelo, only requested the Bank of the Philippine Islands for a certification that the mayor’s account never contained the alleged P211 million. (READ: BPI asks for 7 days to disclose Duterte account details – lawyer)

This did not sit well with Poe, who said she is “definitely” disappointed with Duterte’s actions. For her, his dilly-dallying is a sign that the accusations against him are true. (READ: Poe to Duterte: If no secrets, why not release bank history?)

Poe, whose presidential bid is supported by Trillanes, asserted that Duterte’s flip-flopping is dangerous for a leader. She said the mayor, who is running on a platform of change, is employing the same tactics that traditional politicians use.

Unlike the mayor, Poe reiterated she released all documents pertaining to her citizenship and residency at the height of the controversy.

(It’s worrisome to have a leader who would say important statements, like the disclosure, but will backtrack. Let’s think of change, but who can bring about real change? Because these are the acts of old politicians. They know how to find a way around the system.)

The neophyte senator said she is willing to open her bank accounts, including transaction history, to the public.

Duterte earlier said he would only release the balance of his accounts, as he challenged other presidential candidates to release their transaction histories, too.

In fact, Poe said she signed a waiver allowing the Ombudsman to look into her bank accounts “if [Ombudsman] finds just cause.”

(I already signed a waiver. My waiver states that as an advocate of the Freedom of Information [bill], I am supporting this. It should be presented especially during my incumbency as a public servant. If there is just cause and someone can say this is the document and the Ombudsman said it should be opened, then open it.)

The one-page waiver sent to the media was notarized on Monday, already at the height of the controversy against Duterte. 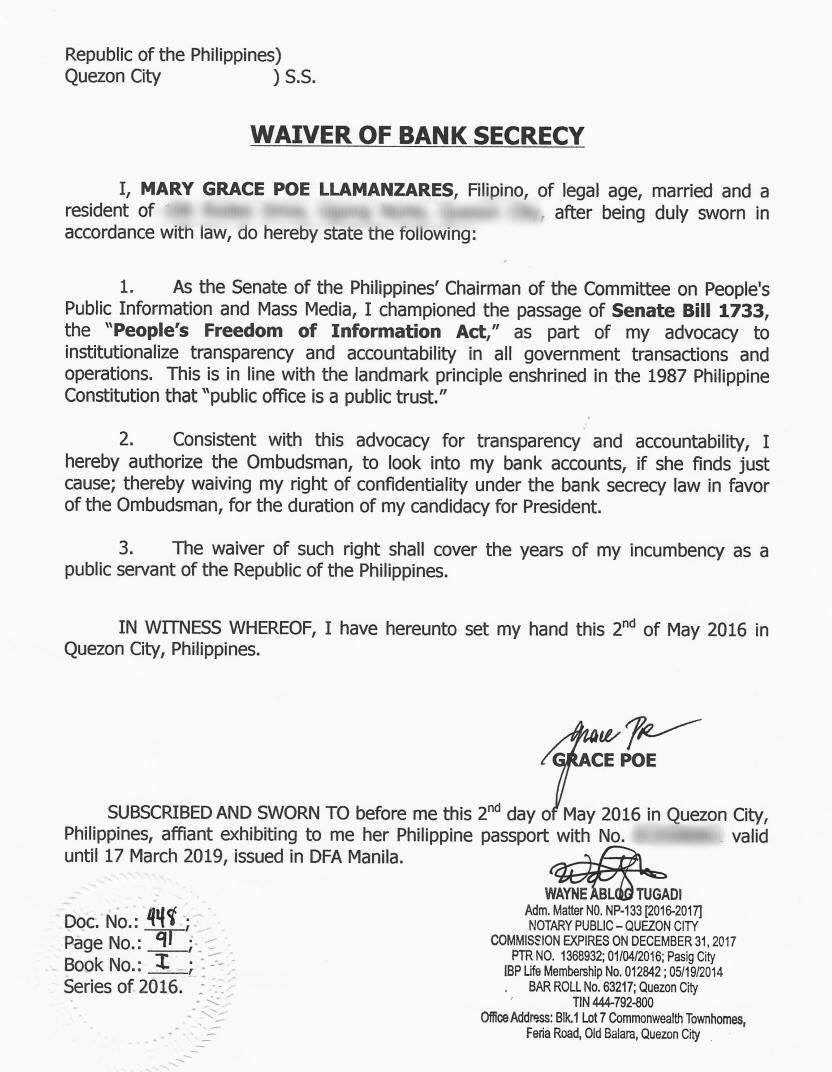 Poe, in the document, said her waiver of her right of confidentiality under the bank secrecy law “will last for the duration of [her] candidacy for president.”

But in the same document, Poe also said the waiver will “cover the years of [her] incumbency as a public servant of the Republic of the Philippines.”

Once the front runner in pre-election surveys, Poe is now trailing Duterte by 11 percentage points. Duterte and his camp earlier alleged that Poe is behind the attacks against him – something that the senator strongly denied. – Rappler.com