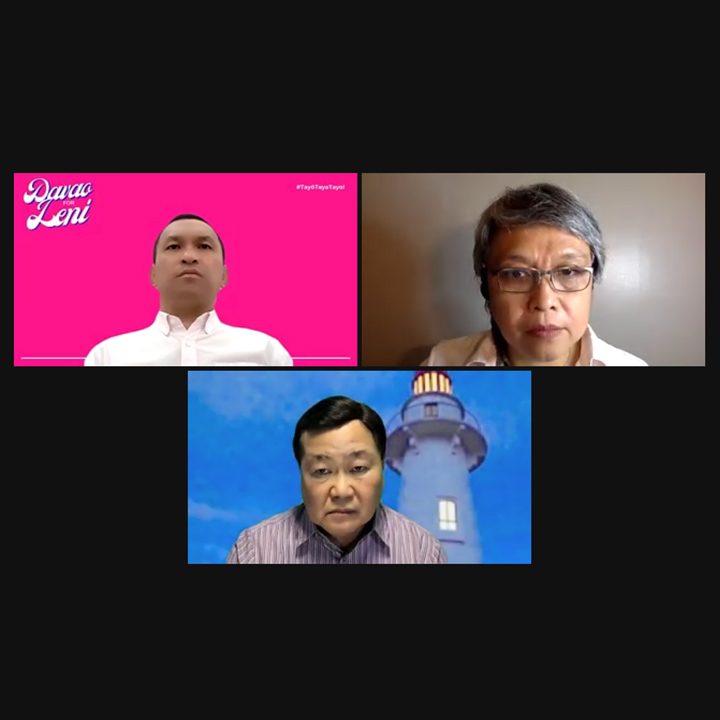 DAVAO FOR LENI PANEL. Lawyer Arvin Dexter Lopoz of Lawyers for Leni in Davao and a candidate for vice mayor in Montevista, Davao de Oro; Mags Maglana who is challenging incumbent Congressman Paulo Duterte for the 1st District of Davao City ;and former justice Antonio Carpio of 1Sambayan speak during the online launch of Davao for Leni.

Facebook Twitter Copy URL
Copied
1Sambayan convenor Antonio Carpio says the 3 major challenges that the opposition coalition must overcome are: potential fraud, the use of taxpayers' money for vote-buying, and digital disinformation

Speaking at the launch of the ‘Davao for Leni’ network, Carpio said the upcoming elections remained an uphill battle for Robredo, who is contesting the presidency, and her running-mate Pangilinan.

Carpio outlined three major challenges that the opposition coalition and their supporters must overcome: potential fraud, the use of taxpayers’ money for vote-buying, and digital disinformation.

In stressing the need for watchers, Carpio noted that all the election paraphernalia, including the ballots and flashcards, will be delivered to Comelec warehouses in Metro Manila by logistics company F2. The company is owned by Dennis Uy, a big financial contributor to the 2016 election campaign of President Duterte.

Each precinct must have at least two poll watchers to ensure there are no missing ballots during deliveries to precincts, Carpio said. They also need to prevent any tampering of flashcards that could lead to the printing of predetermined results and election returns (ERs).

The poll watchers through a smartphone app must take photos of ERs in every precinct and transmit the photos of the ERs to the national coordinating center of 1Sambayan that will tally all the election returns.

Carpio said these three poll watching measures –  verification of number of ballots delivered, ensuring the conduct of the random manual audit, and taking of photos of election returns at the precinct level – will deter and prevent cheating in the elections, safeguard the votes of candidates, and ensure fair, clean and honest elections.

Carpio said public monies could be used to buy votes.

The retired justice was referring to the fund disbursement of the National Task Force to End Local Armed Conflict (NTF-ELCAC), which has a P19-billion budget this year.

The task force, a “civilian entity” under the Office of the President, has been releasing P22M pesos in every barangay cleared of communist insurgency as determined by NTF-ELCAC.

“This really means the President can dole out P20M in pesos to any barangay he chooses. This will debilitate the opposition in the 2022 national elections. The president proposed a P24B pesos budget for the NTF-ELCAC for 2022. Fortunately, the Senate Committee on Finance has cut down the budget for NTF-ELCAC for 2022 to P4B pesos,” said Carpio.

Carpio said the task force should be prohibited from releasing funds 45 days before the elections, similar to the ban on funding for public works and social services.

The President, he added, could also realign savings of the 2021 NTF-ELCAC budget in the remaining months this year.

Aside from the anti-insurgency kitty, Carpio said there were also some hundred billion pesos impounded from the Department of Public Works and Highways (DPWH) through the so-called for later release system or FLR.

“This could be the subject of realignment of the President in the last two months of 2021.”

The COVID-19 pandemic, now entering its 20th month, is going to change the landscape of campaigning, with prohibitions on big physical rallies or house to house visits.

The campaigns will shift from ground events. There will be more spending for TV, radio, and the social media platforms, Carpio said.

He said the third most important obstacle to overcome would be the armies of trolls of the Marcoses and Dutertes. Ferdinand Marcos Jr., the son of the ousted dictator Ferdinand Marcos is running for president. Duterte’s daughter, Sara, the mayor of Davao, is eyeing the vice presidency.

These two political dynasties, Carpio pointed out, have enough cash to hire troll farms equipped with high-tech algorithms. The goal is to paint themselves as saints and saviors and discredit their opponents as the devils and enemies of the people, he added.

“China is helping the Dutertes in this digital battle space as exposed by Facebook itself,” Carpio said. “We have to rely on our digital warriors to counter these armies of trolls.”

Carpio said he had been approached and told that for a certain period of time they can hire troll farms for $2M.

“I said, we can’t even imagine paying it. So, we have to, sariling sikap ito (on our own). We have to train our own digital warriors,” he told the volunteers and supporters of Davao for Leni. – Rappler.com