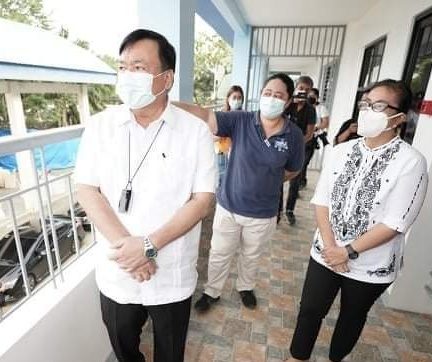 On the evening of Sunday, October 17, Treñas showed his first sign of support to Robredo via Twitter, posting pictures of them during the vice-president’s visit last March with the caption, “Para maganda ang gising nyo bukas.” (So you wake up feeling good.)

He also posted on his official Facebook on Monday, October 18, thanking the vice president for her support to Iloilo City.

The Office of the Vice President had provided Iloilo City with P4.9 million for initial COVID-19 response, and P4.5 million for the Uswag Molecular Laboratory at Brgy. San Pedro in Molo district, which tests swab samples for COVID-19.

“As the father of the city, I must also choose the right leader to guide and lead us – someone who has shown an unyielding courage in the face of adversity, someone who has proven to be effective despite the limited resources, and someone who has no traces of corruption,” the mayor said in his post.

Treñas, however, told Rappler via Viber at the time that he was merely thanking the vice president, calling her a “friend among the presidential candidates.”

He said then that he would wait for the decision of the National Unity Party (NUP) to where he belongs. But on Friday, October 22, the mayor wore a pink shirt for a photo by Gab Umadhay, chief of the city’s LGBT Affairs office.

Rappler again reached out to Treñas, who confirmed his endorsement for Robredo this time with two words: “Yes, definitely”.

Iloilo City delivered one of the biggest turnouts for Robredo, amassing 137,662 votes in the 2016 elections, far from his rival, the deposed dictator’s son, Ferdinand Marcos Jr., who got 33,778 votes. – Rappler.com