Facebook Twitter Copy URL
Copied
In many of the Mindanao cities and provinces where Marcos dominates the presidential race, the votes cast for Leni Robredo and Manny Pacquiao, even if combined, are not enough to dislodge the late dictator's son 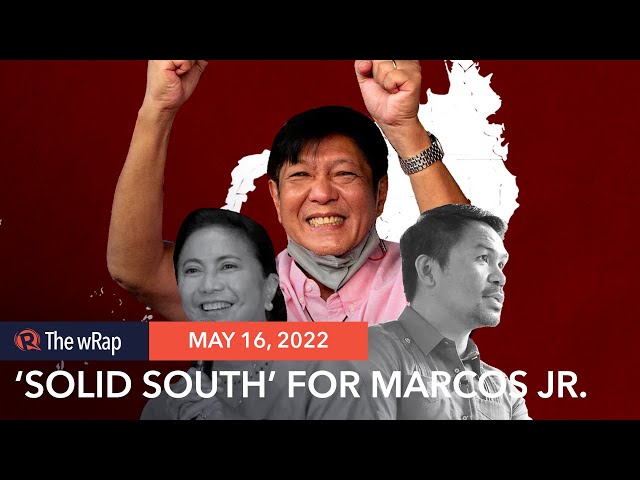 CAGAYAN DE ORO CITY, Philippines – Presumptive president Ferdinand “Bongbong” Marcos Jr. made his rivals look like nuisance candidates in nearly all the cities and provinces in Southern Philippines in the May 9 elections.

Except for one city and two provinces, he is poised to win in all of Mindanao, according to the latest partial and unofficial results from the Commission on Elections transparency server as of 3:18 pm, Friday, May 13.

He lost to Vice President Leni Robredo, his strongest rival, in the predominantly Muslim Marawi City where he ranked a poor third with 6,549 votes vis-à-vis Robredo’s 15,988.

But even then, Robredo was second only to Faisal Mangondato in Marawi City which gave the lesser-known Maranao presidential bet 24,247 votes.

Marcos placed second with 107,544 votes over Robredo’s 103,960 in Lanao del Sur where Mangondato dominated the presidential race with 143,034 votes.

Despite Murad’s support for Robredo, the son of the late dictator topped the May 9 race in the rest of the BARMM cities and provinces.

It was a neck-and-neck race for the two though in Cotabato City, BARMM’s regional center, where Robredo trailed Marcos by a mere 337 votes. Marcos won with 23,217 votes over Robredo’s 22,880.

Interestingly, Robredo saw a big loss to Marcos in Basilan where the ruling local political family, the Hatamans, declared their support for her presidential bid.

In many of Mindanao’s 27 provinces and 33 cities though, the support of dominant political families made a big difference.

In the island province of Camiguin, for instance, Robredo got only some 10% of the votes garnered by Marcos. It was a far cry from 2016 when she won the vice presidential race on the island with 38,030 over her rivals – Alan Peter Cayetano’s 5,498 and Marcos’ 2,148.

In this year’s elections, Robredo lost with Marcos winning 45,321 votes over her 4,591 in Camiguin.

The difference: Camiguin’s ruling Romualdo political dynasty was an ally of the Aquino administration during the 2016 elections. They left the Liberal Party (LP), joined the pro-Duterte Lakas-CMD a year later, and supported the Marcos-Duterte tandem in 2022.

This year’s dominant political dynasty in Misamis Occidental, the Oaminals, also gave Marcos an overwhelming 254,066 votes in the province as they made the three-decade-old Tan political family crumble.

There, Senator Manny Pacquiao ranked a distant second in the presidential race with 46,153, and Robredo with 32,804 votes.

Not enough to dislodge Marcos

Marcos and Robredo lost big to Pacquiao in Sarangani, a province in the Soccsksargen region which the boxer-senator identifies as his home province. There, Pacquiao won 160,476 votes over Marcos’ 78,230, and Robredo’s 13,483.

Davao City, however, easily made up for Marcos’ loss in Sarangani. The home city of his running mate gave him 624,357 votes over Robredo’s 30,529.

Marcos overwhelmingly won in the rest of the Davao region where Pacquiao ranked a poor second, and Robredo a poor third in the cities of Digos, Mati, and Samal.

Robredo trailed Pacquiao, who was second to Marcos, in all the Davao region’s provinces except in Davao del Norte.

Pacquiao and Robredo were also a poor second and third, respectively, to Marcos in the Mindanao cities of Pagadian, El Salvador, Gingoog, Oroquieta, Tangub, Valencia, General Santos, Bislig, and Cabadbaran.

Robredo, too, was a poor third, next to Pacquiao, in all three Zamboanga Peninsula provinces, Bukidnon and the two Misamis provinces in Northern Mindanao, Sarangani and South Cotabato in the Soccsksargen region, and Agusan del Norte and Surigao del Sur in the Caraga region.

In many of the Mindanao cities and provinces where Marcos dominated the presidential race, the votes cast for Robredo and Pacquiao, even if combined, were not enough to dislodge the late dictator’s son.

In Northern Mindanao, the Marcos-Duterte machinery proved to be impenetrable even in Cagayan de Oro City, once a bastion of the anti-Marcos movement in Mindanao in the ’80s and where Robredo first saw the first Mindanao city mayor, Oscar Moreno, declaring support for her in October 2021.

Moreno, who will step down as mayor in mid-2022, lost in Misamis Oriental’s gubernatorial race.

Cagayan de Oro, where the late Martial Law victim and senator Aquilino “Nene” Pimentel Jr. was mayor in the early ’80s, voted 233,326 for Marcos, and gave Robredo only 33,780.

Marcos also gave Robredo quite a beating in Zamboanga City – the home city of the assassinated Marcos dictatorship opposition leader mayor Cesar Climaco – where he garnered 222,178 votes over Robredo’s 54,332.

In Butuan City, the regional center of the Caraga region, Robredo too was a poor second to Marcos who won 116,154 votes over her 21,689.

Robredo lost even in other areas in the Caraga region where several local chief executives and congressmen openly supported her.

The most that the endorsements did for her was provide her some cushion such as in Agusan del Sur where Governor Santiago Cane Jr. and 2nd District Representative Adolph Edward “Eddiebong” Plaza threw their support behind her. Robredo trailed in Agusan del Sur with 144,176 votes against Marcos’ 152,029.

Besides Agusan del Sur, the only other province that gave Marcos a less than 50% vote share was Maguindanao (see map on Marcos’ vote share per province in Mindanao).