Robredo-Pangilinan want a ‘people’s campaign’ in 2022 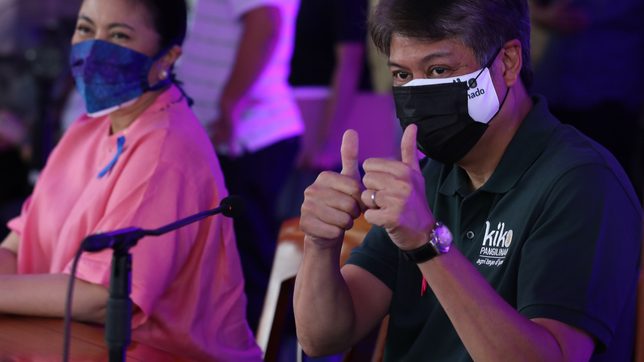 Senator Kiko Pangilinan (R) raises a double thumbs-up sign as he sat beside Vice President Leni Robredo in their first press conference together as a tandem for the 2022 elections on October 8, 2021.

Vice President Leni Robredo and her running mate, Senator Kiko Pangilinan, will strive to run a “people’s campaign” in the high-stakes 2022 elections – applying the key lessons they learned from the opposition’s landslide loss in the 2019 midterms polls.

Speaking in a Rappler Talk interview on Monday, October 11, Pangilinan said he and Robredo were overwhelmed by the deluge of support they received after they announced their respective last minute electoral bids in 2022.

Learning from the outcome of the 2019 elections – where no candidate  from the Liberal Party (LP)-led Otso Diretso slate managed to win a Senate seat – Pangilinan talked about the need to tap into and sustain the energy of their supporters in the coming months.

Pangilinan, as president of the once-ruling LP, was campaign manager of Otso Diretso.

He said the challenge is to translate the buzz online for himself and Robredo into actual finances and other resources that their tandem can use to make themselves more viable contenders in the face of the vaunted money and machinery of their more popular opponents.

“What are the key lessons learned? Of course, we have to have resources. Maybe in this case being a people’s campaign, we would be able to generate resources from the ground, especially the crowdsourcing because everything is digital. The tsunami of digital transactions is unprecedented,” said the veteran lawmaker in na mix of English and Filipinos.

The Commission on Elections has yet to release guidelines on how the 2022 campaign should be run amid the pandemic. But social media is emerging to be a prime battleground for aspirants and their political strategists.

Social media, in fact, even turned pink on October 7 when Robredo announced her presidential bid after months of discernment.

But the Vice President herself knows this is not enough to win, as she urged her supporters to go beyond their echo chambers and expand their ranks.

Robredo is running as an independent candidate in 2022, which she has described as a “symbolic” way of showing she is open to alliances with other parties.

Pangilinan, who ran as vice president under LP, said the party still considered Robredo as their standard-bearer.

He then defended Robredo and LP against those who criticize them for this unorthodox position that the party has found itself in.

“Her being an independent candidate is the best way of showing the citizens that everybody must get in, not just politicians, not just political parties, but ordinary citizens can also participate,” Pangilinan said.

Robredo’s campaign manager Bam Aquino also issued guidelines to supporters on how they can wage a “true people’s campaign” in 2022.

Like Pangilinan, Aquino sacrificed a potential Senate comeback in 2022 so he could focus on running Robredo’s presidential bid.

In his first campaign bulletin, Aquino appealed to supporters to lessen the toxicity online and to instead be more “pink-lusive” – a play on the word inclusive and the pink color that Robredo has since adopted for her 2022 campaign.

(Be inclusive. Focus our energies on ensuring our campaign would be for every Filipino. Let us not fight those giving suggestions on how we can further improve the campaign. Let us listen to them instead.)

Pangilinan reminded their supporters to stay vigilant. He banked on their passion and determination to help fuel the Robredo-Pangilinan tandem in the coming months.

“And of course, the vigilance that we must remind the voters that talagang come hell or high water, hindi biro itong mga kaharap nating katunggali. So dapat talagang we should not lose, we should sustain this support and sustain this energy and make it a people’s campaign,” Pangilinan said.

(And of course, the vigilance that we must remind the voters that come hell or high water, it is no joke to face off with our opponents. So we should not lose, we should sustain this support and sustain this energy and make it a people’s campaign.)

(And I believe if the people themselves take a leap of faith and make it a stand, as I said, no other political forces can top the power of millions of our countrymen fighting for meaningful change.)

Pangilinan initially had no plans running for vice president. He was set to seek his reelection in the Senate, where he is currently among the only four senators from the embattled opposition under President Rodrigo Duterte.

But when Robredo’s unity talks with other candidates fell through, she turned to her trusted ally Pangilinan to become her running mate instead.

The senator said it was a “call of duty” for him to step up not just for Robredo and the LP, but for the rest of the nation in 2022. – Rappler.com