SALVAGING. Residents in Pinamungajan chopping trunks and branches of fallen trees for firewood.

CEBU, Philippines – The concrete floor was all that was left of the house of farmer Arnel Ingarcial in Aloguinsan in southern Cebu, after Typhoon Odette devastated his town on the night of December 16.

He rebuilt his home using wood he was able to salvage from the ruins. 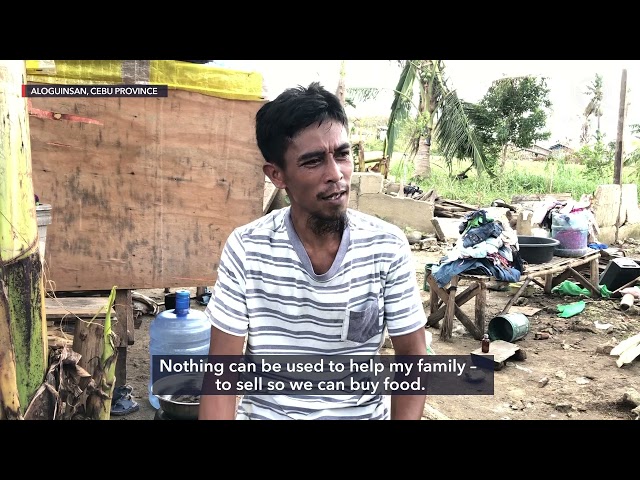 This Christmas, Ingarcial is grateful for the small things, particularly, for the five kilos of milled corn he won in a game of bingo after the typhoon. This is what he fed his family after provisions from the Cebu provincial government and the barangay council ran out.

(I’m thankful that my cousin bought five kilos of corn-rice. He gave it away through a game of bingo; blackout. It was very fortunate that my wife won. That’s all we’ve been cooking now. When it runs out, we will have nothing left to eat.)

He had just come home from doing repair work for one of his neighbors when a volunteer for a donation drive told him that one of the students he had hosted for an immersion in 2016 – this reporter – came to visit him. He looked skinnier now, with sunken cheeks.

Outside his home, fallen banana trunks surrounded the debris as well as his relatives’ and neighbors’ battered houses.

Ingarcial said that the day after Odette’s onslaught, he returned to Aloguinsan from Talisay City, about 50 kilometers away from his hometown, where he did some carpentry work. He had to walk 11 kilometers until he was offered a ride to the town just before Aloguinsan to be able to see his family. At the time, he feared that he might have lost them in the typhoon.

Thankfully, his wife, daughters, and one-year-old son were safe after taking shelter in his cousin’s house. What awaited him was a level of devastation not far from what he had imagined.

(When I came home, it’s like something inside me collapsed, seeing my surroundings. Even when I was still in the highway, I could not recognize where I was because of the damage left by Odette. And so from there, I stopped expecting my house to still remain standing.)

Nothing was spared. The banana plants, coconut trees, were all wiped out, Ingarcial said. There was nothing left that he could sell for food.

While waiting for his banana plants to bear fruit, which he would sell for P20 per kilo, Ingarcial would go fishing half a kilometer away from his home. After Odette, he did not have these options.

(My main source of livelihood is the sea. But after Odette came, we couldn’t get near the waters because the waves have become too strong. It has become very hard to fish.)

With no crops left to sell or consume, and with the difficulty in fishing, Ingarcial and his neighbors were left with nothing to depend on. Nothing much, too, was left in Barangay Gimbawian, Pinamungajan, the village of farmer Eugenia Abella.

(Everthing is gone. My bananas and cassava. Only the sweet potatoes remain. My okras are gone, so are my ampalayas. My crops are gone. Even the onions that I’ve planted seem as if they’ve been dug up.)

Abella grew mangoes, bananas, coconuts, and other vegetables she did not even bother to name because one thing is true for all of them: they were all gone. The surviving sweet potatoes would not be ready for her family’s consumption for another three months.

Two of her seven goats died, but this is better compared to her chickens which all perished following the typhoon.

Abella not only had to worry about her own family – her husband and three children worked in Cebu City, 65 kilometers awat – but 13 others who lived under her roof.

During the storm, Odette tore off the roof of her home. Abella said she had to shield a member of her household with a mattress because he could not walk. 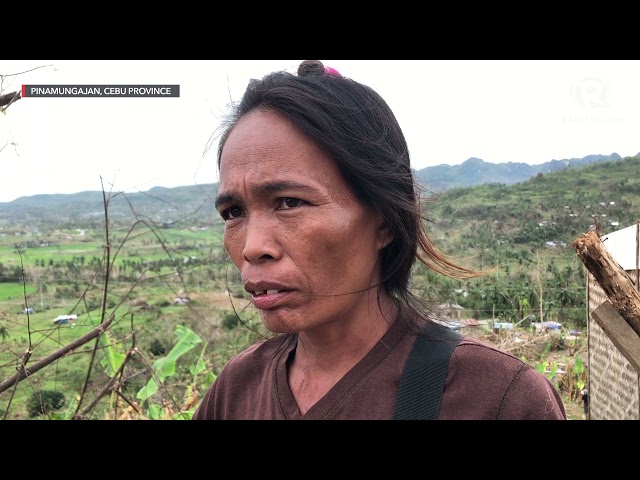 (It was an intense typhoon. All that was going through my mind was my family because we weren’t all together at the time. And the exhaustion and the cold. It was horrible because we did not even have shelter because our roof was destroyed.)

She said she received aid from the barangay council – five kilos of rice and two cans of sardines for each household which, in Abella’s case, is 13 people.

Like others in their sector, farmers in Cebu had lived in the margins even before the calamity. Often, a day of labor is barely enough for them and their families to get by. The recent typhoon only exacerbated their already dire situation.

Farmers who work to provide food for everyone else have again found themselves struggling to put food on their own tables.

The Department of Agriculture said Odette’s damage to the agriculture sector across 10 regions affected by Odette, including Central Visayas, reached P3 billion – a figure that is expected to rise as damage reports from the regions are finalized.

A week after Odette, almost all barangay roads in the province have become passable to four-wheeled vehicles, giving access to aid from other residents and private groups to far-flung farming barangays.

Both Ingarcial and Abella said that they have not heard from their local governments on when the next batch of aid would arrive.

Until then, they would be living off of the donations gathered by the Cebu-Bohol Relief and Rehabilitation Center, a nongovernment organizational that distributed relief goods to them that day.

Ingarcial said he would try and work odd jobs for income. Abella is set on continuing to till her farm once the dust settles.