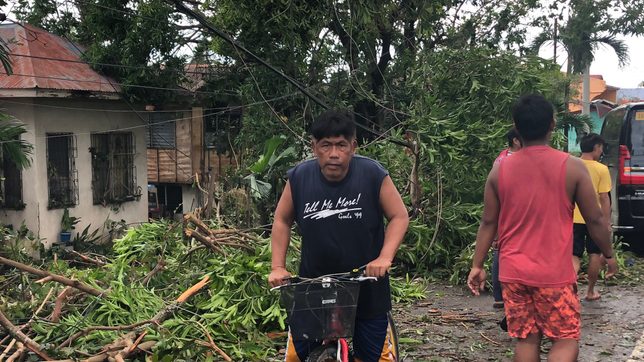 Facebook Twitter Copy URL
Copied
In the next days, the provincial government is set to meet with power distributors to discuss the restoration of Cebu’s electricity

Jerson was one of the passersby who offered to give media personnel a ride to the Sibonga Municipal station for free. The road was inaccessible to cars due to a fallen mahogany tree, the third one that had to be cleared for Cebu Governor Gwendolyn Garcia’s ocular inspection convoy.

Jerson said they did not anticipate the strength of Odette. This was common among residents of Cebu Province’s southern towns because for decades, the island has been spared from major damage by typhoons.

“Gamay ra gyud kayo among pagkaon (we’re really short on food),” he told Rappler, during the motorcycle ride to the municipal hall.

(What we really need is food. All we have are leftovers from the past days. We really were not able to prepare, not at all.)

Edgar said this was “undoubtedly” the strongest typhoon he experienced in Cebu.

Cebu Province was declared to be under a state of calamity by Garcia on Friday, December 17. The declaration will enable mayors to access their development funds, giving them more leeway to spend for relief and rebuilding operations.

(Clearing operations are our top priority right now so that there would be access [to aid].)

Communication lines are down in most parts of the province. Because of this, Provincial Disaster Office chief Neil Sanchez said that they were unable to get the updated tally of damage costs and casualties from the southern towns.

(As of yesterday, we’ve already contacted all towns – north and south. As to casualties, we don’t know the numbers yet because we don’t have communications.)

The provincial government’s convoy was able to make it only as far as Sibonga, a town 54 kilometers from Cebu City. The roads to the rest of the southern towns are still completely inaccessible.

Garcia said she will be meeting with the Capitol’s project contractors on Saturday to ask them to lend the provincial government their equipment to expedite the road clearing operations.

“I will be asking them to offer their equipment, including chainsaws and backhoes in order to clear the national road,” she said.

Garcia said food aid is ready for distribution. The Capitol will also be providing basic materials for residents who have lost their homes like galvanized iron, nails, and cement.

In the next days, the provincial government is set to meet with power distributors to discuss the restoration of Cebu’s electricity.

Jerson Tenebro, the carpenter from Sibonga, said he is planning to take on odd jobs to recover from the typhoon, and do repair work from his neighbors. What lies ahead is a two-fold rebuilding project from Jerson: that of his community, and that of his home. – Rappler.com