“Amid a crisis on student dropouts and mental health problems, Marcos’ solution is to add to the burden of students by forcing them to go under ROTC,” said Akbayan Youth, the Student Council Alliance of the Philippines and the Bukluran ng mga Progresibong Iskolar in a joint statement.

Marcos included making the ROTC mandatory as a priority legislative agenda in his first State of the Nation Address (SONA) on Monday, July 25.

“The aim is to motivate, train, organize and mobilize the students for national defense preparedness, including disaster preparedness and capacity building for risk-related situations,” Marcos said, drawing applause from lawmakers and other guests at the Batasang Pambansa

The government scrapped it in 2002 when an investigation on the 2001 murder of a University of Santo Tomas student found that he had exposed alleged corruption in the program.

The youth groups said Marcos’ focus on mandatory ROTC “shows that he is out of touch with the needs of the youth and students.”

“During the height of the pandemic, more than 4-million students dropped out of their schools. More than half of students reported that online classes have affected their mental health,” they said.

For the Alliance of Concerned Teachers (ACT), mandatory ROTC is “not the answer to instill nationalism among the youth.”

“The problem is in the curriculum of the K to 12 itself, because it weakened the teaching of Filipino and Philippine history,” ACT said in a statement on Tuesday.

ACT is an organization composed of some 300,000 public and private school teachers in the country.

Marcos also said he wants a “careful review of the K to 12 curriculum,” but offered few details.

“And once again, I am not talking about history, or what is being taught. I am talking about materials that are necessary for effective teaching in this day and age,” said the President, who called for greater use of new technology in education. 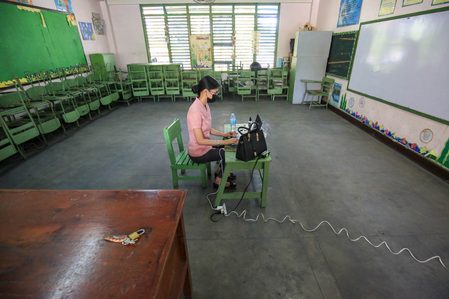 Vice President and Education Secretary Sara Duterte earlier expressed hopes that Marcos would include mandatory ROTC in his legislative agenda.

The House of Representatives passed in May 2019 its version of the measure, but the Senate did not. Some legislators argued that the program would expose students to corruption.

Duterte actually advocated for mandatory ROTC even before he became president, saying in 2015 that it could help augment government forces in the face of Chinese aggression in the disputed West Philippine Sea. He would later cite the potential to “instill discipline and patriotism among young Filipinos.”

The Vice President push for mandatory ROTC has also been met with criticism, with activist groups saying compulsory military service sends a strong message that “any dissent will be met with force.” Marcos has the support of several lawmakers. Senator Sherwin Gatchalian claimed a survey he commissioned had results showing 77% of parents in favor of ROTC in grades 11 and 12.

It is now up to the 19th Congress whether they will act upon the calls of both the President and the Vice President.

Do you think making ROTC mandatory would instill a sense of nationalism and patriotism among Filipino youth? Sound off in the comments! – Rappler.com