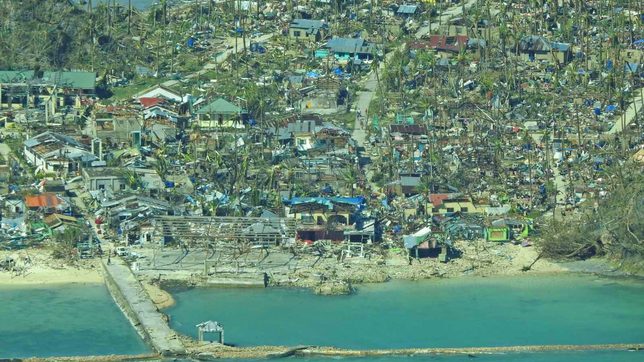 CAGAYAN DE ORO, Philippines – Children were carefree, playing happily at the newly built Siargao Sports Complex in Dapa town that was turned into a preemptive evacuation center the morning before Typhoon Odette unleashed its fury on the island.

The typhoon made landfall on the island in Surigao del around 1:30 pm on Thursday, December 16. Torrential rain and winds roaring at 195 kilometers per hour, with gusts of up to 240 km/h tore down all communication lines. Overnight, until mid-morning of December 17, nothing was heard about residents of the island.

The children were from families who were evacuated from different hazard-prone villages in Dapa, one of the eight towns of the world-famous island. There were also stranded tourists who sought shelter at the sports complex, which was inaugurated by President Rodrigo Duterte only on November 7.

Children played with toys and some chased each other as parents worried about the coming strong typhoon. The older boys played basketball, and girls gathered on one spot to chat with some pets. One girl was skateboarding.

That morning, they went on with their games, unmindful of what their elders feared would take place: the worst possible havoc.

The Philippine Coast Guard on Friday, December 17, released photos showing the extent of destruction the powerful typhoon caused in Siargao, which is dubbed as the Philippines’ surfing capital.

The photos showed fallen trees, branches, and debris everywhere, and the destruction of Siargao’s airport terminal, hinting devastation of communities on the approximately 430-square kilometer island.

The extensive destruction was a result of the landfall of Typhoon Odette, the Coast Guard said on its Facebook page.

A video taken during an aerial survey conducted by Coast Guard’s Aviation Force on Friday afternoon also showed many Siargao farms submerged in muddy water. Stills from that video rammed home the terrible toll exacted by Odette on the island.

He said he and his wife Sol, a former governor, were in the municipal hall of San Isidro when the typhoon made landfall at 1 pm on Thursday.

“The typhoon hit at 1:30 pm. At 2 pm the strongest probably Category 4 Typhoon battered San Isidro for 2 hours which totally damaged buildings and other structures,” Matugas said. “The whole island is totally devastated with an estimated damage of P20 billion… Our house in Dapa is 80% damaged.”

Matugas said at least two were reported dead as a result of Typhoon Odette’s landfall.

Duterte said he was planning on visiting the province and other areas adversely affected by the typhoon starting on Saturday.

“I would hit maybe Leyte, Surigao, and if there is enough time, Bohol. Then the day after, I would try to visit Cebu, then dito sa eastern side of the islands – Bacolod, Iloilo,” Duterte said.

Matugas said it took them six hours to travel from San Isidro to Dapa town because roads were impassable due to debris, fallen trees, and electric poles.

Department of Public Works and Highways (DPWH) officials and workers “are not doing their job” in clearing the roads, he complained.

“We have established initial contact with Siargao Airport OIC Mr. Richard Alas… Per Mr. Alas’ initial assessment, the damage of Odette in Siargao is devastating. No updates yet as to casualty,” Representative Matugas said on his FB page.

He said the airport runway was cleared of debris to allow planes and choppers to deliver relief goods.

Matugas said the National Disaster Risk Reduction Management Council established satellite communications in Siargao where telecommunication services were cut off during the landfall. –with a report from Pia Ranada/Rappler