Facebook Twitter Copy URL
Copied
(1st UPDATE) 'To the prime movers of this baseless complaint and those who have supported them, know this: I wish you well, and I wish that you will also find your own peace,' Leonen says in response to the decision

The House justice committee on Thursday, May 27, voted 44-0 to dismiss the complaint against Leonen, finding the allegations largely based on hearsay. It was initially 37-0, but more votes in support of Leonen came in after the hearing. 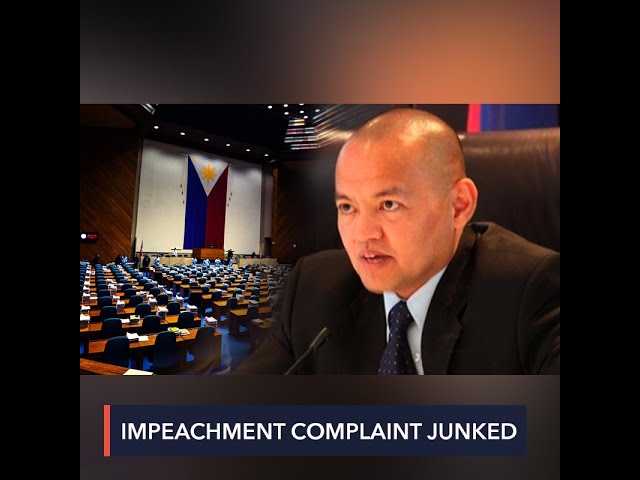 The House rules on impeachment says the committee must make two determinations – insufficiency in form and in substance, which for previous cases had taken several hearings. But only after more than two hours of session, committee chairman Leyte 3rd District Representative Vicente Veloso already called for a vote to “dismiss the complaint,” meaning outright. But in the hearing, Veloso said that the committee could junk it outright based on the regular rules of court, “which was suppletorily adopted by the rules on impeachment.”

Several lawmakers like Albay 1st District Representative Edcel Lagman and Deputy Speaker Rufus Rodriguez voted to dismiss without prejudice to return it to the Secretary General.

After the vote, Veloso said: “Compliant to Section 3, Rule 4, that we have to return the complaint to the Secterary General within three session days, to explain that we dismissed not only on insufficiency but on the fact that we had to dismiss the complaint based on Section 1, Rule 16 of the Rules of Court.”

Deputy Minority Leader Carlos Zarate, who is an ex-officio member of the committee, also said they treated the complaint as an unsigned one that can be outrightly junked.

“If its verification is defective, it is an unsigned complaint, so it is just a piece of paper. So the effect is outright dismissal – including substance. Even the substance becomes defective, too,” Zarate told Rappler in a mix of English and Filipino.

[OPINION] The trouble with Justice Leonen The complaint was filed by Edwin Cordevilla of the group Filipino League of Advocates for Good Government, with the required endorsement of Ilocos Norte 2nd District Representative Angelo Marcos Barba, cousin of former senator Bongbong Marcos. Leonen was the ponente of the unanimous ruling that junked Bongbong’s electoral protest against Vice President Leni Robredo.

Deputy Speaker Pablo John Garcia said, “Even if we grant liberality in form, we must dismiss it based on substance.”

Lagman touched on substance, such as the ground of culpable violation of the Constitution for not resolving dozens of cases assigned to Leonen within 24 months.

Section 15, Article VIII of the Constitution says all cases must be decided by the Supreme Court within 24 months, yet this rarely happens. Lagman said this rule is “directionary and not mandatory.” (READ: JBC probes double standard in deadline to decide cases)

Lagman also said that even if it is true that Leonen did not file Statements of Assets, Liabilities, and Net Worth (SALN) from when he was a professor at the University of the Philippines College of Law, it is not an impeachment ground.

“The alleged failure happened before Justice Leonen was appointed  Associate Justice in 2012. An impeachable incumbent official shall only be impeached for offenses committed during his incumbency. This would foreclose malevolent searches for bygone skeletons in distant closets,” said Lagman.

Lagman also cited the 2018 Supreme Court case Del Rosario vs People,  which set an eight-year prescriptive period for Republic Act No. 6731 – the Code of Conduct for Public Officials that governs the filing of SALNs. Based on that decision alone, even if Leonen failed to file his SALN up until 2009, the crime had already prescribed or lapsed, said Lagman.

Many have observed the apparent lack of appetite among the House to pursue the impeachment, as it had taken them five months to refer it to the committee on justice, when the rules say it must be done within 13 session days.

Another ground in the complaint is betrayal of public trust, saying Leonen was “partial” to former president Benigno “Noynoy” Aquino and biased against President Rodrigo Duterte, based on the justice’s votes in the Supreme Court.

Abante said: “Are we supposed to impeach a justice of the Supreme Court because of his political beliefs or his affiliations, or who appointed him? Is that what the Constitution states?”

After the hearing, House Speaker Lord Allan Velasco, also a close Duterte ally, said: “Congress can now focus more on the task at hand, which is to produce legislation that would further help our kababayans and the economy recover from the devastating impacts of the COVID-19 pandemic.”

The Supreme Court earlier rejected Solicitor General Jose Calida‘s request to get copies of Leonen’s SALNs for the purposes of initiating a quo warranto, a stark contrast to the attitude of the justices toward former chief justice Maria Lourdes Sereno.

Justices not only trooped to the House to testify against Sereno, they also ousted her 8-6 in an unprecedented and very controversial quo warranto proceeding.

In a statement, Leonen said that the dismissal “affirms our faith in the House of Representatives under the leadership of the current Speaker of the House as well as the committee on justice.”

“To the prime movers of this baseless complaint and those who have supported them, know this: I wish you well, and I wish that you will also find your own peace,” said Leonen. – with reports from Rambo Talabong/Rappler.com