Facebook Twitter Copy URL
Copied
The ball is now in the hands of the Senate, after the House approves the Marcos administration's proposed 2023 budget within a month since the executive submitted the request to the lower chamber

MANILA, Philippines – The proposed 2023 budget of the Marcos administration officially hurdled the House of Representatives on Wednesday, September 28, just 37 days after the executive branch submitted the appropriations request to the lower chamber.

A total of 289 congressmen voted in favor of House Bill No. 4488, while only three lawmakers – specifically, members of the progressive Makabayan bloc – voted against the measure.

It only took the House around a week to finish the plenary debates on the proposed budget of 75 government agencies, enabling the chamber led by Speaker Martin Romualdez to meet its self-imposed target of having next year’s budget approved before the House goes on a recess by October.

Because President Ferdinand Marcos Jr. certified the appropriations bill as urgent, the House was able to pass the P5.268-trillion budget request on second and third reading on the same day.

House leaders have been adamant on swiftly passing the General Appropriations Bill to avoid a reenacted budget for 2023, although this was not the first time that the chamber met its target deadline on passing the GAB.

“A reenacted budget would mean delays in the delivery of public services to the detriment of our people. The National Economic Development Authority estimated that in 2019, the reenacted budget costed us 1 to 1.2 percentage points of the gross domestic product growth,” Marikina 2nd District Representative and House appropriations panel vice chairperson Stella Quimbo said on Tuesday, September 27.

The House will now submit the GAB to the Senate, which has the constitutional power to propose its own version or concur with amendments.

After the Marcos administration’s budget request hurdles the Senate, both houses of Congress will meet at a bicameral conference to settle differences between the two appropriations bills that they approved. 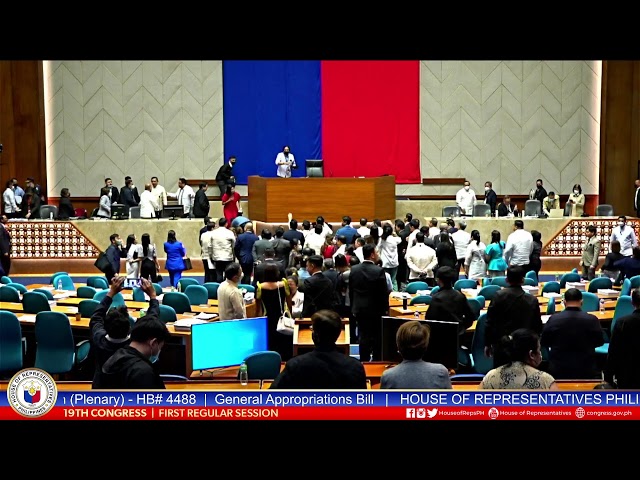 Under the government’s proposed 2023 budget, which is up 4.9% from the 2022 appropriations, the top priorities are education, infrastructure, health, social protection, and agriculture.

Before the passage of the budget, the Makabayan bloc spoke in the plenary floor to express their dissatisfaction over the supposed shortcomings of the GAB to directly address the immediate needs of underprivileged and struggling Filipinos.

The left-leaning group lamented either the lack or insufficient funding for programs on social amelioration, production subsidy for farmers, wage subsidy for small businesses, and fuel subsidy for drivers.

They also decried the significant budget for the defense sector and the confidential funds for the offices of the President and Vice President.

“Our farmers, fishermen, and laborers are not immortals for us to expect they can live without supplemental aid,” Act Teachers Representative France Castro said in Filipino. “Every year that Congress lets the national budget fail to address the needs and interests of the public is tantamount to our abandonment of them.” – Rappler.com