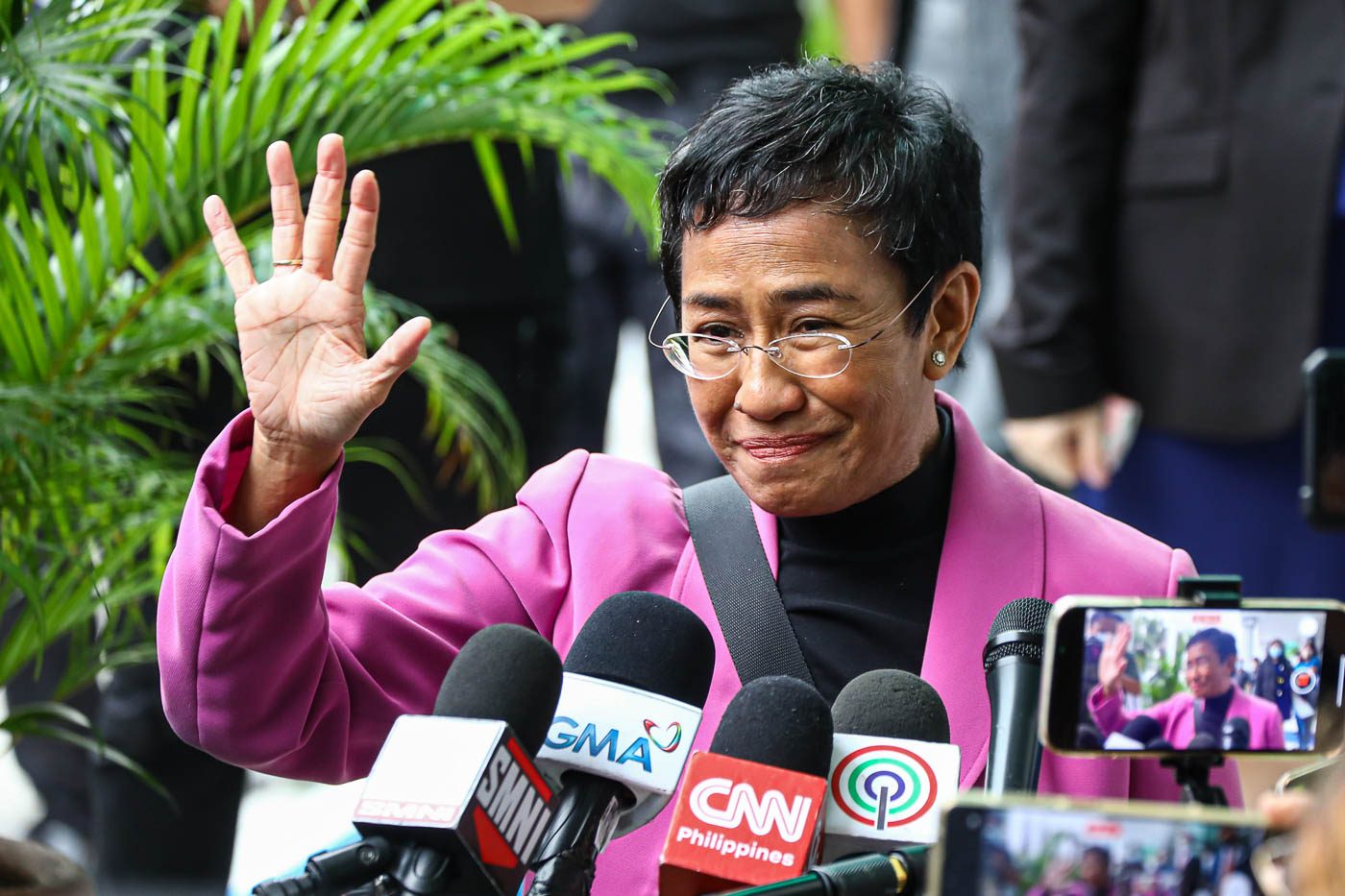 ONE LESS CASE. Nobel laureate and Rappler CEO Maria Ressa speaks to the media after the Court of Tax Appeals acquitted Rappler Holdings Corporation of four charges of tax evasion that were filed in 2018 by the Duterte administration, on January 18, 2023.

MANILA, Philippines – Foreign governments across the world welcomed the Philippine Court of Tax Appeals’ (CTA) decision to acquit Nobel laureate Maria Ressa and Rappler Holdings Corporation (RHC) of tax evasion charges filed by the Duterte government in 2018, praising it as an “important step” in upholding the rule of law in the country.

In a tweet on Wednesday, January 18, European Union High Representative for Foreign Affairs Josep Borrell Fontelles said the regional bloc hoped that pending cases against Rappler and Ressa would also be resolved soon.

“We trust that remaining charges will be resolved quickly. We continue to support journalists’ crucial work,” Fontelles said.

A separate statement from the Media Freedom Coalition, co-chaired by Canada and the Netherlands, echoed this, saying the outcome “marks an important and positive step towards upholding the rule of law and media freedom.”

“We…are encouraged that this decision will help guide future implementation and regulation that impacts media freedom to effectively safeguard and protect it,” they added.

Rappler Holdings and Ressa’s acquittal was a rare legal victory for the embattled newsroom and journalist, who for years have been subject to a slew of legal attacks. The series of cases filed against Rappler and Ressa threatened to jail the Nobel laureate and strip the media outlet of its license to operate.

With the tax evasion case filed in March 2018, the former Duterte government accused RHC and Ressa of evading tax payments when it raised capital through its partnership with foreign investors North Base Media (NBM) and Omidyar Network (ON). It argued that income tax and VAT should have been paid in the issuance of Philippine Depositary Receipts or PDRs to the two entities.

PDRs are financial instruments commonly used among media companies to allow foreign investment without violating a constitutional rule that media companies should be 100% Filipino-owned.

On Wednesday, the court ordered the acquittal, saying the prosecution had failed to prove their guilt beyond reasonable doubt. Rappler’s lawyers said that in the last 20 years, the BIR has treated PDRs as derivatives of stock for which only documentary stamp tax was due to be paid.

In an 80-page decision, the CTA said, “No gain or income was realized by accused in the subject transactions.” The CTA also said, “There is nothing in the wordings of the PDR instruments and the PDR subscription agreements that would show the foreign entities NBM and ON will become owners of the shares of stock of Rappler.”

On Twitter, German Ambassador Anke Reiffensteul hailed the acquittal as a “victory for journalists, press freedom, and the rule of law in the Philippines.”

The Media Freedom Coalition is a network of 51 countries advocating for media freedom and the safety of journalists in their respective countries and abroad. The coalition said it uses a mix of diplomatic interventions, advocacy, support for legal reforms, international events, and providing funding for such initiatives to promote press freedom worldwide.

Its members include Australia, the United States, France, Japan, the Republic of Korea, United Kingdom, and Ukraine, among others.

Foreign governments watching the case closely took note of the court’s decision and said it was “encouraged” that the ruling would guide the future implementation of laws in the Philippines which impact media.

“Any measure that undermines the independence and freedom of the press must be strictly scrutinized with the highest standard of law and human rights,” they said.

After the junking of its tax evasion case, Rappler and Ressa now have three active court cases pending. This includes the appeal of Ressa and former researcher Reynaldo Santos Jr. in their conviction for cyber libel pending at the Supreme Court, a lone tax case at the Pasig City Regional Trial Court, and the appeal on the closure of Rappler pending at the Court of Appeals.

Mothers, too, can be sued under VAWC law – Supreme Court