“Part of the reason why journalists are under attack has been that the same system first used for marketing is now being used for geopolitical power play; for information operations started by Russia,” said Ressa.

Ressa has been reporting on disinformation and how social media platforms have been used to spread lies and spew hate. She has since sounded the alarm on how tech giants “favor lies laced with anger and hate that spread faster and further than facts.”

“What’s changed is that what kept it objective in the past was the entire process in the newsroom – a reporter, a subeditor, an editor, a managing editor. A very expensive process. In the age of the internet, that expensive process gets distilled to a pageview,” she said.

She highlighted how important it is for newsrooms to find ways to collaborate. “The area for competition for news is dead. I think this is the time we are on the same page fighting for facts,” she said.

“The last part of this is how do we survive the destruction of the advertising business for news? … Independent journalism must survive even if as we wait for nations to put guardrails on this insidious manipulation of the distribution of news – social media,” she said.

Ressa also noted that social media giants need to do more, as several countries, including the Philippines, are holding their elections in 2022.

“They have to do a lot more. It’s almost too little too late.”

She said that tech giants, such as Facebook, were willing to restrict content on their platforms under “break-glass measures” to protect the US elections. “I hope they do the same in every election around the world,” she said. In the case of the Philippines, Ressa mentioned that dictator’s son and presidential aspirant Bongbong Marcos has been leading pre-election polls. As early as 2019, a Rappler investigation has shown that the Marcoses have been using social media to release massive amounts of propaganda in a bid to rehabilitate their image.

“If social platforms don’t do enough, the disinformation network – and I’m very specific in saying disinformation – it is meant to manipulate us… This would be a battle for facts and the way we have seen in 2015 is the chipping away – death by a thousand cuts – of history, of democracy. We will see this play out in our May elections,” she said.

Ressa won the Nobel Peace Prize along with Russian journalist Dmitry Muratov on October 8. They are set to receive the award in Oslo on Friday, December 10.

During the news conference, Ressa said that her Nobel Peace Prize win has placed the spotlight on journalists – to show how dangerous and difficult it is to do their jobs.

She hopes this win “means better days ahead.”

“It’s a time that is pivotal. The Nobel Committee shining the light on journalists is one side of the coin. The other one is that what are we going to do so we (journalists) can be safer, so we can bring the facts back,” Ressa said.

She added, “because just doing the stories alone are not going to be enough at this point in time.” 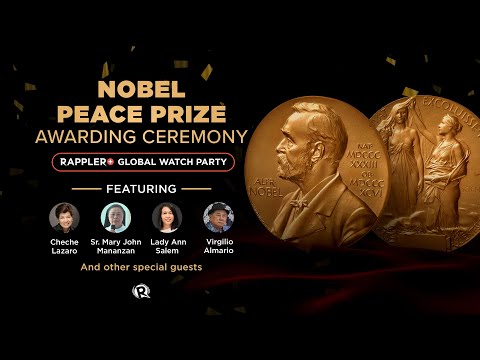 As big tech disrupts the news ecosystem and the media’s gatekeeping powers, Ressa said that now more than ever, the world needs journalists.

“The new gatekeepers [are] technology, social media companies that have essentially watered-down facts, made it so that lies laced with anger and hate actually spread faster and further than facts,” said Ressa.

“That’s the core – the trigger for the rise of cheap armies on social media that are rolling back democracy.”

But she said that this does not necessarily mean that it is a bad time to be a journalist.

“What it means is that we need to strip away our old ideas because this is part of the old world. We need to embrace that we have to embrace this technology and we need to create a new world,” Ressa said.

Ressa is the first Filipino to win the Nobel Peace Prize and is the only woman in this year’s roster of laureates. Ressa and Muratov won the prize “for their efforts to safeguard freedom of expression, which is a precondition for democracy and lasting peace.”

The Rappler CEO has been the target of attacks for her media organization’s critical coverage of President Rodrigo Duterte’s administration. Ressa is also a key leader in the global fight against disinformation. – Rappler.com