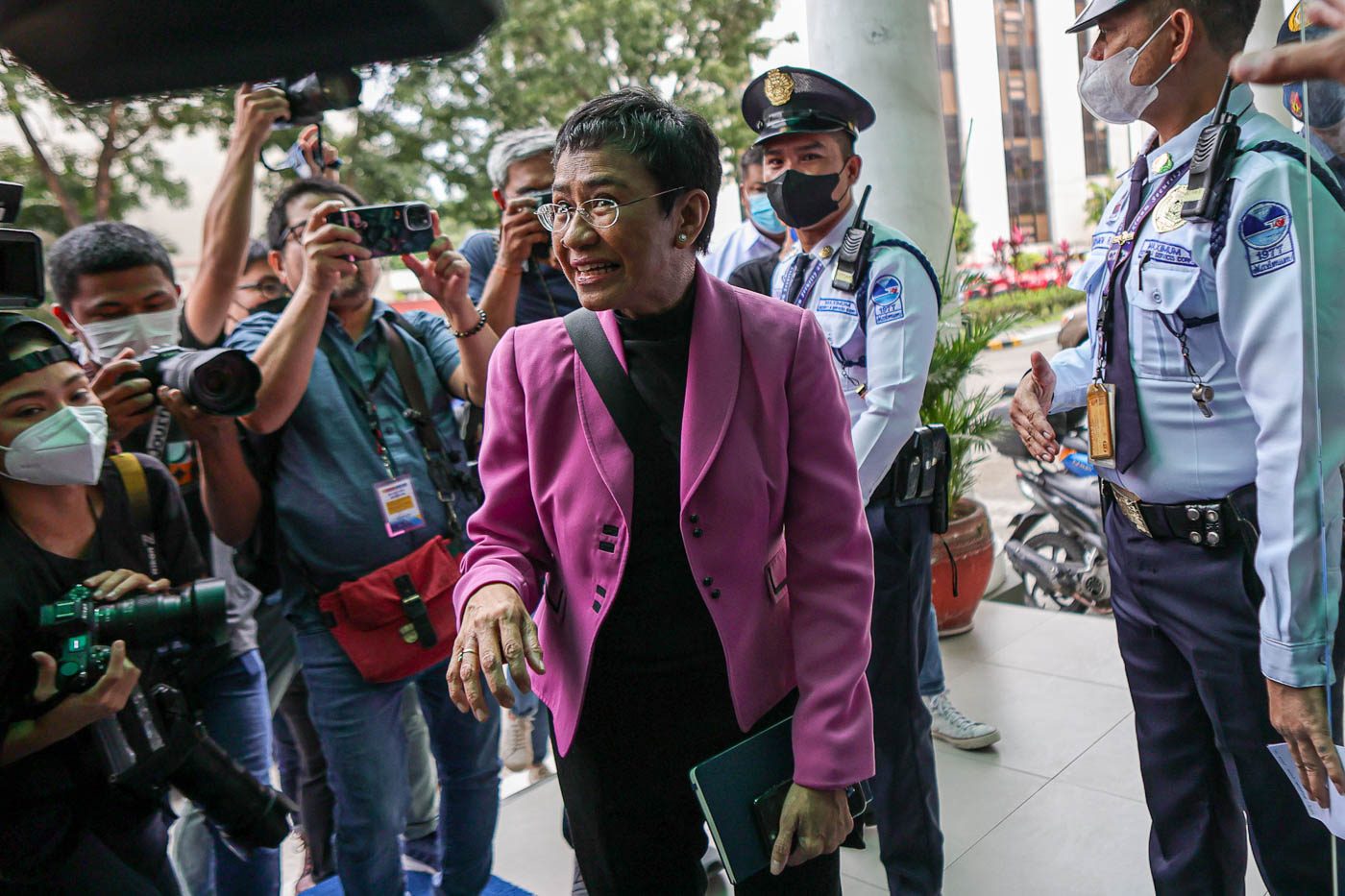 PROMULGATION. Nobel laureate and Rappler Holdings Corporation president Maria Ressa arrives at the Court of Tax Appeals in Quezon City for the promulgation of four tax cases vs RHC, on January 18, 2023.

Facebook Twitter Copy URL
Copied
(1st UPDATE) The cases had caused some uncertainty and nervousness in the business community, and the acquittal is seen as 'a sign that the legal system is fair and impartial,' says former mayor and corporate lawyer Oscar Moreno

They said the decision on Wednesday, January 18, is also seen as having a positive impact on the investment climate, with companies and investors now feeling more confident about issuing PDRs and raising capital.

The cases had caused some uncertainty and nervousness in the business community, and the acquittal is seen as “a sign that the legal system is fair and impartial,” said former Cagayan de Oro City mayor and banker-lawyer Oscar Moreno.

Moreno, who once served as vice president and chief legal counsel of BPI Capital Corporation and an associate director of Ayala Corporation’s strategic planning group, said the cases had been “counterproductive” and hurt the economy.

“The cases were transcendental and could have reversed the economic boom that started in the 1990s. Suddenly, corporations and investors became edgy and started having second thoughts about PDRs. As a result, many held back. I can just imagine how corporate executives and investors watched this closely until the CTA reached its decision,” Moreno said.

He said the issuance of PDRs has always been a universally accepted practice and not unique to Rappler.

“From the start, what Rappler did was aboveboard and not violative of any law. It has been the practice. Unfortunately, this case was used against the critical press, and as a result, it affected the country’s investment climate and the economy,” Moreno said.

PDRs, he explained by using an analogy, merely entitle investors to “fruits but not dispose of the tree – they can do whatever they wish with the fruits but they don’t own the tree.”

A former dean of the College of Law of San Sebastian College, Cagayan de Oro City 2nd District Representative Rufus Rodriguez, also lauded the acquittal of Ressa and Rappler, saying the tax evasion cases “should not have been filed in the first place.”

Rodriguez said, “These cases were mere harassment against Ressa for her and Rappler’s objective, fair, and fearless criticism of some actions of the Duterte administration.”

The tax evasion cases and their outcome showed the importance of the three branches of government operating independently from each other, said Jose Edgardo Uy, another Mindanao-based lawyer.

Uy, a former vice president of the Cagayan Electric Power and Light Company, criticized the actions of the government against Ressa and Rappler during the Duterte administration as a mockery of the country’s justice system with the investment climate as collateral damage.

“The wheels of justice must not turn in favor of the connected and influential,” Uy said.

Davao lawyer and former Bayan Muna representative Carlos Isagani Zarate said he has yet to see how the CTA tackled the issue on the issuance of PDRs in its ruling, but added that the acquittal was a welcome one and showed how facts trumped political motivations in this case.

Zarate also called for the dismissal of other cases faced by Ressa and Rappler, and other journalists facing similar “trumped-up charges” such as Frenchie Mae Cumpio of Tacloban City.

Cumpio has been in detention since 2020 after she was linked by the military to the New People’s Army.

“We truly laud members of the judiciary for exercising genuine independence, especially in a climate of impunity,” Zarate said.

After more than four years, the 1st Division of the CTA decided to acquit Ressa and Rappler’s holding company of tax evasion. The Duterte administration, through the Bureau of Internal Revenue, had alleged that Ressa and Rappler evaded tax payments when they raised capital through PDRs issued to foreign investors North Base Media and Omidyar Network.

Rappler still faces three other court cases: the appeal of Ressa and former researcher Reynaldo Santos Jr. in their conviction for cyber libel pending at the Supreme Court, a tax case at the Pasig City Regional Trial Court, and the appeal on the closure of Rappler pending at the Court of Appeals. – Rappler.com