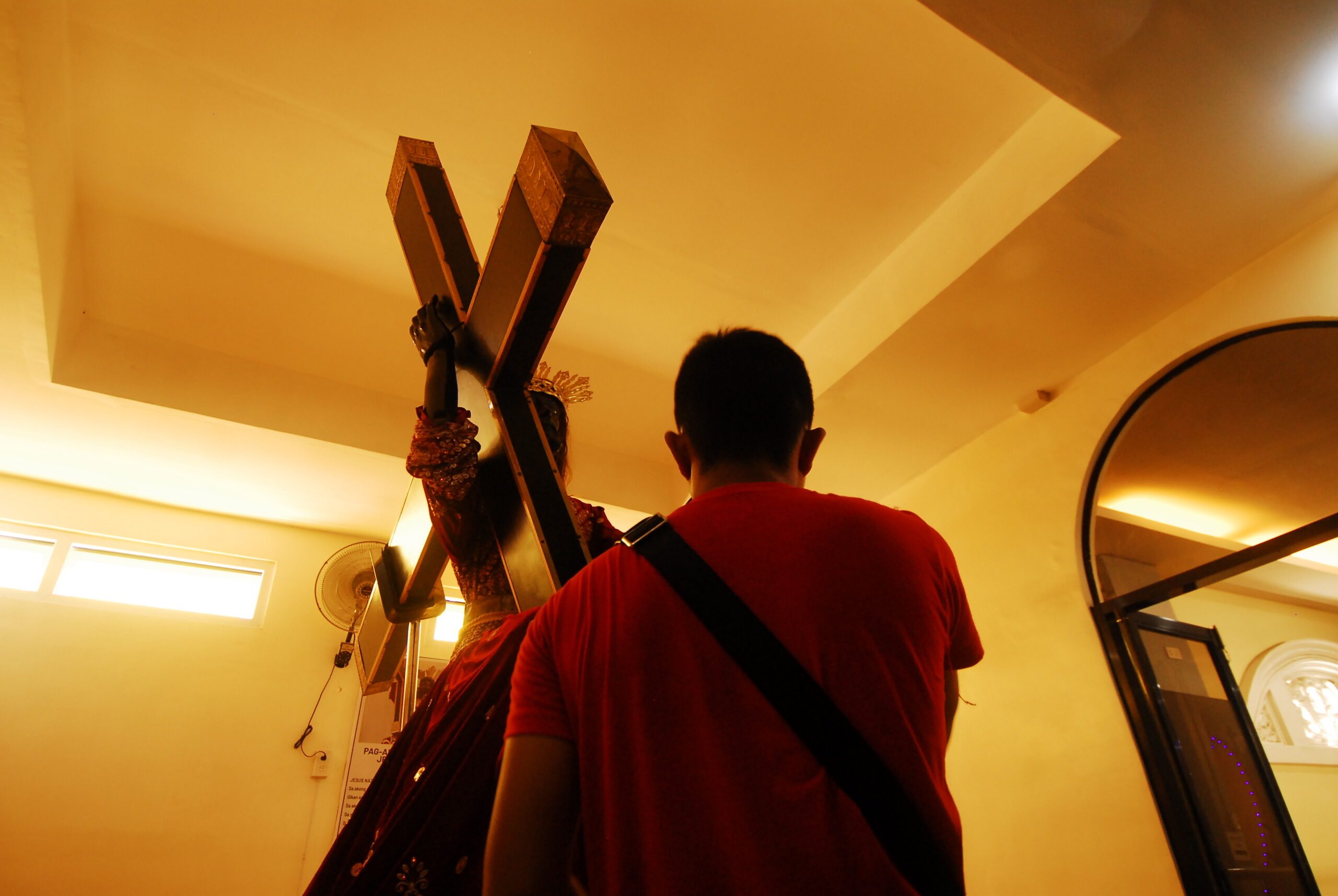 DEVOTION. A religious devotee prays before an old replica of the original Black Nazarene statue at the Nuestro Padre Jesus Nazareno Parish in Cagayan de Oro.

Facebook Twitter Copy URL
Copied
Cagayan de Oro will be the only city to stage the Traslacion, an annual procession to reenact the late 18th-century transfer of the religious icon from its original shrine in Intramuros to the Quiapo Church

CAGAYAN DE ORO, Philippines – Cagayan de Oro takes center stage as it prepares to parade one of three old replicas of the life-sized, dark-hued, wooden sculpture of the Black Nazarene on Monday, January 9, the way it was done during pre-COVID-19 pandemic times.

Cagayan de Oro will be the only city to stage the Traslacion, an annual procession to reenact the late 18th-century transfer of the religious icon from its original shrine in Intramuros to the Quiapo Church.

But in Cagayan de Oro, it will be a day for Black Nazarene devotees to celebrate the arrival of one of the Callejeros, or replica pilgrim image, in the city.

“It’s a day of remembrance of the transfer,” said Monsignor Rey Monsanto, a member of the archdiocese’s presbyteral council who served as the parish priest of Cagayan de Oro’s Nazareno Church when the city first saw the third of the three Callejeros.

Monsanto, now the parish priest of the Our Lady of Fatima Church in Barangay Camaman-an, is among those responsible for bringing in one of the copies of the 17th-century mulatto image of a kneeling and cross-bearing Jesus Christ to Cagayan de Oro that has been attracting thousands of Black Nazarene devotees all over Mindanao each year since 2009.

It was Monsanto who asked the Quiapo Church to lend Cagayan de Oro’s Roman Catholic archdiocese one of the replicas in time for the jubilee year celebration at the city’s Nazareno parish.

Rather than lend it, the Minor Basilica in Quiapo decided to give one of the pilgrim images.

On the morning of January 5, 2009, one of the pilgrim images of the Black Nazarene arrived in Cagayan de Oro City and was brought directly to the Saint Augustine Metropolitan Cathedral, four days ahead of the first January 9 Black Nazarene procession in Mindanao.

Since then, Northern Mindanao’s capital city has been the center for the Black Nazarene devotion in the southern Philippines.

The religious icon, held to be miraculous by its millions of religious devotees, was carved by an anonymous sculptor in Mexico and was brought to Manila via galleon by Augustinian Recollect missionaries on May 31, 1606.

With Manila canceling the annual Traslacion in Quiapo due to the persistent COVID-19 pandemic, Cagayan de Oro will be the only city to stage a grand procession of the Black Nazarene, the first time in two years since the government imposed strict health restrictions to keep the deadly virus from spreading further.

Cagayan de Oro Mayor Rolando Uy issued Executive Order 159-2022 for a temporary traffic scheme in the city where thousands are expected to congregate again because of the Traslacion on Monday.

The temporary traffic scheme would be in effect from Sunday night until Monday morning, January 8 and 9.

Several roads around the cathedral and the Nazareno church, and in downtown Cagayan de Oro were also ordered closed to vehicular traffic during the period in anticipation of a large crowd during the early morning procession on Monday.

“This year’s celebration of the Feast of the Black Nazarene on January 9 will go face-to-face, provided that minimum public health standards and other safety protocols are observed,” a public advisory released by city hall read in part.

“We strongly discourage those who have flu-like illnesses from joining the procession. This is for their health,” said Dilla. – Rappler.com