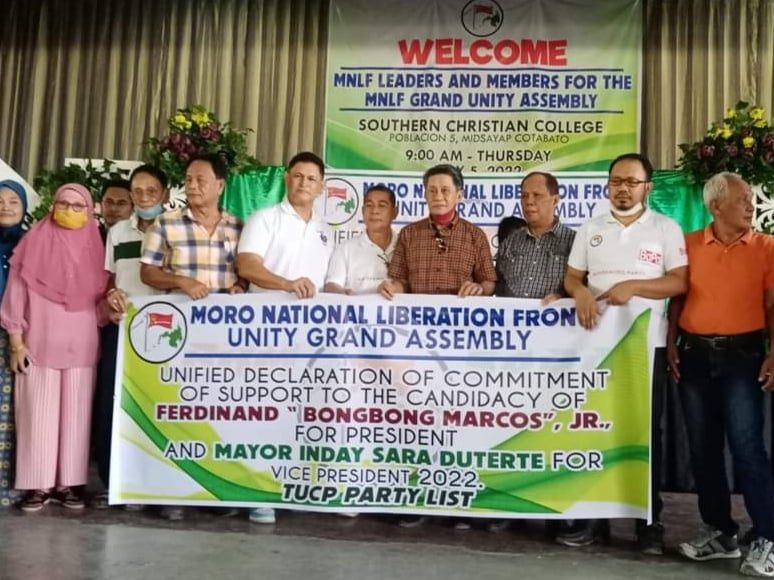 Members of the Moro National Liberation Front's council show their support for the presidential bd of former senator Bongbong Marcos during an assembly in Midsayap, Cotabato on Thursday, May 5.

Facebook Twitter Copy URL
Copied
The MNLF 'should never be a source of power by a Marcos,' says MNLF chairperson Muslimin Sema

GENERAL SANTOS CITY, Philippines – The chairperson of the Moro National Liberation Front (MNLF) and its council members are on a collision course over the presidential bid of former senator Ferdinand “Bongbong” Marcos Jr.

On Friday, May 6, MNLF chairman Muslimin Sema, who is also the minister of Labor and Employment of the Bangsamoro Autonomous Region in Muslim Mindanao (BARMM), said he cannot support the son of the late dictator Ferdinand E. Marcos.

Sema was reacting to an earlier declaration of support for Marcos Jr. by the 15-person MNLF executive council.

Muslimin Sema rejected the move, saying the MNLF “should never be a source of power by a Marcos.”

He said the late dictator was the “brains behind the disenfranchisement of Moro communities,” and the killing of many Muslims in the ’70s. The MNLF was formed to protest Marcos’ moves to further dislocate Muslims in Mindanao; it signed a peace pact with the previous Ramos administration to end its decades-old rebellion.

Sema said it was also difficult for him to forget what happened to him during the years when the Marcoses were in power.

He said he suffered mental torture when he was jailed for six months, and his family was forced to abandon their ancestral home during the Marcos years.

In a joint statement on Saturday, May 7, Sema and Murad declared their support for the presidential bid of Robredo, but also openly endorsed Duterte for the vice presidency.

“The overriding considerations in taking such a stand are the Bangsamoro peace process, the full implementation of all signed peace agreements and the interest of the Bangsamoro people,” they said.

In Midsayap town, Cotabato, on Thursday, May 5, Muslimin’s brother Romeo said that despite the dark days of the Marcos regime that gave birth to the MNLF, the Front’s executive council decided to support Marcos after they were promised that he would continue the peace process in the BARMM.

He said the December 23, 1976 Tripoli Agreement, which he called “the mother of all agreements” between the government and the Bangsamoro, was made during the Marcos years.

Marcos also promised them during a meeting that he planned to continue with the path President Rodrigo Duterte took regarding the peace process in Mindanao. – Rappler.com