TORN-UP EXTERIOR. A resident checks on the structural damage on her property in the historic city of Vigan in Ilocos Sur after a magnitude-7 earthquake. Bureau of Fire Protection

Facebook Twitter Copy URL
Copied
The government will deploy a team of heritage and cultural experts to assess damage to historic churches, houses, and other structures

This was the appeal of the National Commission for Culture and the Arts (NCCA) as it prepared to deploy a technical team to Abra, Ilocos Sur, and Ilocos Norte to assess earthquake damage to heritage churches, houses, and other historic buildings.

“Until our team gets there, that’s our appeal – to set aside the debris somewhere safe and not throw them,” said NCCA chairperson Rene Escalante in Filipino on Thursday, July 28, during a press conference in Manila.

“We have instructions to heritage advocates to secure the important cultural properties. Example, the religious images and icons, place them in an area where it won’t fall in case of aftershocks. Same with the paintings,” he also said. 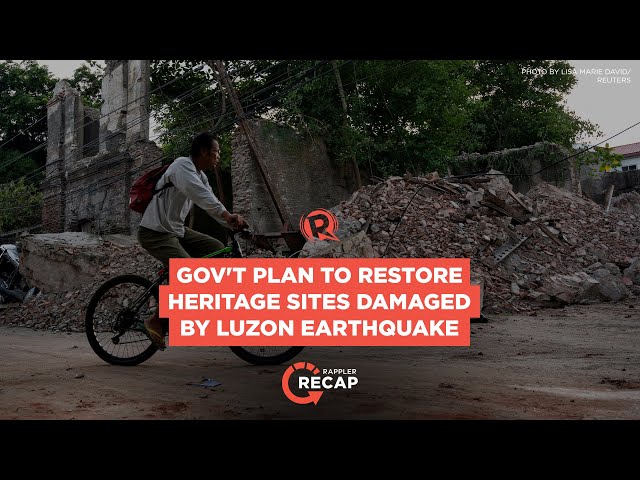 The government is sending a team of experts from the NCCA, National Historical Commission, National Museum, National Archives, and National Library to head to the three Northern Luzon provinces next week, said Escalante.

The reason for the schedule is to allow local governments and volunteers time this week to attend to their more urgent personal concerns – like their safety and that of their homes and property.

The mission of the technical team would be three-fold – to do a more comprehensive assessment of the damage, determine the amount needed for restoration works, and check on other cultural properties or cultural workers affected by the magnitude-7 quake.

They will also check on the archidiocesan archives and museum of the Palacio de Arzobispado de Nueva Segovia in Vigan, the country’s only surviving 18th century arzobispado.

One danger that the team will be watching out for is whether or not the ground on which the heritage structures are standing on was affected by liquefaction. Liquefaction is when intense ground shaking substantially reduces the strength and stiffness of soil, making it behave like liquid.

“We have to do a lot of studies to make sure these structures did not get sink holes and liquefaction because it would be a waste of money to restore a building if it’s not anymore standing on stable ground,” said Escalante.

When will the damaged churches be restored?

He expressed the same optimism for all of the damaged heritage sites so far reported. He gets his confidence from the successful restoration of Bohol and Cebu churches after the magnitude 7.2 temblor in Bohol in 2013.

But it was only last December 2021 when the government declared that all damaged Bohol church structures had finally been fully restored. The earliest to be restored was Loon Church, in December 2016. The last to be returned to its former glory was Maribojoc Church, just last December 2021. This means it had taken almost a decade to restore the most severely damaged buildings.

But the damage sustained by the churches from the Luzon quake was not as bad, said Escalante. The worst cases involved the toppling of the upper portions of towers, like in the case of Bantay Bell Tower and Tayum Church (Santa Catalina de Alejandria Parish Church).

“It will probably take half the time it took the churches in Central Visayas and Eastern Visayas… Five years will be a very reasonable time table,” said Escalante.

To aid the government team, he asked volunteers, owners of heritage houses, and staff of damaged churches to carefully store the debris that fell from the historic buildings. These parts, like pieces of walls, bricks, or balustrades, could still be used in restoration work. They could either be returned to the original structure, or used as reference points to enable architects or conservationists to faithfully recreate the building’s design.

“The general rule is don’t throw those items from the building and if they can store it, ideally they should mark it where [in the building] it came from… When our teams get there they will be able to say if those elements are needed or not. It will be our team who will determine this,” said Escalante.

He recalled how, in past calamities, people tended to prioritize cleaning up the debris because they saw it as “kalat” or “mess,” without realizing the value they still held.

Escalante attributed the success of the 2013 quake heritage restorations to how the administration of the late president Benigno Aquino III set aside a lump sum of P1 billion from calamity funds for reconstructing the damaged buildings.

They would likely ask for a lump sum again this time around, because none of the cultural and heritage agencies have emergency or calamity funds reserved for situations like this.

Previous efforts to give NCCA or NHCP calamity funds for unexpected damage to heritage or cultural sites did not prosper, said the cultural commission chief.

Another tricky issue with restoration funding this time around is what to do about the heritage houses in Vigan City, for instance, which were damaged by the tremor. These houses, though identified as historic treasures, belong to private individuals.

“We need guidance from our lawyers because we know we cannot appropriate public funds for private property,” said Escalante.

In the meeting cultural officials held before the press conference, they had spoken with lawyers from the Office of the Solicitor-General about the possibility of getting a legal opinion exempting privately-owned heritage houses from the rule.

One possible compromise, said Escalante, is that these houses may be expected to allow public access to a portion of their historically-significant home, similar to a museum.

Depending on the amount of funding the cultural agencies get, not all heritage houses may be given restoration assistance. The government would have to choose the houses that are in most need of it, over houses owned by families or entities who can afford the restoration by themselves. – Rappler.com