Facebook Twitter Copy URL
Copied
All plastic waste in seas and oceans come from land, whether dumped by local societies or carried by trade winds and currents

LEGAZPI CITY, Philippines – Erden Eruc’s focus on human-powered transport in his global adventures means he sees up close the pollution in oceans and countries’ internal waters.

The 60-year-old world lone rower disembarked in his yellow row boat from Legazpi City on March 24, nine months or 239 days since he left Crescent City in Northern California on June 21, 2021. He had paddled across the earth’s circumference along the equator, a journey of 42,472.2 kilometers (26,391 miles).

The Turkish-American says his 18 world records have a purpose: to draw attention to critical levels of plastic waste choking life out in huge swathes of the earth’s oceans.

Most discussions on the health of oceans will include the ‘garbage plastic patch.” The National Geographic defines it as two separate collections of marine debris in the North Pacific Ocean.

Eruc told Rappler in an interview that he did not see the garbage patch.

“As a rower, I need to follow the currents and the winds that necessarily take me around these big gyres formed though the rotating ocean currents,” he explained.

But the rower said he encountered a lot of garbage along the way, especially as he came closer to the Philippines.

“As I came, I was seeing them maybe once a week, like plastic wrapper, Styrofoam materials. And then as I came closer to the Philippines, I started seeing them every hour. The concentration of plastic garbage in the water went up because the wind and currents carried all of them, polluting the shores of the Philippines,” he said.

Eruc described the Philippines as “a big dam that filters as the water hits the shores.”

“Water moves but the plastic garbage stays,” he pointed out. “So, we have to make an effort to clean our beaches so that the plastic that arrives doesn’t go back into the ocean.”

“The garbage is there because of the irresponsible behavior of other nations and of the people. It is our task to make it (the sea) clean,” he told Rappler.

The adventurer and environmentalist urged leaders and residents of coastal communities to clear shorelines of plastic waste as marine animals like whales and sharks, and birds that feed from waters, could choke on trash. 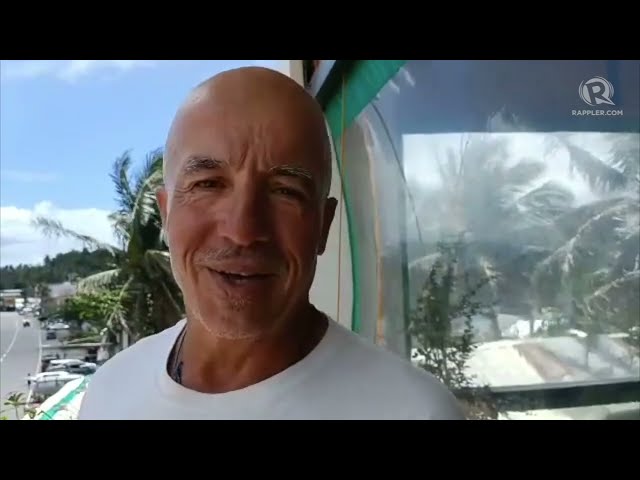 As soon as he disembarked from this city, Erden was met and assisted by officials of Albay’s Provincial Tourism, Culture and Arts Office led by Dorothy Colle and DOT director Herbi Aguas, as well as Philippine Coast Guard, Philippine National Police, and Bureau of Customs officials. “The Philippines is a long way from northern California, 112 degrees in latitude due west,” Erden said.

“I feel so welcome among the Albayanos who are kind, accommodating, modest, friendly and enthusiastic all at once,” he said.

Eruc is an ocean ambassador for Ocean Recovery Alliance, a non-profit that champions new technologies, innovations, creativity and collaborations to solve issues challenging the health of oceans. He also helps Dr. Jay Barlow of the US National Oceanic and Atmospheric Administration (NOAA) in his survey of beaked whales. – Rappler.com