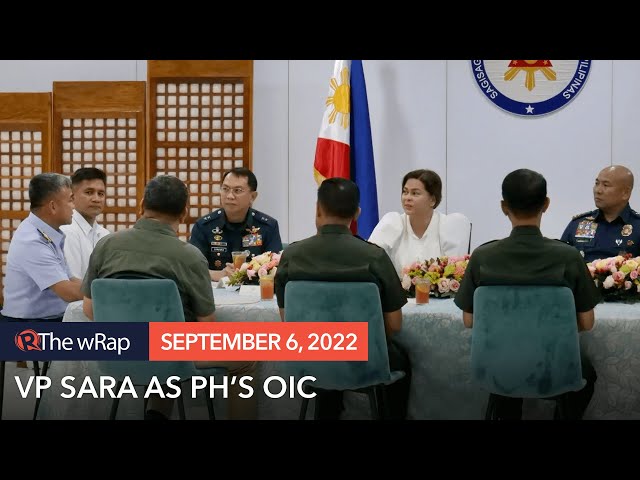 MANILA, Philippines – At a sparsely-decorated hall inside the Department of Education (DepEd)’s central office, eight uniformed men stood in attention, waiting for the woman who, in her 2022 running mate’s own words, had once wanted to be defense chief.

Vice President Sara Duterte, who’d end up with the education portfolio instead, met with commands and deputies of the country’s security sector on Monday, September 5, her first workday as the country’s interim top official.

Duterte is officer-in-charge of the Philippine bureaucracy while President Ferdinand Marcos Jr is in Indonesia and Singapore for his state visits.

“Our objective was to strengthen existing coordination and enhance inter-agency cooperation on issues concerning national security and our country’s development,” said Duterte, speaking to media after the lunch meeting.

Duterte was joined by officials from both the Office of the Vice President and the Department of the Education in meeting the following officials from the security sector:

Again speaking to media after the meeting, Duterte spoke of needed a “hardline” stance against criminals and terrorists.

“As the caretaker, may I reiterate the Marcos administration’s direction towards aggressively pursuing programs and projects that will address social inequities and further propel the country’s progress post-pandemic,” she said.

“But the realization of our national aspirations could be slowed down, held up, or hostaged altogether by forces motivated to derail our progress off the track,” she added.

The rhetoric – of forces that seek to “derail” the government’s plans – is nothing new from Duterte. The Vice President, daughter of Marcos’ immediate predecessor, has used the same kind of language against supposed communist forces.

She has also red-tagged and gone into a verbal sparring match against the Makabayan bloc, one of the few groups in the political opposition of the Marcos-Duterte administration.

Security and defense has long been an interest of the younger Duterte. She is a reservist in the Army and, for a short time, was supposedly eyeing the Defense Secretary post under Marcos.

The Vice President, under Philippine laws, does not have a defined role in government but is usually appointed a Cabinet post, depending on their relationship with the incumbent president.

Vice President Duterte also discussed with security officials the plan to make Reserve Officers’ Training Corps mandatory for Grade 11 and 12 students. Marcos had listed mandatory ROTC as among priority legislation during his first State of the Nation Address (SONA).

According to Duterte, they discussed “ways forward… to give meat [to the] declaration ng ating pangulo na ibalik ang (of our President to being back) ROTC as mandatory requirement for citizens,” she said.

Duterte is the first Vice President in a long time to be designated OIC while the President is out on official business. – Rappler.com