Calida, who campaigned for Marcos in the 2016 elections, submitted a Motion for Inhibition against Leonen on Monday, November 9, only hours after Marcos filed his own.

Calida is not a party to the protest case. Both motions cited more or less the same reasons, with citations to a report on the Manila Times about a leak from the Supreme Court itself.

Like Marcos, the Office of the Solicitor General (OSG) cited Leonen’s dissenting opinion to the decision that granted dictator Ferdinand Marcos Sr a hero’s burial, where the justice wrote about abuses during Martial Law.

Calida – who supported a Duterte-Marcos tandem in 2016 before President Rodrigo Duterte named him solicitor general – said Leonen had “personal biases against the late President Marcos and his family.

(Watch Calida’s February 2016 interview about supporting a Duterte-Marcos tandem in the Rappler video below.) 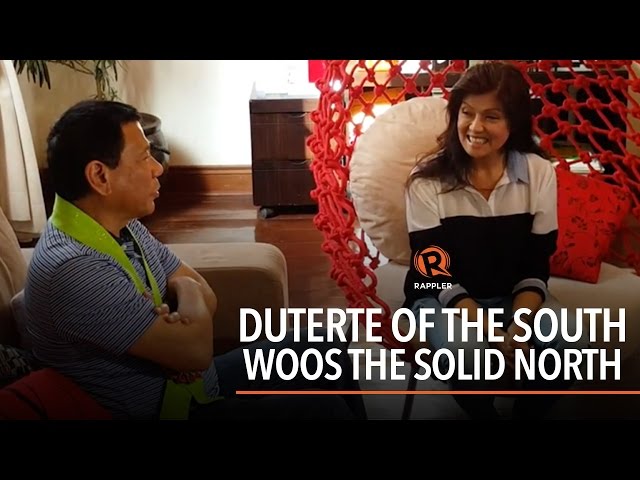 “It is all too clear that Justice Leonen’s scornful remarks in his dissent…established his hatred towards the Marcos family,” said the OSG’s 40-page motion signed by Calida and 19 assistant solicitors general.

Both Marcos and Calida also cited reports on the Manila Times about Leonen’s leaked reflections in the early stage of the case, when the justice leaned toward dismissing the protest.

Leonen wasn’t case lead yet at the time. It was re-raffled to him after the original case lead, Associate Justice Benjamin Caguioa, voted to dismiss the protest in October 2019 but lost to the majority that included Leonen.

Calida also blamed Leonen for what the solicitor general said was a violation of Imelda Marcos’ right against double jeopardy in a dollar-salting case.

Imelda was acquitted by a regional trial court in the case, but became a Supreme Court case around 2010 when the late solicitor general Frank Chavez appealed it all the way to the High Court.

Calida acknowledged that Leonen wasn’t even with the Supreme Court in 2010 (he was appointed only in 2012), but because Leonen inherited that case and became member-in-charge, Calida blamed the justice for how it panned out.

Leonen, however, eventually affirmed Imelda’s acquittal in a decision in 2018, but Calida said “despite her acquittal, Mrs Marcos lost as she was constrained to relitigate for an additional period of more than 10 years.”

Earlier on Monday in a virtual press conference, Marcos denied talking to Calida or the OSG about efforts against Leonen.

Calida had not filed his motion yet at the time of the press conference, but Marcos said: “If he does in fact move to support our motion, then it means he agrees with our arguments. I think we are moving independently, we have come to the same conclusion.”

Marcos also denied being involved in the so-far fruitless efforts of Calida and notorious lawyer Larry Gadon to get Leonen’s Statements of Assets, Liabilities and Net Worth (SALNs) for the purposes of initiating a quo warranto petition to oust the justice.

It was Gadon who gave media the first few pages of Calida’s motion to inhibit.

The request for Leonen’s SALNs had taken off from the column of Rigoberto Tiglao published in the Manila Times alleging irregularities in the justice’s SALNs.

The Manila Times was largely cited in Calida’s motion to inhibit, using columns published on the paper to say that the delay in the case proceedings “resulted to lingering doubt on Justice Leonen’s impartiality.”

What is Calida’s standing in the case?

While Calida is not technically a party to the case, the Solicitor General defended why he filed a pleading.

“As the people’s tribune, it is therefore incumbent upon the OSG to present this Honorable Tribunal a legal position it perceives to be in the best interest of the State,” said the motion.

The people’s tribune power has been repeatedly used by Calida to use the OSG to run after perceived critics of the Duterte administration, such as opposition figures Leila de Lima and Antonio Trillanes, and even critical media organizations Rappler and ABS-CBN.

The OSG is the statutory counsel of the government, a function that the office also used to justify its participation in helping the police sue Vice President Leni Robredo for inciting to sedition. The Department of Justice (DOJ) eventually cleared Robredo in that complaint.

But as government’s statutory counsel, Calida dropped the Commission on Elections (Comelec) in the threshold issue of this protest case, in order to favor Marcos.

In reaction to Calida’s move, Robredo posted a shady tweet around 8:10 pm – what appears to be her informal response to Calida backing Marcos.

The Vice President took a screenshot of One News’ tweet about Calida filing his motion. Robredo then tweeted the photo with the caption, “lols,” a variation of the internet slang for “laugh out loud.”

She has yet to formally issue a statement on the matter.

Also on Twitter, Robredo’s lawyer Emil Marañon said: “If (Calida) has abandoned Comelec (its client) in the threshold issue and sided with Bongbong Marcos, then what is his standing in the protest proceeding in the PET?”

– with a report from Mara Cepeda/Rappler.com