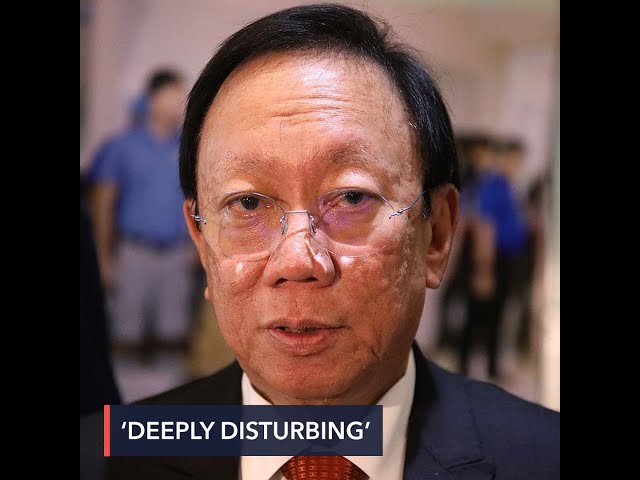 The Supreme Court, sitting as the Presidential Electoral Tribunal (PET), said it was “deeply disturbing” that Solicitor General Jose Calida joined the motion to inhibit filed by Bongbong Marcos in the vice presidential electoral protest.

“That the mistaken view (by Marcos) of this court is joined by no less than the Solicitor General is deeply disturbing,” the Supreme Court said in a November 2020 resolution which was made public on Thursday, January 21.

The Supreme Court in November last year denied Marcos’ motion to inhibit case lead Associate Justice Marvic Leonen from the protest. Calida filed his own motion to inhibit hours after Marcos did, although the latter denied that it was a coordinated move.

The Supreme Court questioned why Calida would involve the OSG in a private case like the vice presidential electoral protest, in a motion that was almost a carbon copy of what Marcos filed.

In the resolution, the Supreme Court said it would rather focus on the merits of the protest for now.

Leonen suggested that Calida’s actions “such as (his) statement that (he) is acting as the Peoples’ Tribune and its breach of confidentiality may be addressed separately at a much later time.”

The Supreme Court warned Calida not to invoke his position as People’s Tribune haphazardly.

“The standing asserted by the Solicitor General should be reviewed. People’s Tribune is not to be hoisted wantonly in big ticket cases involving private parties,” said the Supreme Court.

Calida has been throwing the People’s Tribune card a lot in several cases to run after perceived critics of the Duterte government, raising questions about how the resources of the Office of the Solicitor General (OSG) are being used under the president.

“This Tribunal reminds the OSG that it has been previously admonished that in future cases, the OSG should be more cautious in entering its appearance to this Court as the People’s Tribune to prevent further confusion as to its standing,” the Supreme Court said.

The resolution was not attributed to an author, called as a per curiam ruling, but it was signed by 12 justices. Associate Justices Rosmari Carandang and Amy Lazaro Javier were on wellness leave. There is one vacancy.

The Supreme Court is currently deliberating the OSG and Commission on Election (Comelec’s) legal briefs about the disputed votes in 3 Mindanao provinces, where Marcos alleged fraud.

For the OSG, the Supreme Court could annul the elections in those provinces if it determines there is fraud. This position would result in a Marcos victory, because eliminating votes from those provinces would wipe out the national lead of Vice President Leni Robredo.