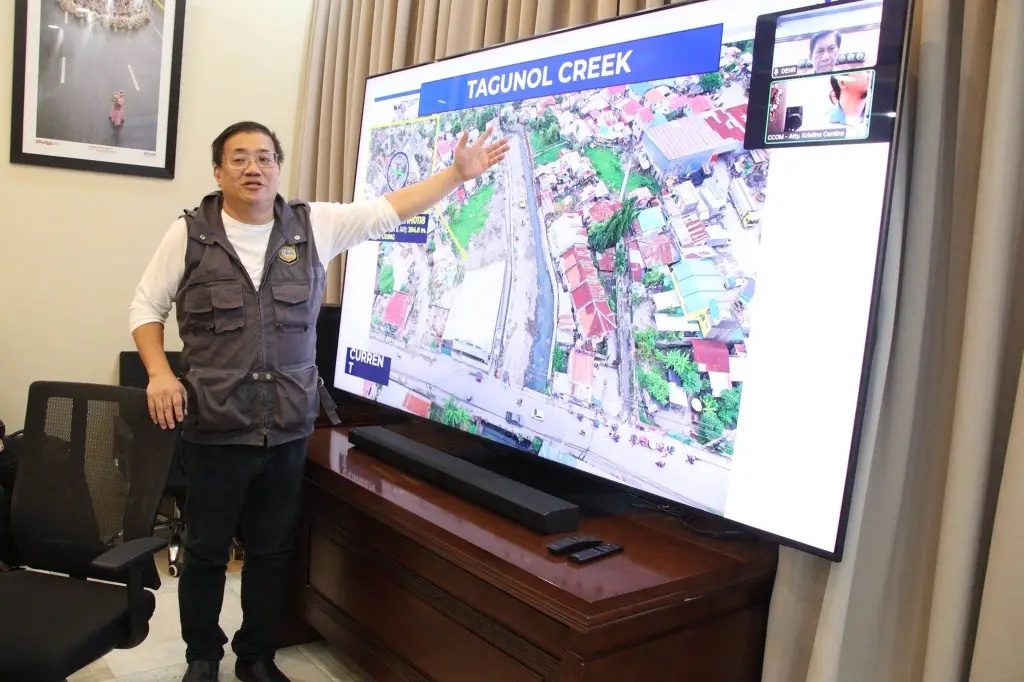 FLOOD CONTROL. Cebu City Disaster Risk Reduction and Management Council Chairman Lawyer Gerry Carillo points out an area at the Tagunol River where potential for more floods loom as the DPWH abandons its river-widening effort due to lack of funds for right-of-way acquisition.

Facebook Twitter Copy URL
Copied
Aside from the lack of funds for right-of-way acquisition, a court case against the projects, and incomplete relocation programs for informal settlers hamper the program

CEBU, Philippines – The Department of Public Works and Highways in Central Visayas (DPWH-7) has temporarily halted the river-widening projects at the Tejero Creek and Tagunol River in Cebu City.

In a meeting with city officials on Tuesday, December 6, June dela Cruz, head of the DPWH-7 project maintenance division, explained that their request for right of way (ROW) funding was not approved.

The ROW fund is used to pay for private property that need to be cleared for the completion of government projects.

Both projects were part of the agency’s comprehensive drainage master plan from 2017.

The project maintenance head mentioned that there were also owners who filed a court case against DPWH, preventing them from completing the projects.

According to Dela Cruz, flood-mitigating barriers were already set in place at the side of the Tagunol River but they were unable to complete the job due to the ongoing court case.

“We have also struggled in the relocation of illegal settlers in the area because we can’t proceed without providing relocation,” Dela Cruz added.

Officials warned of worse flood problems since the projects were left unfinished.

This would involve reconstructing container vans into temporary livable shelters.

“There is an existing P30 million from DWUP (City’s Division for the Welfare of the Urban Poor) which was intended for a medium-rise building (MRB) – maybe we can use that,” Carillo said.

Castillo added that Rama vowed to build 200 to 300 medium rise buildings for the displaced families before the end of his term in 2025. (READ: Housing gets biggest slice of Rama’s P50-B proposed 2023 budget for Cebu City)

As of this writing, the city government has mobilized a digital profiling platform to identify the actual number of households and residents residing along the city’s major rivers. – Rappler.com