SAMAR ENCOUNTER. A police officer retrieves the body of a suspected rebel in the waters off Tarangan town, Samar, on August 25.

After days of saying the military could not confirm if communist rebels were the occupants of a motorized boat that exploded in waters around 17 kilometers north of Catbalogan, Samar, De Leon told Rappler that they now “have strong reasons to believe that they were the reported NPA VIPs (New People’s Army very important persons).”

The military officer said he had sent a retrieval team to check the remains of two more bodies found near the islet of Libacun Gute.

Soldiers on Thursday, August 25, also retrieved the remains of a suspected rebel after residents of the adjacent bigger island of Libacan Daku fished these out of the sea.

If the new reports pan out, De Leon said, “then we would have accounted for four NPA terrorists dead in off-shore encounter.”

Fishermen on Tuesday morning, August 23 found debris of a motorized boat and the remains of a woman off the coast of Tarangnan. 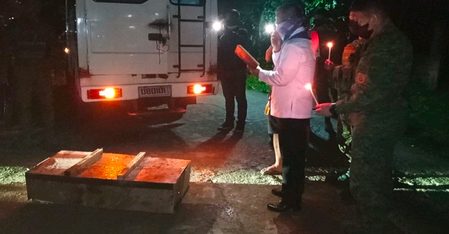 De Leon also told Rappler on Friday that he was overseeing “massive military operations” against communist rebels in the mountains of Samar, in Eastern Visayas.

Police authorities said they would need time to establish the identities of the recovered bodies as the samples collected for DNA testing need a match from a relative.

No persons so far have shown up to claim relationship with any of the suspected rebels.

De Leon did not mention names but his mention of VIPs referred to August 22 social media claims that among the dead in that encounter encounter were Benito and Wilma Tiamzon, top officials of the Communist of the Philippines (CPP).

The couple was arrested in Cebu City in 2014 but allowed to post bail for the 2016 peace talks between the National Democratic Front (NDF) and the Duterte’s government. The Tiamzons went back underground in late 2017 when Duterte ended peace talks. A Quezon City regional trial court convicted the couple in November 2020 of kidnapping and serious illegal detention.

Government forces have been doing search and retrieval operations in Samar waters since August 22, when soldiers tried to interdict a boat following a tip about reported armed persons loading boxes.

The military earlier said there was no clear identification of what the armed group was, and that the waters off Samar were also used by various criminal groups.

But on Friday, De Leon said the August 22 operation followed “info from tipsters that NPA VIPs will be moving out from the area being saturated by our ongoing offensive operations.”

The body found on August 25 was of a male,  according to a composite search and retrieval operations team from Philippine Coast Guard, Philippine National Police, PNP-Scene Of the Crime Operatives, and AFP’s Joint Task Force Storm.

Tarangan is 16.9 kilometers north of Catbalogan, the provincial capital, where task force officials on Monday, August 22, confirmed reports that a motorized boat being chased by military forces had exploded in nearby waters.

De Leon said assets and personnel deployed to the area were following the drifting pattern of the current to track other possible fatalities.

The military, he added, has sought help from the Samar Provincial Disaster Risk Reduction Management Office to boost the efforts of the Tarangnan local government unit.

“This way, we can hasten the search and retrieval process and relieve personnel involved in the operations,” De Leon said. – Rappler.com